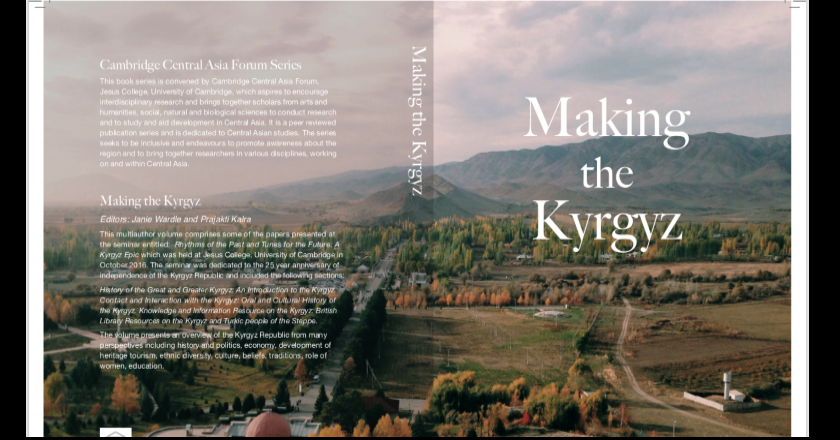 Political, social and economic changes in the Kyrgyz Republic at the turn of XX and XXI centuries contributed to changing lifestyles and traditional way of life of the indigenous population. Thus, one of these results was the labor migration in countries near and far abroad, mainly in Russia. Kyrgyz, integrate, as an ethnic group in the 2000s in the Russian society, are still unexplored subject for researchers. And through this work we would like to make a historical review for readers in the family tradition and attitude of my people.

NATURAL SHOCKS AND MIGRATION DECISIONS: THE CASE OF KYRGYZSTAN
Chernina E. Basic research program. WP BRP. National Research University Higher School of Economics, 2019. No. 214.
New Bukhara: An “Island” Of Russia In Central Asia
Почекаев Р. Ю. Law. LAW. Высшая школа экономики, 2018. № WP BRP 86/LAW/2018.
This paper is devoted to the characteristics of the city of New Bukhara, the “capital” of the Russian settlements in the Bukharan Emirate. It was originally established as a station on the Trans-Caspian railway but soon transformed into the Russian business and cultural center in the Emirate. It had specific status being a Russian enclave in the Bukharan Emirate which was de jure an independent state. However, the information on this city is contradictory. Some visitors stated in their notes and memoirs that it was a large city with well-developed infrastructure, others characterized it as a little settlement, “a poky hole” without any common features with towns of Russia and Europe. According to other materials New Bukhara was the real administrative center of Russian settlements in the Bukharan Emirate, while others state that it was only the residence of the Russian diplomatic representative in the Emirate. The author analyzes legal documents, other official information, notes from travelers and another contemporaries to establish a view on the real New Bukhara, to answer the question on status of New Bukhara in the Bukharan Emirate and in the Russian Empire.
The Eurasian Economic Union: An EU-Like Legal Order in the Post-Soviet Space?
Karliuk M. Law. LAW. Высшая школа экономики, 2015. No. WP BRP 53/LAW/2015.
The Eurasian Economic Union (EAEU) is an emerging regional organization of economic integration in the post-Soviet space. Following the limited success of previous integration attempts, it seeks to pursue deeper integration, borrowing features from the EU. The EAEU possesses a complex system of elements of an emerging legal order, some of which have distinct similarities with the EU, but others are decisively different. This paper analyses these features in order to find whether the legal changes that accompany the creation of the new entity allow ensuring the effective functioning of the EAEU and whether the respective legal order is autonomous similar to that of the EU. The author argues that the EAEU lags behind the EU in terms of the autonomy of the legal order and in its ability to ensure the effective functioning of the organization. Supranational features are limited, while it relies predominantly on intergovernmental elements with a view to preserve the interests of all Member States.
Трудовая миграция и трудоемкие отрасли в Кыргызстане и Таджикистане: возможности для человеческого развития в Центральной Азии
Карабчук Т. С., Костенко В. В., Зеликова Ю. А. и др. СПб.: Центр интеграционных исследований ЕАБР, 2015.
Кыргызстан: нелегкий путь к основам правового государства
Мишина Е. А. В кн.: Доктрины правового государства и верховенства права в современном мире. Международный симпозиум, Санкт-Петербург, 21октбяря 2013. М.: Междисциплинарный центр философии права, 2013. С. 148-163.

This article addresses reforms that took place in Kyrgyzstan within last two decades and  provides a comprehensive description of changes that were enforced under the rule of Askar Akayev, the first president of independent Kyrgyzstan. The focal points of the article include specifics of transformation of the national constitutional system, achievements of the Kyrgyz judicial reform,  the unique courts of aksakals that play an important role in administration of justice.

This working paper was prepared by the Russian International Affairs Council (RIAC) in cooperation with the National Institute of Strategic Studies (NISS) of the Kyrgyz Republic as a part of the "International migration: trends, challenges and prospects" project. The working paper analyzes the main trends in migration in the Kyrgyz Republic in the context of its entry into the Eurasian Economic Union. The paper explores the main trends in migration policy in Russia and Kyrgyzstan, the causes of emigration from the KR to Russia, the accommodations of Kyrgyz labor migrants in Russia, new conditions emerging with the entry of the Kyrgyz Republic into the EEU. The authors of the Working paper offer their vision of likely migration scenarios and their recommendations for  more favorables migration regimes in country the the migrants' origin and for the host country.

We empirically study the asset side of market discipline in the banking system of the Kyrgyz Republic, examining whether borrowers are willing to pay higher interest rates to high-quality banks. Based on dynamic panel models and a dataset with bank information from 23 banks over the period 2010–2012, our findings suggest the presence of market discipline induced by borrowers. In other words, banks with higher capital ratios and liquidity charge higher interest rates on loans. This result has several implications for the banking policy in Kyrgyzstan, where we can recommend to policymakers a disclosure policy following the Third Pillar of Basel III, because not only can the bank's creditors use bank information to penalize the excessive bank risk, but borrowers can also use this information to discipline their banks.