This chapter examines an emerging regional security system in the Arctic. There was a significant shift in the Arctic powers’ threat perceptions and security policies in the High North. In contrast with the Cold War era when the Arctic was a zone for the global confrontation between the USSR and the U.S./NATO, now this region is seen by international players as a platform for international cooperation.The Arctic countries now believe that there are no serious hard security threats to them and that the soft security agenda is much more important. The military power now has new functions, such as ascertaining coastal states’ sovereignty over their exclusive economic zones and continental shelves in the region; protecting the Arctic countries’ economic interests in the North, and performing some symbolic functions. The Arctic states believe that the regional cooperative agenda could include climate change mitigation, environmental protection, maritime safety, Arctic research, indigenous peoples, cross- and trans-border cooperative projects, culture, etc. 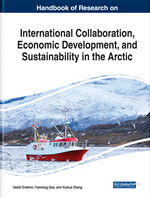 Handbook of Research on International Collaboration, Economic Development, and Sustainability in the Arctic
Sergunin A. A. Chicago: IGI Global, 2019.
Similar publications
Science, Geopolitics and Culture in the Polar Region: Norden beyond Borders
Edited by: S. Sorlin. Farhnam: Ashgate, 2013.

Field Stations on the Coast of the Arctic Ocean in the European Part of Russia from the First to Second IPY
Lajus J. In bk.: Science, Geopolitics and Culture in the Polar Region: Norden beyond Borders. Farhnam: Ashgate, 2013. Ch. 5. P. 111-142.

This chapter is a first attempt to study the development of different kind of field stations in the western sector of the Russian Arctic in theperiod from the First to Second International Polar Years (1882 - 1933). As more or less independent entities, marine biological and polar meteorological stations were on different sides of the process but were interconnected through the people involved and the filed research practices implemented.Three major concerns influenced the development of field studies in the Russian Arctic – navigation, demands for the efficient use of natural resources and the political–military strategy of keeping land and their surrounding seas under Soviet control. Stations gradually moved further north from the sub-Arctic to the Arctic islands.The scientific network in the Arctic was initially established through the confrontation between interrelated sites of knowledge – field stations and research vessels – before their merger and placement in the same centralized network, which subsequently became very efficient with the introduction of aviation. The stations were not just crucial places for knowledge production but also places for the transfer of scientific, primarily tacit, knowledge about observations and laboratory analysis. They also maintained a specific culture of field sciences. By the time of the Second IPY in the Soviet Arctic, a distinct shift could be seen from broad international cooperation to a centralized national network and from scientific, educational and local economic objectives to military, geopolitical and broader economic interests.

Until fairly recently, Russia’s defense-industrial complex was targeting primarily external markets, with Asia-Pacific countries among the largest buyers of its products. Currently, the priority is shifting towards rearmament and the modernization of Russia’s own Armed Forces, write Victor Sumsky and Evgeny Kanaev. What does this mean for the region?