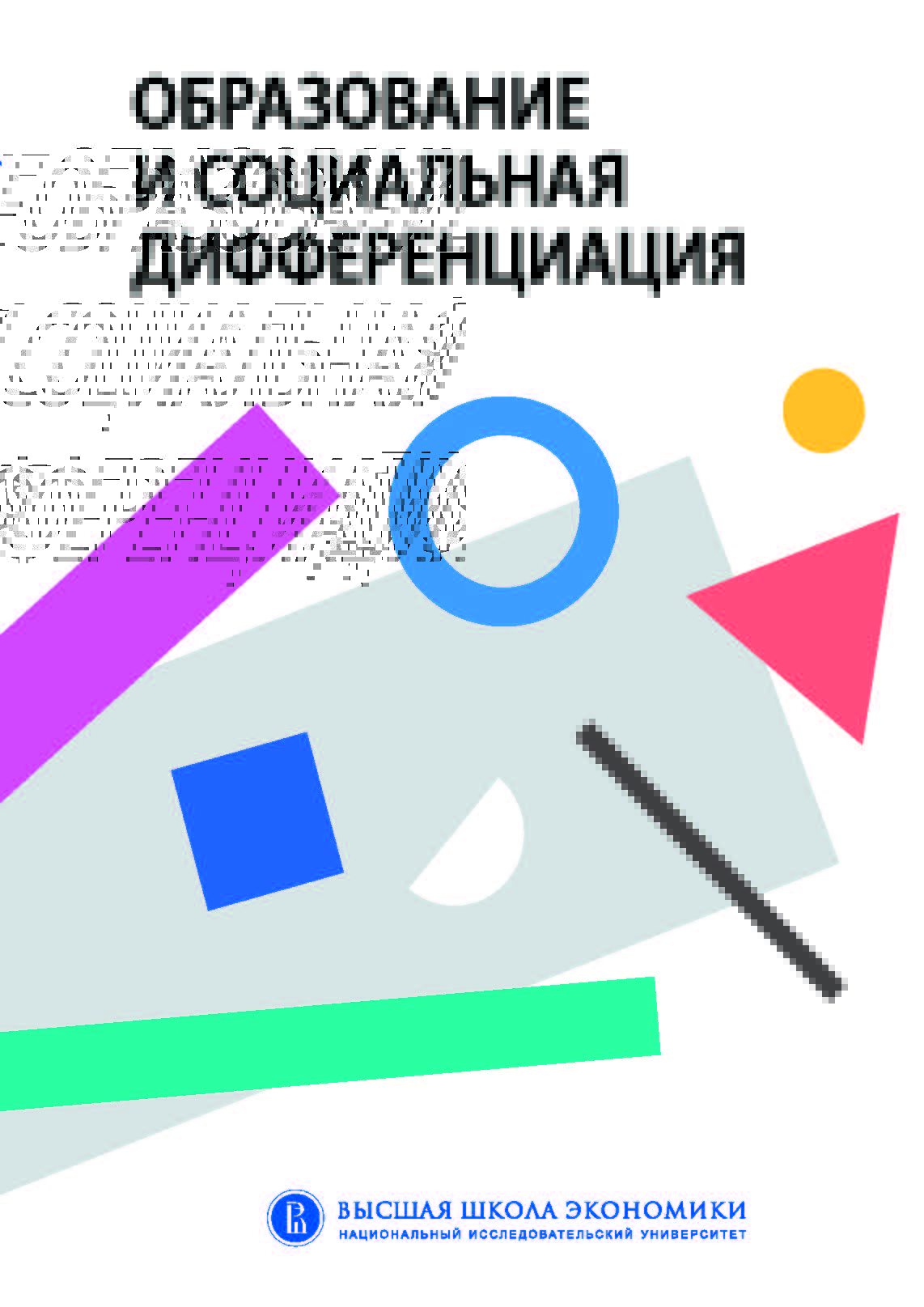 Образование и социальная дифференциация: коллективная монография
Edited by: М. Карной, И. Д. Фрумин, Н. Н. Кармаева М.: Издательский дом НИУ ВШЭ, 2017.
Similar publications
Migrant children in Russia. I. Migration, ethnicity and segregation in St. Petersburg
Alexandrov D. A., Baranova V. V., Ivaniushina V. A. Sociology of Education and Science Laboratory Working Papers SESL. WP 001. Sociology of Education and Science Laboratory, 2012. No. 1.
The paper presents first findings of large-scale study of children from migrant families (104 schools, 419 classes, 7380 students) carried out in St. Petersburg. Researchers discuss the issues of ethnic and social differentiation among schools, parents’ interaction with schools, teachers’ attitudes to migrant minority students, ethnic effects in communication among students. A multi-level regression modeling demonstrates the effects of migration status and ethnic status on academic performance. The study shows that migrant children from ethnic minority groups have higher levels of learning motivation than their local-born classmates, perform at school on the same level, and have educational plans similar to those of ethnic majority students. Social network analysis (p2 modeling) of multiple class networks shows the absence of discrimination on the part of the ethnic majority in relation to the ethnic minorities.
The Socio-Economic Differentiation of Population: a Comparative Analysis of Russia and Europe
Yastrebov G. Научные доклады Лаборатории сравнительного анализа развития постсоциалистических обществ. WP17. Высшая школа экономики, 2010. No. 02.
In this preliminary paper I am trying to distinguish and explain some differences in character of social and economic inequality between West and East-European societies with a special focus on Russia. More exactly, analyzing the well-known data set of the European Social Survey 2006/2007 I show that there is a far stronger degree of matching between individual occupation, education and income in better developed European countries than is observed among the post-socialist states. To emphasize this finding I also look at the differences in patterns of intergenerational mobility, according to which the post-socialist societies are far less mobile and ‘meritocratic’ than their Western counterparts. The main theoretical argument behind this, I suggest, is the incompatibility of modern ‘capitalistic’ institutions, such as private property and market, with historical and cultural contexts of development in post-socialist countries. To test this argument I develop the corresponding scale and superpose it with my empirical findings. From this point of view Russia is regarded as one of the least successful cases of transformation, since the initial conditions of its social change were less consistent with the logic of Western modernization, which stood behind the radical reforms of the 1990s, than in any other post-socialist European country.
Displacement of habitants in Moscow urban space and the perception of unwanted neighbors: social exclusion framework
Strelnikova A. In bk.: States and nations between local and global. M.: 2009. P. 102-110.

States and nations between local and global
Edited by: K. Ostrowski. M.: 2009.

This chapter explores changes in the relationship between social inequality and the use of childcare arrangements in Russia between 1994 and 2012. These changes are evaluated against changes in the context surrounding the system of childcare provision throughout the post-Soviet period. In particular, we consider the following changes: increasing household competition for state-subsidized childcare provision and its differentiation, the adoption of neo-familialist social policies in the 2000s, and the growing relevance of informal relations in securing access to formal childcare services. To empirically investigate the changes in the use of childcare arrangements by different types of families we rely on data from the Russian Longitudinal Monitoring Survey (1994–2012). We find that families with higher social standing are more likely to participate in formal public childcare, although inequality in access has slightly decreased in the 2000s. On the other hand, inequality increased with regard to expenditure on external childcare, which suggests that more advantaged families switched to different forms of childcare. This is partly corroborated by the fact that these families use formal public childcare less intensively, possibly by exposing their children to other types of childcare. Social inequalities also exist in informal childcare arrangements; whereas more advantaged families generally make wider use of these arrangements, they are less likely to limit themselves to exclusive parental care, which is more widely spread in the less advantaged families. The patterns of informal childcare remained largely unchanged throughout the period considered.

Sociological research can and should become a scientific basis for formation of social policy, allowing to mitigate the growing negative phenomena in society. Study of the causes of social inequality, tendencies of deepening or weakening of signs of differentiation society, international experience of state and public response negative social indicators, national and regional practice of influencing various manifistations of inequality of both local and national character - the most important directions of the fundamental and applied sociological science.

The collection presents reports of more than 1300 sociologists on various aspects of social inequality and social justice.

Sociocultural Continuity in the Russian Family (an Experiment in Empirical Research)
Shkaratan O. I., Yastrebov G. Russian Education and Society. 2011. Vol. 53. No. 3. P. 3-45.

In an analysis of research data on three generations of Russians, it was found that the impetus prompted by the social and economic transformation in the early 1990s that opened up opportunities for social and professional growth had been practically exhausted by late 2006, and the tendency toward downward social mobility has become more pronounced. This provides evidence that the social structure of today's Russia is "stagnant" and there are no positive shifts in its dynamics.

The concept of social inequality, its nature and forms.

Current empirical sociology features a limited set of indicators for associating individuals with certain social groups (classes or strata). European sociologists rely heavily on such an informative descriptor as occupation, which has become institutionalized and thus produces certain requirements of human, social and cultural resources for individuals to perform the underlying functions. However, this indicator manifests at least two substantial restrictions: first, it is natural that certain types of economic activity are historically less stable than the social classes with which they are associated; and second, Russian history demonstrates that in a developed society the system of occupations is consistent with its institutional set-up and system of values, which are transferred from generation to generation. In Russia specific occupations are associated with a certain character of labour yet not with particular status characteristics that should result from the corporate nature of professional associations. In fact, in that society there exists a unique form of social stratification, in which a hierarchy of social estates dominates elements of true class differentiation.

From an international comparative perspective, this third book in the prestigious ‘eduLIFE Lifelong Learning Series’ provides a thorough investigation into how social inequalities arise during individuals’ secondary schooling careers. Paying particular attention to the role of social origin and prior performance, it focuses on tracking and differentiation in secondary schooling, examining the short- and long-term effects on inequality of opportunities. It looks at ways in which differentiation in secondary education might produce and reproduce social inequalities in educational opportunities and educational attainment.

Models of Secondary Education and Social Inequality brings together a number of cross-national and country studies conducted by well-known experts in the field. In contrast to existing empirical research, this book reconstructs individuals’ educational careers step-by-step, providing a longitudinal perspective essential for an appropriate understanding of the dynamics of inequalities in secondary education. The international viewpoint allows for an illuminating comparison in light of the different models, rules and procedures that regulate admission selection and learning in different countries.

This book will be of great interest to policymakers, researchers and professional experts in the field, including sociologists, pedagogues, international political scientists and economists, and also serves as a major text for postgraduate and postdoctoral courses.

Intergenerational Social Mobility in Soviet and Post-Soviet Russia
Yastrebov G. Sociology. SOC. Высшая школа экономики, 2016. No. 69.
The aim of this paper is to bridge the gaps in existing accounts of the evolution of intergenerational social mobility in Soviet and post-Soviet Russia. The study makes a potentially valuable contribution to the literature by extending the spectrum of institutional and historical contexts, in which (in)equality of opportunity has been considered so far, and a chance to re-examine existing evidence by using alternative datasets and a slightly different methodology. Following the conventions in the social mobility literature in this study I approach social destinations and social origins in terms of educational and occupational attainments of children and their parents respectively. For empirical part I utilize data from four representative cross-national surveys conducted in Russia in 1994, 2002, 2006 and 2013. To study historical change in the patterns of social mobility I identify four cohorts whose educational and occupational careers unfolded during four different historical periods (two for the Soviet and two for the post-Soviet period). Being informed by several earlier studies on post-socialist countries including earlier research on Russia, I anticipated (1) a trend towards lesser (rather than greater) openness in the late years of the Soviet era, (2) a temporary discontinuity of mobility patterns during the turbulent 1990s and (3) the ‘tightening up’ of social mobility regime in the more stable years of Russia’s post-Soviet history. If any such trend existed, my findings would rather suggest that it was directed towards decreasing intergenerational transmission of educational advantage in the post-Soviet era, rather than the other way around. Also, surprisingly and quite contrary to earlier findings and theoretical considerations, the changes in the pattern of occupational mobility remained surprisingly invariant to the changes in historical and institutional context. The paper concludes with highlighting some of the remaining puzzles and possible directions for future research.
Характер стратификации российского общества в сравнительном контексте: от «высоких» теорий к грустной реальности
Ястребов Г. А. Вестник общественного мнения. Данные. Анализ. Дискуссии. 2011. Т. 106. № 4(110). С. 19-31.