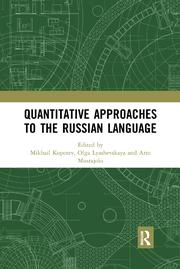 Frequency dictionary of inflectional paradigms: core Russian vocabulary
Lyashevskaya O. Humanities. HUM. Basic Research Programme, 2013
A new kind of frequency dictionary is a valuable reference for researchers and learners of Russian. It shows the grammatical profiles of nouns, adjectives and verbs, namely, the distribution of grammatical forms in the inflectional paradigm. The dictionary is based on data from the Russian National Corpus (RNC) and covers a core vocabulary (5000 most frequently used lexemes). Russian is a morphologically rich language: its noun paradigms harbor two dozen case & number forms and verb paradigms include up to 160 grammatical forms. The dictionary departs from traditional frequency lexicography in several ways: 1) word forms are arranged in paradigms, and their frequencies can be compared and ranked; 2) the dictionary is focused on the grammatical profiles of individual lexemes rather than on overall distribution of grammatical features (e.g. the fact that Future forms are used less frequently than Past forms); 3) grammatical profiles of lexical units can be compared against the mean scores of their lexico-semantic class; 4) in each part of speech or semantic class, lexemes with certain biases in grammatical profile can be easily detected (e.g. verbs used mostly in Imperative, in Past neutral, or nouns used often in plural); 5) the distribution of homonymous word forms and grammatical variants can be followed in time and within certain genres and registers. The dictionary will be a source for research in the field of Russian grammar, paradigm structure, form acquisition, grammatical semantics, as well as variation of grammatical forms. The main challenge for this initiative is the intra-paradigm and inter-paradigm homonymy of word forms in corpus data. Manual disambiguation is accurate but covers ca. 5 million words in the RNC, so the data may be sparse and possibly unreliable. Automatic disambiguation yields slightly worse results, however, a larger corpus shows more reliable data for rare word forms. A user can switch between a ‛basicʼ version which is based on a smaller collection of manually disambiguated texts, and an ‛expandedʼ version which is based on the main corpus, the newspaper corpus, the corpus of poetry and the spoken corpus (320 million words in total). The article addresses some general issues such as establishing the common basis of comparison, a level of granularity of grammatical profile, units of measurement. We suggest certain solutions related to the selection of data, corpus data processing and maintaining the online version of the frequency dictionary.
Russian Learner Translator Corpus
Kutuzov A. B., Kunilovskaya M. In bk.: Text, Speech and Dialogue 17th International Conference, TSD 2014, Brno, Czech Republic, September 8-12, 2014. Proceedings. Springer, 2014. P. 315-323.

О глубинной семантике и функционально-референциальных особенностях адъективных показателей предшествования во французском и русском языках
Набережнова З. Г. Альманах современной науки и образования. 2010. № 12. С. 226-231.
Frequency effects in language representation
Edited by: D. Divjak, S. Gries. Berlin: De Gruyter Mouton, 2012.
The volume explores the relationship between well-studied aspects of language (constructional alternations, lexical contrasts and extensions and multi-word expressions) in a variety of languages (Dutch, English, Russian and Spanish) and their representation in cognition as mediated by frequency counts in both text and experiment. The state-of-the-art data collection (ranging from questionnaires to eye-tracking) and analysis (from simple chi-squared to random effects regression) techniques allow to draw theoretical conclusions from (mis)matches between different types of empirical data. The sister volume focuses on language learning and processing.
Proceedings of the Seventh conference on International Language Resources and Evaluation (LREC'10), Valletta, Malta, 17-23 May 2010
Valletta: ELRA, 2010.
Clitics In The Beserman Dialect Of Udmurt
Arkhangelskiy T. Linguistics. WP BRP. НИУ ВШЭ, 2014. No. 10.
The Beserman dialect of the Udmurt language has a large number of clitics, mainly discourse markers, which have never been described in detail. These clitics occur very frequently in texts and often appear in clusters. The rules which govern the ordering of clitics within a cluster are especially interesting because the binary relation “clitic A normally precedes clitic B in a cluster” proves to be intransitive, thus making it impossible to use a clitic template to describe the ordering. In this paper, the rules which govern placement of individual clitics in a sentence and their mutual order in clusters are described. The research is based on a corpus of approximately 64,000 tokens and the authorʼs own field data collected in the village of Shamardan, Yukamensk region, Udmurtia.
The Pragmatics of Destiny in Russian and English (towards a description of fundamental cultural concepts)
Apresyan V. In bk.: Contrasting Meaning in Languages of the East and West. Iss. XIV. Oxford; Bern; Berlin; Brux.; Frankfurt am Main; NY; Wien: Peter Lang, 2010. P. 477-492.

Spatial Meanings and Russian Prosody: a Corpus Study
Khudyakova M. Linguistics. WP BRP. НИУ ВШЭ, 2014
The objective of this paper is to see if we can find prosodic features that can express spatial meanings on corpus material. The main two questions that we try to answer are: 1. What prosodic instruments express spatial meanings? 2. What characteristics of space are coded by prosody in Russian language? The source of the data is the "Stories about dreams" (which contains 129 stories (24 hours of recorded speech).
II Congreso Internacional "La lengua y literatura rusas en el espacio educativo internacional: estado actual y perspectivas"
Т. II. Мадрид: Rubinos-1860, S.A, 2010.