Cross-regional Variations in the Motivation of Early-Stage Entrepreneurial Activity in Russia: Determining Factors

The chapter deals with the regional differences in the structure of motivation of early entrepreneurial activity (opportunity vs. necessity driven) in Russia and the factors influencing this difference measured by an index called the share of opportunity-based early entrepreneurs (SOBE). It is shown that the differences in SOBE levels among Russian regions are statistically significant; cross-regional differences in the SOBE level reflect a certain set of regional social and economic factors immediately or with a short, medium or even long term (10 years) lag. The empirical part is based on the survey designed by the Higher School of Economics which was conducted in 2011 in 79 regions of Russia with a sample of 56 900 respondents. The survey is representative for the structure of the adult population in each of the surveyed regions. 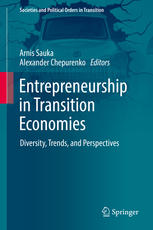 Entrepreneurship in Transition Economies
Edited by: A. Chepurenko. Springer, 2017.
Similar publications
Cross-Regional Variations in the Level of Entrepreneurial Activity in Russia by Type of Motivation: Determining Factors
Chepurenko A., Образцова О., Elahovsky V. Management. MAN. Высшая школа экономики, 2015. No. WP BRP 45/MAN/2015 .
The paper deals with the difference in the share of opportunity-based early entrepreneurs among regions in Russia, which is an important indicator of the ‘quality’ of the entrepreneurial activity. We invent an index called the share of opportunity-based early entrepreneurs (SOBE) which is defined as the number of nascent entrepreneurs and new business owners who are driven by the search for new opportunities and towards the realization of their own values when starting-up and developing their businesses. It is shown that the differences in SOBE levels among Russian regions are statistically significant; cross-regional differences in the SOBE level reflect a certain set of regional social and economic factors right away or with an one-year or two-year lag; they may depend on the tempo of changes in a certain set of factors related to social and economic development in given regions. Among the confirmed hypotheses are the following: a successive growth of private investment in the regional economy as well as a stable increase of real wages of employed population are factors that decrease a region’s SOBE level; moreover, the higher the population’s access to PC and Internet at home, the higher is the related region’s SOBE level. The empirical part is based on the survey designed by the Higher School of Economics which was conducted in 2011 in 79 regions of Russia with a sample of 56 900 respondents. The survey is representative for the structure of the adult population in each of the surveyed regions.
Совершенствование механизма оценки эффективности программ развития экономического блока на региональном уровне
Ожегов Е. М., Полыгалов П. А. Ars Administrandi. 2010. № 3. С. 47-53.
Региональная дифференциация предпринимательской активности населения (по материалам обследования)
Поповская Е. В. Вопросы статистики. 2011. № 12. С. 47-54.
Guns and poseurs: Russia returns to its imperial space.
Архангельская А. А., Dodd N. В кн.: Emerging Powers in Africa. A New Wave in the Relationship?. Palgrave Macmillan, 2016. С. 159-175.
Russia has a consistent record of exceptionalism, evidenced in its approach to Africa, which differs slightly from other ‘traditional’ and ‘new’ players on the continent. Based on Russia’s historical presence in Africa, support for liberation movements and extensive ties to African elites, it may seem that it is Africa’s natural ally. However, given the challenges faced by both parties, interactions between Africa and Russia may be reduced to a series of opportunistic initiatives to maximise economic gains over the short term.
Regional models of the management of knowledge economy development: the problem of measurement and assessment
Tkachenko E., Rogova E., Bodrunov S. In bk.: . P. 881-889.

Anti-Corruption Compliance of Development Assistance Donor Organisations: The Case of Russia
Шенфельдт А. А. International Relations. WP BRP / IR. НИУ ВШЭ, 2016. No. WP BRP 28/IR/2016 .
The article sheds light on the scope of transparency in the Russian Official Development Assistance (ODA) and anti-corruption compliance that has been forged by Russian authorities in the field of international development aid. Analysis of official documents, reports and available statistical sources shows quite poor performance of the Russian Federation, especially with regard to the international standards on open aid data and OECD members’ experience.  First, the article lays out the evolution of transparency and accountability standards in international development assistance and highlights the best practices in forging anti-corruption compliance of leading donor organizations and countries. Though it cannot be said with certainty that the level of corruption globally in development aid has diminished, it is obvious that major OECD donor organizations have improved their integrity and managed to render their aid transparent.  This research has been focused on Russian development assistance. Analysis of published information on Russian ODA such as reports by the Ministry of Finance, web-sites of the Ministry of Finance, Ministry of Foreign Affairs and the Rossotrudnichestvo, Concepts on ODA and other published documents showed that apart from procurement mechanisms, Russian authorities have not still forged anti-corruption compliance of its agencies in the filed of international development assistance. Moreover, Russia does not account for its ODA in a sufficient manner. First, the reports of the entitled authorities published on the official websites do not present precise information on Russian projects in development assistance. Though some information is publicly available, it is rather difficult to access to it as it is dispersed across various sources. Second, the functions on ODA are divided among agencies which makes the accountability process more complex. Third, Russia does not meet international standards outlined by the Busan Partnership on enhancing transparency in development aid: Russia does not report neither to the DAC Creditor Reporting System, nor to Forward Spending Survey, nor to the International Aid Transparency Initiative. Though the failure to publish detailed data stem from the lack of institutional capacity of the system of Russian development aid, still more transparency and accountability should be enhanced to enable civil society and scholars to contribute to the development of Russian aid.  The paper concludes with recommendations to Russian responsible authorities on how to make Russian development assistance transparent.
Экономика развития региона: проблемы, поиски, перспективы
Edited by: Л. А. Аносова, М. М. Амирханов, А. А. Анфиногентова и др. Вып. 13. Волгоград: ВолГУ, 2012.
Стратегические приоритеты социально-экономического развития Республик Северного Кавказа: пути и методы их достижения//Республика Дагестан, Чеченская Республика, Республика Ингушетия, Республика Северная Осетия-Алания, Кабардино-Балкарская Республика, Карачаево-Черкесская Республика, Республика Адыгея
Липина С. А. М.: ЛКИ, 2010.
Роль кластерного подхода в инновационном развитии региона
Липатников В. С., Воробьев В. П. В кн.: Развитие экономики России: инновационное будущее: Научная сессия профессорско-преподавательского состава, научных сотрудников и аспирантов по итогам НИР 2010 года. Март-Апрель 2011 года. СПб.: Издательство СПбГУЭФ, 2011. С. 88-91.
Проблемы развития территориальных образований в условиях ограниченных временных ресурсов
Максимов А. Г., Царьков А. С. Вестник Воронежского государственного университета. 2010. № 2. С. 114-122.

The book is dedicated to the 100th anniversary of Russian parliamentarism. The analysis of historical experience and actual problems of development of parliamentarism in Russia, Germany and a number of other European countries is presented. The authors are leading Russian and foreign experts from a number of research centers in Russia and Europe. Materials on the analysis of the development of parliamentarism in Germany and other European countries are based on the results of the European project "Parliamentary representation in Europe: recruiting and the career of legislators in 1848-2005", implemented during the last decade.

The book is addressed to a wide range of readers - scientists, politicians, public servants, teachers and students, everyone who is interested in the history and modern experience of Russian and European parliamentarism.