On Overfitting of Classifiers Making a Lattice

P. 184-197.
Makhalova T., Kuznetsov S.
Language: English
Text on another site
Keywords: probability of overfittingFCA (Formal Concept Analysis)
Publication based on the results of: Explanation-oriented Methods of  Data Analysis for Semantically Rich Data and Their Applications(2017) 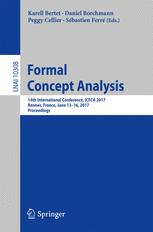 Formal Concept Analysis (FCA) is a mathematically well-founded theory aimed at data analysis and classication, introduced and detailed in the book of Bernhard Ganter and Rudolf Wille, \Formal Concept Analysis", Springer 1999. The area came into being in the early 1980s and has since then spawned over 10000 scientic publications and a variety of practically deployed tools. FCA allows one to build from a data table with objects in rows and attributes in columns a taxonomic data structure called concept lattice, which can be used for many purposes, especially for Knowledge Discovery and Information Retrieval. The \Formal Concept Analysis Meets Information Retrieval" (FCAIR) workshop collocated with the 35th European Conference on Information Retrieval (ECIR 2013) was intended, on the one hand, to attract researchers from FCA community to a broad discussion of FCA-based research on information retrieval, and, on the other hand, to promote ideas, models, and methods of FCA in the community of Information Retrieval. This volume contains 11 contributions to FCAIR workshop (including 3 abstracts for invited talks and tutorial) held in Moscow, on March 24, 2013. All submissions were assessed by at least two reviewers from the program committee of the workshop to which we express our gratitude. We would also like to thank the co-organizers and sponsors of the FCAIR workshop: Russian Foundation for Basic Research, National Research University Higher School of Economics, and Yandex.

Symbolic classifiers allow for solving classification task and provide the reason for the classifier decision. Such classifiers were studied by a large number of researchers and known under a number of names including tests, JSM-hypotheses, version spaces, emerging patterns, proper predictors of a target class, representative sets etc. Here we consider such classifiers with restriction on counter-examples and discuss them in terms of pattern structures. We show how such classifiers are related. In particular, we discuss the equivalence between good maximally redundant tests and minimal JSM-hyposethes and between minimal representations of version spaces and good irredundant tests.

There is a lot of usefulness measures of patterns in data mining. This paper is focused on the measures used in Formal Concept Analysis (FCA). In particular, concept stability is a popular relevancy measure in FCA. Experimental results of this paper show that high stability of a pattern in a given dataset derived from the general population suggests that the stability of that pattern is high in another dataset derived from the same population. At the second part of the paper, a new estimate of stability is introduced and studied. It es performance is evaluated experimentally. And it is shown that it is more efficient.

This paper considers a data analysis system for collaborative platforms which was developed by the joint research team of the National Research University Higher School of Economics and the Witology company. Our focus is on describing the methodology and results of the first experiments. The developed system is based on several modern models and methods for analysing of object-attribute and unstructured data (texts) such as Formal Concept Analysis, multimodal clustering, association rule mining, and keyword and collocation extraction from texts.

During the last three decades, formal concept analysis (FCA) became a well-known formalism in data analysis and knowledge discovery because of its usefulness in important domains of knowledge discovery in databases (KDD) such as ontology engineering, association rule mining, machine learning, as well as relation to other established theories for representing knowledge processing, like description logics, conceptual graphs, and rough sets. In early days, FCA was sometimes misconceived as a static crisp hardly scalable formalism for binary data tables. In this paper, we will try to show that FCA actually provides support for processing large dynamical complex (may be uncertain) data augmented with additional knowledge.