This paper presents the opportunities, advantages and limitations of e-participation portals automated monitoring system (AMS) in social and political research. The system was initially developed in 2013 to analyse petitioning and voting dynamics of the Russian e-petitions portal – the Russian Public Initiative – and then was further expanded. In the paper the architecture and working principles of the system are described. It is argued and exemplified that the data collected automatically from e-petition portals can be used to advance research in several areas: media and PR effects on political participation, issue salience, as well as factors of voting behavior and online political engagement. 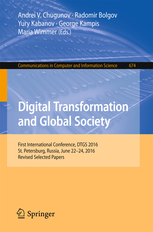 This book constitutes the proceedings of the 10th IFIP WG 8.5 International Conference on Electronic Participation, ePart 2018, held in Krems, Austria, in September 2018.

The 12 revised full papers presented in this book were carefully reviewed and selected from 29 submissions. The papers are clustered under the following topical sections: general e-democracy and e-participation; digital collaboration and social media; policy modeling and policy informatics; and social innovation.

In this article various papers presented on the IV International conference on online-deliberation which took place at the University of Leeds (UK) in 2010 and was dedicated to the search of the proper answers to all social and technological challenges to this relatively new scientific field are reviewed. To begin with the author gives a brief history of theoretical premises which caused the interest to this agenda in contemporary political science. The main scientific trends are examined on the concrete research examples. In the conclusion the further outlooks of the researches in the field of political online-deliberation, including those in our country, are discussed.

The paper presents the results of research on factors explaining the level of e-petitioning in Russian regions. The main goal is to reveal socio-economic, technological and institutional problems the regions face, and hence to embed the Russian case into the broad research agenda on online engagement. We concentrate on the federal e-petitions portal – Russian Public Initiative – and use the automated monitoring system to analyse subnational dynamics of online petitions submissions and voting on the aggregate level. The data are used to quantitatively assess the drivers and obstacles for e-participation. Our findings suggest that more active e-petition portal usage in regions is associated with higher socio-economic and technological development, as well as with democratic institutions and better e-government policy. One of the main obstacles to active use of the portal is its institutional design that at the moment provides regions with different opportunities and reinforces participation divides. Future steps, implications for automated monitoring system and some policy recommendations are also discussed.

The 10th International Conference on Theory and Practice of Electronic Governance (ICEGOV2017) took place in New Delhi, India, between 7 and 9 March 2017. The conference was held under the high patronage of the Ministry of Electronics and Information Technology (MeitY), Government of India, and it was co-organized by Digital India: National e-Governance Division (NeGD), part of MeitY, and the United Nations University Operating Unit on Policy-Driven Electronic Governance (UNU-EGOV), the latter also serving as the ICEGOV coordinator. The United Nations Educational, Scientific and Cultural Organization (UNESCO) acted as a collaborator.