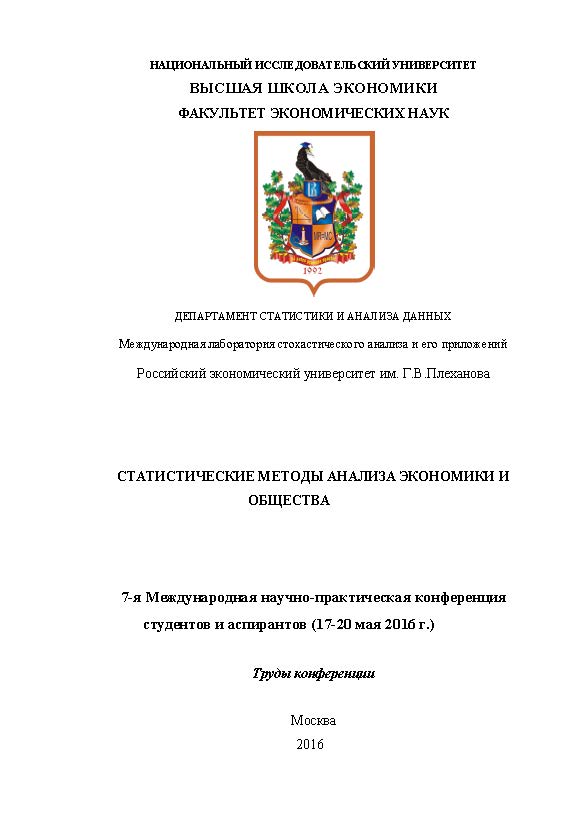 Effects of Hostility Tradition in Antitrust: Leniency Programs and Cooperation Agreements
Павлова Н. С., Shastitko A. Economics/EC. WP BRP. Высшая школа экономики, 2014. No. 58/EC/2014.
The article focuses on the effects that type I errors can have on the incentives of firms to compete, collude or engage in efficiency promoting socially beneficial cooperation. Our results confirm that in the presence of type I errors the introduction of a leniency program can have ambiguous effects, including the destruction and prevention of welfare enhancing horizontal cooperation agreements. The obtained results help understand the negative impact the hostility tradition resulting in type I enforcement errors can have on social welfare when applied to the regulation of horizontal agreements.
The Economics of Beer
Edited by: J. F. Swinnen. Oxford: Oxford University Press, 2011.

Beer was the drink of choice in many ancient societies and throughout the past centuries in large parts of the world. Right now, it is globally by far the most important alcoholic drink, in volume and value terms. The largest brewing companies have developed into global multinationals. The beer market is characterized by strong growth in emerging economies, by a substantial decline of (per capita) beer consumption in traditional markets, and a shift to new products. There has been a strong interaction between governments (politics) and markets (economics) in the beer industry. For centuries, taxes on beer or its raw materials were a major source of tax revenue for governments. Governments have also regulated the beer industry for reasons related to quality, health, and competition. The beer market is not only an interesting sector to study in itself but also yields important general economic insights. This book is the first economic analysis of the beer market and brewing industry. It comprises a comprehensive and unique set of economic research and analysis on the economics of beer and brewing. The various chapters cover economic history and development, demand and supply, trade and investment, geography and scale economies, technology and innovation, health and nutrition, quantity and quality, industrial organization and competition, taxation and regulation, and regional beer market developments.

The Effects Of Competition Policy: Merger Approval, Entry Barrier Removal, Antitrust Enforcement Compared
Avdasheva S. B., Korneeva D. V. Financial Economics. FE. Высшая школа экономики, 2014. No. WP BRP 34/FE/2014.
There is little evidence on the comparative effectiveness of different competition policy measures, especially in transition economies. This research represents the effort to expand the financial event study method for the assessment of different competition policy measures: merger control, antitrust investigations on abuse of dominance, and changes of import tariffs in the Russian ferrous and non-ferrous metals markets from 2007 to 2012. According to the reaction of financial market, mergers between Russian metal producers restrict competition and reduce consumer welfare. Antitrust investigations have a positive effect on stock prices of buyers of metal and no significant impact on the market valuation of target of investigation. Changes in import tariffs have a positive significant impact on the company stock prices. The sign of each effect allows the comparison of different measures of competition policy.
Competition Policy for the New Era
Edited by: E. Fox, B. Tembinkosi, L. Mncube. NY: Oxford University Press, 2017.

Competition law has expanded to more than 100 jurisdictions worldwide with varying degrees of economic, social, and institutional development, raising important questions as to what is the appropriate design of competition law regimes and the interaction between competition law and economic development. This volume, comprising a selection of papers from the 4th BRICS International Competition Conference written by academic and practising economists and lawyers from both developed and developing countries, is distinctive in its focus on a broader view of competition policy in BRICS and developing countries. It examines the role competition, the application of broader public interest and national interest concerns in the analysis and influence on developing country competition authorities' policy-making. The contributors address topics such as: - a broad view of competition policy; - making markets work for the people as a post millennium development goal; - some key issues concerning the further development of China's antimonopoly law; - remedies in BRICS countries; - public interest issues in cross-border mergers; - crafting creative remedies in food markets in South Africa; - what are African competition authorities doing to fight cartels?; - successes and challenges in the fight against cartels; and the economics of antitrust sanctioning.

Dr. Frédéric Jenny is the Renaissance man of competition policy. As an economist, scholar, judge and enforcer, he has helped transform the landscape of global competition enforcement. In the first volume of this Liber Amicorum, distinguished members of both Bar and Bench, as well as academics from around the world, come together to bear testimony to his international achievements. This collection of 21 articles celebrates Dr. Jenny’s career thus far, and also explores other timely and topical areas of competition law and policy.