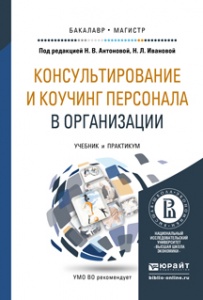 КОНСУЛЬТИРОВАНИЕ И КОУЧИНГ ПЕРСОНАЛА В ОРГАНИЗАЦИИ. Учебник и практикум для бакалавриата и магистратуры
М.: Юрайт, 2015.
Similar publications
За пределами «драматического треуольника»: Овладевающее Я (на английском языке)
Shmelev I. Psychology. Journal of the Higher School of Economics. 2015. Vol. 12. No. 2. P. 133-149.
The article offers a comprehensive framework for analyzing and diagnosing the roles played in the Karpman drama triangle by using analysis of the states, behaviors, secondary gains, payoffs and marker words. The framework considers and describes specific instruments to step out of the script and possibilities of using those instruments in counseling. The author substantiates the potential of Overcoming Self, which is a particular formation within the Adult Ego-state that leads the subject towards an autonomous, realistic and responsible attitude to life and over - coming difficult life situations. The article demonstrates that in the process of communication all three roles are simultaneously played: while one of the roles is on stage, the other two thereafter; the main role gives way to one of the background roles. The foundation of the author’s models of entering and exiting dependent relationships is Berne's theory of Transactional Analysis and V. Petrovskiy's multisubject approach. Both those theories help to demonstrate that one of the most important objectives for the counseling therapist is to reinforce and strengthen the client’s Self through the client’s undertaking of responsibility, for himself in the first place and thereafter for the lives of others (family, business and those surrounding him). The research demonstrates that in order to break the Gordian knot of the drama triangle, the counseling therapist needs to create such an environment, in which the client can reveal the inanity of script patterns and move from being dependent to forming, maintaining and relying on one’s own self as an integral subject through strengthening of the Overcoming Self. Choosing a responsible attitude, the client takes over her behavior and gets the opportunity to see herself as the author of her life events.
Развитие идей Л.И. Анцыферовой о методологии практической психологии личности
Нартова-Бочавер С. К. Психологический журнал. 2014. Т. 35. № 6. С. 35-45.

The connection of L.I. Antsyferova’s ideas of the personal development and counseling psychology is traced. The main principles of applied personality psychology are described (system, determinism, development, and complementarity). Synergetic and compensatory interaction between the person and situation is considered. Everyday life psychology as a theoretical base of counseling is analyzed. The interrelation of counseling and natural psychotherapy is discussed. Deficient and self-actualization models of psychotherapy are identified. The empirical data about natural techniques of client’s self-help in cases of deficient and self-actualization complaints are shown. It is concluded that everyday life is a significant resource of personal development.

In the article it is discussed the features of palliative care, particularly the care for the incurable patients in a hospice. It is described the changes in the philosophy of the humanitarian sphere and the emergence of a new human right - the right to a dignified death. Special attention is given to the work of psychologist in palliative care and specificity of training of specialist in the field of socio-medical care for incurable patients. It is said about psychological phenomena that occur in the work of psychologist at the hospice, as well as the techniques and methods of consulting of patients. It is discussed the personality of consulting psychologist.