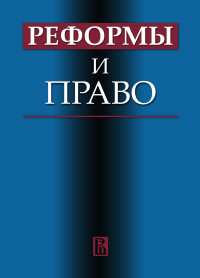 The authors examine the effectiveness of the legislative activities of environmentalists and the parliament in the sector “Natural resources and protection of environment”. The major environmental legislative initiatives are considered in the study (“On Responsible Treatment of Animals and on Amendments to Certain Legislative Acts of the Russian Federation”, “On Banning the Quality Control of Perfumes, Cosmetics and their Ingredients on Animals”, “On Setting of Quotas for Emissions of Pollutants and Amending Certain Legislative Acts of the Russian Federation on Reducing Air Pollution” and a municipal solid waste management problem (“garbage” problem).

The project of the state reforms of M.M. Speransky (1808-1809) is considered in a context of attempts of Alexander I to solve one of the major problems of Russia XIX century - the problem of reforming a state system and management. It is proved that Speransky's various works contain fragments of harmonious sociopolitical philosophy, rather modern and actual.