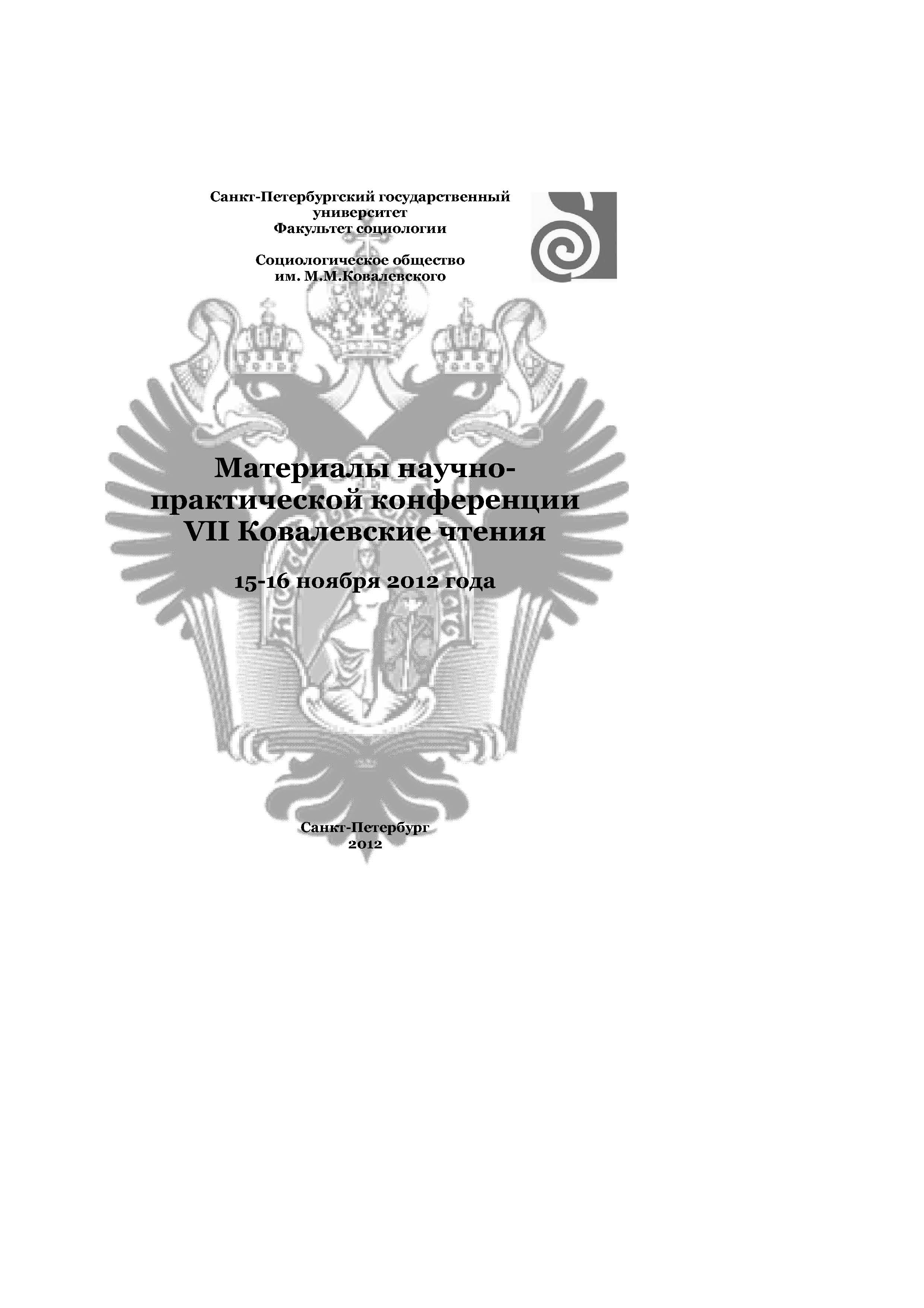 Consumer Cooperatives and Liberal Idea In Russia
Menyashev R. Economics. EC. Высшая школа экономики, 2011. No. 05.
A popular view in Russian studies argues that underdevelopment of Russian civil society is partly responsible for the failure of liberal idea in Russia. The fragmented society may see no alternative to massive government regulation, which is why support for a strong state is so high. If this logic is true, the dierences in civicness across urban societies should show up in dierent levels of liberal parties' support. The paper estimates this eect. It was found that the transition from the most passive urban society to the most active in the sample increases the vote for liberal parties by a third. A unit increase in the number of consumer cooperatives per 1000 of citizens leads to a 3.5% drop in Communist Party results in 1995 and a 4% drop in United Russia votes in 2007. To demonstrate the causality we instrument the development of civil society by the number of years since the foundation of the rst university in each city.
Does Social Capital Have Economic Payoff in Russia?
Menyashev R., Polishchuk L. Научные доклады Института институциональных исследований. WP10. Высшая школа экономики, 2011. No. 01.
In a number of studies social capital is shown to have substantial positive impact on economic development, institutional performance, and quality of governance. So far no such analyses were available for Russia, and the present paper is intended to fill this gap. We propose a model which differentiates the impact on economic welfare of bridging and bonding forms of social capital. The empirical part of the study is based on 2007 survey data collected in the Geo-Rating project. We establish significant positive relationship between bridging social capital and urban development in Russia. Bonding social capital works in the opposite direction: its impact on development is negative. It is further shown that the transmission mechanism between social capital and economic outcomes is based on municipal governance: bridging social capital improves government accountability, whereas bonding social capital reduces the political costs of malfeasance and thus facilitates the abuse of power.
Is individual social capital linked to the implementation of entrepreneurial intentions?
Tatarko A. Basic research program. WP BRP. National Research University Higher School of Economics, 2013. No. 25.
The present study reveals the role of individual social capital in the implementation of a person’s intention to start their own business and reveals how individual social capital contributes to this action. The basic premise of our study is that individual social capital facilitates people’s implementation intention to start their own business. The sample consists of a group of respondents (N=269) who intended to start their own business (intenders) and another group (non-intenders) who did not intend to (N=270). We combined the reasoned action approach (Fishbein & Aizen, 2010) with the individual social capital approach (Van Der Gaag & Snijders, 2004) to study intention and implementation. The study showed that the intenders had more resources provided by formal (organizations and associations) and informal networks and relationships. These resources had a direct and indirect impact (through the perceived behavioral control) on their intention to start their own business. We concluded, that individual social capital can facilitate the implementation of entrepreneurial intention. A year later, we performed panel research and carried out another study by re-interviewing respondents who had expressed their intention to start their own business in the next 2 years. It was found that respondents who opened a business only a year later had higher social capital than those who did not. To explain the psychological mechanism underling the relation between intention and implementation, we use the term “the buffering effect of social support”, which means that people who feel potential support are less susceptible to stressful situations and circumstances than people who do not feel potential support. Key words: individual social capital, entrepreneurial intention, theory of planned behavior, the buffering effect of social support, perceived behavioral control. JEL Classification: Z13.
Оппортунизм и доверие на рынках удаленной работы
Стребков Д. О., Шевчук А. В. В кн.: Рынки удаленной работы: социальные сети и институты. Вып. 10. М.: Издательский дом НИУ ВШЭ, 2012. С. 76-94.
Социальный капитал и экономические установки жителей Москвы и Башкортостана
Павленко О. Б. В кн.: Теоретические проблемы этнической и кросс-культурной психологии: материалы Третьей международной научной конференции 24-25 мая 2012 г. Том 1. Т. 1: Проблемы методологии этнической и кросс-культурной психологии. Смоленск: Маджента, 2012. С. 175-178.

The book’s stated objective is to uncover context, “how social capital interacts with social institutions.” It is part of a new wave of research on social capital that, dissatisfied with both macro analyses limited to societal patterns and micro analyses limited to actors’ conditions, seeks to understand the operation of networks at the meso-level: how institutions and organizations structure the transfer of resources across networks. It purports to make both theoretical and methodological contributions, the first by developing the concept of “institutional logics,” the latter by “casting diverse contextual settings as ‘generators’ of social relations”, and studying these contexts from multiple methodological perspectives. (from a review by M. Small)

The concepts of social networks, social capital and trust play an increasingly central role in the social sciences. They have become indispensable conceptual tools for the analysis of post-industrial/late-modern societies, which are characterized by such features as the relative decline of formal hierarchies, the development of flexible social arrangements in the sphere of production and the extreme mobility of capital. This is the first book to study the interrelationships between these important concepts both theoretically and empirically. Drawing on empirical investigations from a range of diverse European social contexts, the contributors develop an economic sociology that builds on and extends established theoretical perspectives. The book opens with an introduction to the theoretical ideas: relating social capital to reciprocity, trust and social networks in line with current debates. The authors go on to discuss the concept of social embededdness, addressing the economic effects of social capital by examining the network and trust foundations of labour markets and investigating the structural limits of trusting networks. They conclude with an exploration of the impact of networking and the functioning of trust and social capital on the economic arrangements and performance of nascent capitalist economies in post-Communist Europe. This thematically unified collection by a team of distinguished contributors from across Europe provides an innovative and distinctive contribution to an expanding area of research.