Russia: geopolitics from the heartland 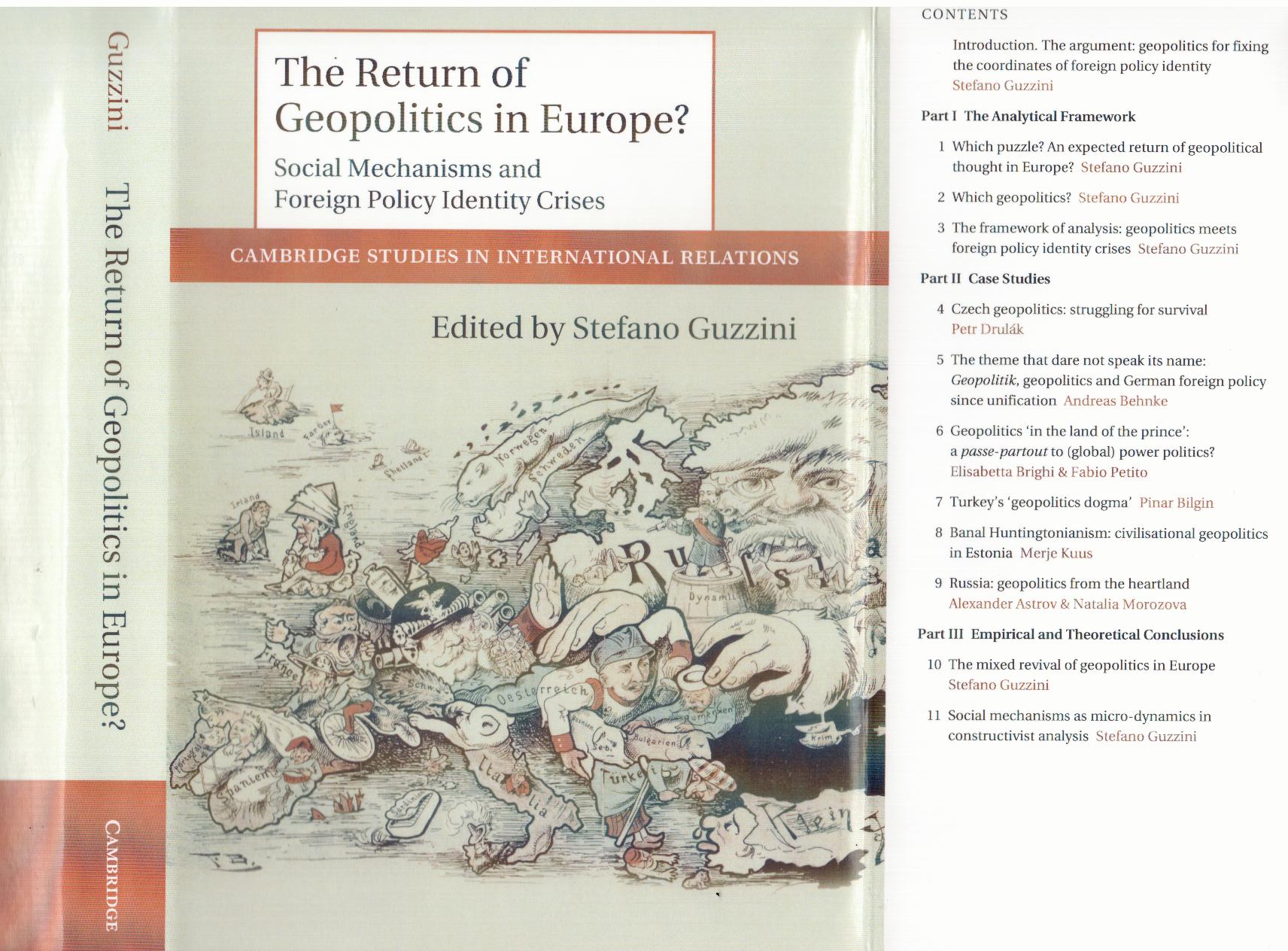 The Return of Geopolitics in Europe? Social Mechanisms and Foreign Policy Identity Crises
Edited by: S. Guzzini. Cambridge: Cambridge University Press, 2012.
Similar publications
От революции к Реставрации: олигархические тенденции постсоветских политических режимов
Медушевский А. Н. Сравнительное конституционное обозрение. 2010. № 4(77). С. 155-178.
Eurasianism Then and Now: A Russian Conservative Movement and Its Ukrainian Challenge
Beisswenger M. In bk.: Ukraine, the EU and Russia: History, Culture and International Relations. Houndmills: Palgrave Macmillan, 2007. P. 27-51.
RUSSIAN FOREIGN POLICY AND ITS HUMANITARIAN CONSEQUENCES
Rubio Teres P. L. CESEDEN. CESEDEN. Spanish Ministry of Defense, School of High Defence Studies (EALEDE), 2014
This thesis aims to demonstrate the power of a country like Russia, whose government has reestablished the imperialist vision of the past. Its propaganda apparatus capable of controlling the public opinion together with the willingness of the government to use military means to defend its interests, provides the Federation with an undeniable power. An essential fact, nevertheless, that may induce other countries to make mistakes even against their own population. Initially, the research focuses on knowing the mindset of Russian society and the media exert control over it. Next, deciphering the guidelines of its foreign policy and configuration of the world based on their relationships with strategically important territories and the organizations leaded by the Federation. Finally, revealing the causes that led to the conflict in Ukraine as well as the methods used during the fighting by both parties to the conflict. The issue of Russia is of great relevance nowadays due to the annexation of Crimea and the clashes occurred after the revolution in the Maidan. However the consequences of the policy of "fait accompli" carried out by the Kremlin should not be regarded as a timely matter, but in the medium term. Therefore, keeping track of the Ukrainian crisis may help preventing similar situations and separatist movements in the upcoming future in other areas of Russia's geopolitical influence.
Понятие права в трудах классиков евразийства
Назмутдинов Б. В. История государства и права. 2012. № 24. С. 9-14.

The author considers new tendencies in national languages development during globalization epoch, reveals the connection between socio-cultural and socio-linguistic changes and swift distribution of modern information technologies and pays special attention to the necessity of taking measures on languages protection from the destructive factors accompanying globalization process with the purpose of language variety preservation in the world and guaranteeing nations cultural traditions continuity.

The Political Role of the Russian Consulates in Mongolia in the Mongolian National Liberation Movement in the Early 20th Century
Sizova A. Basic research program. WP BRP. National Research University Higher School of Economics, 2016. No. 119.
This article examines the objectives, specific features and the results of the political and diplomatic work of the Russian consulates in Outer Mongolia during the rise of the Mongolian national liberation movement in the 1900-1910s. The article is based on a wide range of sources, including archives, in Russian, English, Chinese and Mongolian. In the period after the Xinhai revolution,  Russian  representatives  were  actively  involved  in  the  settlement  of  the  political disputes  between  China  and  Mongolia  which  sought  independence  from  the  former  and facilitated the achieving the autonomous status by Mongolia. The Russian diplomats participated in the elaboration and implementation of important international agreements, organization of the technical and financial help to the Mongolian government and prevention of the spread of the Pan-Mongolist movement. Therefore, at the beginning of the 20th  century, the Russian consulates not  only  served  as  powerful  protectors  of  Russia’s  strategic  interests  in  Mongolia,  but  also played a significant regulating role in the political processes in  this country. Above that, they were important for maintaining the Russian Empire’s political contacts with China and Mongolia and the political status quo in the regional system of international relations.
Eurasianism: Affirming the Person in the ‘Era of Faith’
Beisswenger M. In bk.: A History of Russian Philosophy, 1830-1930: Faith, Reason and the Defense of Human Dignity. Cambridge: Cambridge University Press, 2010. P. 363-380.
Russia 2025: Scenarios for the Future
Petrov N., Makarenko B., Denisenko M. B. et al. L.: Palgrave Macmillan, 2013.