Proceedings of the International Workshop CS&P'2013

This volume contains the Proceedings of 22nd Concurrency, Specification and Programming (GS&P) Workshop held on September 25-27, 2013 in Warsaw. There were 48 submissions. Each submission was reviewed by two program committee members. The committee decided to accept 40 papers. The Workshop was initiated in the mid 1970s by computer scientists and mathematicians from Warsaw and Humboldt Universities, as Polish-German annual meetings. They were suspended for some years in the 1980s and reactimed in 1992. Thereafter, the Workshop, organised alternatingly by the Institutes of Informatics and Mathematics of the University of Warsaw and the Institute of Informatics of Humboldt University in Berlin on the basis of an exchange program, has been given the name GS&P. It should be mentioned that the CS&P meetings, initially purely bilateral, since 1992 have developed into events attended by participants from a number of different countries beside Poland and Germany. The present GS&P'13 meeting attracted contributors from: Canada, Egypt, France, Germany, Italy, Nepal, The Netherlands, Poland, Russia, Serbia, Slenakia, Sweden, Turkey, United Kingdom, United States, and Vietnam. The organisation of this year's CS&P would not be possible without the resources and financing provided by seven institutions. We would like to thank the Faculty of Mathematics, Informatics and Mechanics of the University of Warsaw and the Institute of Informatics of the Humboldt University of Berlin for the continuing financial and organisational support provided to GS&P over last twenty-two years. The essential financial backing received from the Warsaw Center of Mathematics and Computer Science made the organisation of CS&P 2013 possible. Our thanks go to the Bialystok University of Technology for providing the means for publishing this proceedings volume. Last, but not the least, we are grateful for the significant financial support provided by the Vistula University in Warsaw.

Chapters
Discovery of Cancellation Regions within Process Mining Techniques
, in: Proceedings of the International Workshop CS&P'2013. Vol. 1032.: Bialystok: Bialystok University of Technology, 2013.. P. 232-244.
Process mining is a relatively new field of computer science which deals with process discovery and analysis based on event logs. In this work we consider the problem of discovering workflow nets with cancellation regions from event logs. Cancellations occur in the majority of real-life event logs. In spite of huge amount of process mining ...
Research target: Mathematics Computer Science
Priority areas: IT and mathematics
Language: English
Text on another site
Keywords: concurrencyformal specificationssemantic and structural concurrency 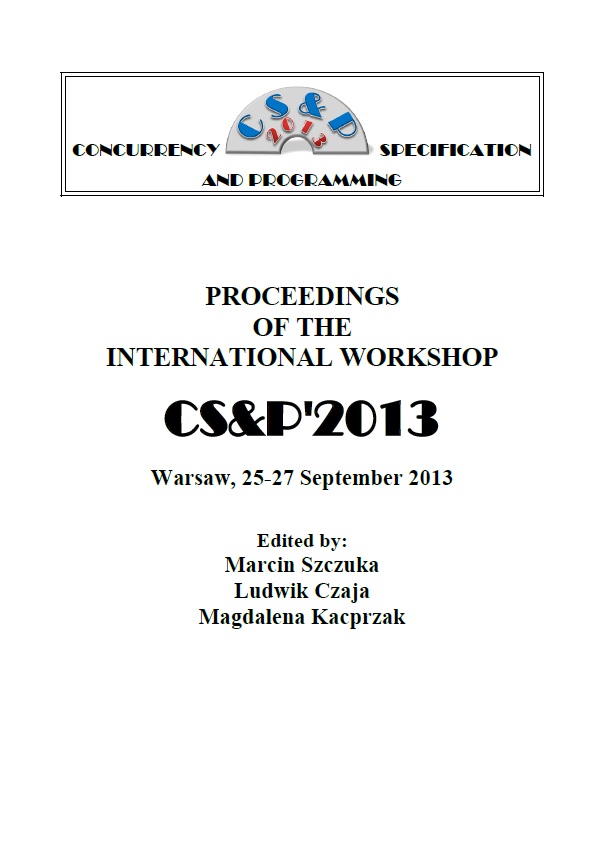