In the information society the current system of copyright law originated in the days of the industrial printing came to the end of its life cycle. Regulation of relations around the intangible results of creative activity can no longer be based on the analogy of the relationship around material goods. This book is dedicated to the study of legal and informational nature of copyright and related rights. Based on results of the study the conclusions are made on the new system of legal regulation of author’s rights in the modern informational realities. 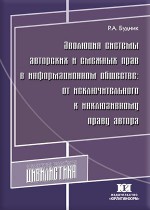 The monograph is devoted to new concept the inclusive author’s right. Empirical knowledge about discrepancy of copyright law with relations of modern informational society is supported by analysis of doctrinal issues of intellectual property. We justify that exclusive method have to be added by inclusive method in the author’s rights legislations. We provide new provisions of law as well as economic principles for the updated copyright system taking into account new interests and relations of authors and other market participants in the age of Internet.

The book is intended for specialists in the area of ​​reforming the law on intellectual rights, graduate students and students of copyright.

The Legitimacy of the Bolshevik Order, 1917-1918: Language Usage in Revolutionary Russian Law
Borisova T. Y. Law. LAW. Высшая школа экономики, 2012. No. 05.
The article describes and analyzes the legislative politics of revolutionary regimes in Russia in 1917-1918. The author aims to demonstrate the political meaning of the form of early Soviet legislation and its legitimizing effect. The revolutionary legislators often used specific language in the new laws as a vehicle of legitimacy, i.e. to make the people comply. The two main types of legal language used by the Bolsheviks can be interpreted from the perspective of different types of legitimacy. The revolutionary strategy used propagandistic legislation, written in the language of lay people, which urged them to act according to the new law. It can be seen as a request for acts of the people to legitimize the soviets. On the contrary, the traditional strategy employed old bureaucratic means of writing and distributing legislation to the local soviets. The language used by this strategy was closed to the understanding of a lay audience and implied traditions of obeying the law written in familiar legal language, which in turn implied rational/legal legitimacy. The second strategy had already become dominant after the first months of the Bolshevik revolution. This observation demonstrates that from the very beginning of their rule, Soviet leaders approached legislative policy from a technocratic point of view, which determined the further development of Soviet legal theory and practice.
Intellectual Property rights and their discontents
Mylonas Y. In bk.: A joy forever: the political economy of social creativity. Vol. 4. Warsz.: University of Warsaw, 2012. P. 171-190.

This monograph is devoted to the description of the civil concept of the author's inclusive right. Inclusive right is guaranteed to the author or other rightholder through the construction and implementation of an inclusive mechanism of civil law regulation of copyright relations. The development of this concept is conditioned by the need to modernize the institution of copyright due to changes in the relationship to create and use works of science, literature and art in the information society. The problems of the current copyright system and the prerequisites for its modernization are investigated. Legislative initiatives aimed at forming a corpus of inclusive legal norms in the Civil Code of the Russian Federation and international copyright treaties have been formulated. A legal algorithm for constructing an inclusive mechanism for civil-law regulation of copyright relations in Russia and at the international level has been developed. The publication is intended for specialists in the management of intellectual rights and a wide range of readers.

This monograph is devoted to the description of the civil concept of the author's inclusive right. Inclusive right is guaranteed to the author or other rightholder through the construction and implementation of an inclusive mechanism of civil law regulation of copyright relations. The development of this concept is conditioned by the need to modernize the institution of copyright due to changes in the relationship to create and use works of science, literature and art in the information society. The problems of the current copyright system and the prerequisites for its modernization are investigated.

In article of E.P.Gavrilov, professor of rte chair of civil law of the National research university of the Higher economy school, doctor of law (Moscow, sirill@mail.ru) is considered the question on example of Cheburashka: who is the author of the character? It is found out that the literary character, art character and cinema image can have different authors and owners.

The chapter explores the difficult search for legitimacy in using unlicensed media content by the Russian social network, VKontakte, and other Russian Internet companies. Russia’s economy and society went through several stages, from complete negligence of intellectual rights to step-by-step shaping of new compromise principles to make consumers to pay at least something and to persuade right holder to accept at least something for music. For a better understanding of the cultural background of this story, we look back to the evolution of Russian intellectual property rights and observe similar “legitimacy of the illegal” phenomenon during several stages of its development. Two important generalizations are: (1) when deciding to act illegally, the actor wants to maximize the happiness of its most important stakeholders, and (2) the decision to change the business model and search for new legitimacy almost never comes from moral arguments, but is always made under external pressure.