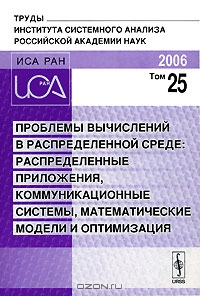 Similar publications
Сабейские этюды
Коротаев А. В. М.: Восточная литература, 1997.
Моделирование и обеспечение надёжности технических систем
Кофанов Ю. Н. М.: Энергоатомиздат, 2011.
A Modification of Dynamic Programming Algorithms to Reduce the Running Time or/and Complexity
Gafarov E., Lazarev A. A., Werner F. Otto-von-Guericke Universitaet, 2010. No. 20.
In this paper, we present a modification of dynamic programming algorithms (DPA), which we denote as graphical algorithms (GrA). For the knapsack problem and some single machine scheduling problems, it is shown that the time complexity of the GrA is less that the time complexity of the standard DPA. Moreover, the average running time of the GrA is often essentially smaller. A GrA can also solve largescale instances and instances, where the parameters are not integer. In addition, for some problems, GrA has a polynomial time complexity in contrast to a pseudo-polynomial complexity of DPA.
Применение компьютерной системы SPLEN(Rolling) при решении задач многовариантного анализа калибровочных схем
Чумаченко Е. Н., Аксенов С. А. Вестник машиностроения, СТИН. 2011. № 7. С. 21-26.
Dynamics of Information Systems: Mathematical Foundations
Iss. 20. NY: Springer, 2012.

A Polynomial Time Graphical Algorithm for Maximizing Total Tardiness on a Single Machine
Gafarov E., Lazarev A. A., Werner F. Otto-von-Guericke Universitaet, 2010. No. 12.
In this paper, we consider the problem of maximizing total tardiness on a single machine, where the first job starts at time zero and idle times between the processing of jobs are not allowed. We present a modification of an exact pseudo-polynomial algorithm based on a graphical approach, which has a polynomial running time.
Resource Co-allocation Algorithms for Job Batch Scheduling in Dependable Distributed Computing
Toporkov V. V., Toporkova A. S., Yemelyanov D. M. et al. In bk.: Dependable Computer Systems. Vol. 97. Berlin; Heidelberg: Springer, 2011. P. 243-256.