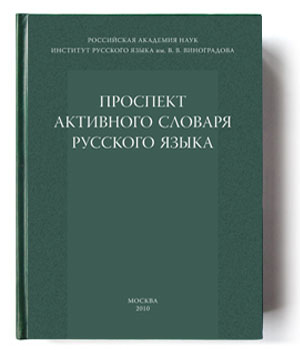 Similar publications
The verbless subjunctive in Russian
Dobrushina N. Humanities. HUM. Basic Research Programme, 2013. No. 32/HUM/2013.
The Russian subjunctive particle by can be used in constructions that lack any finite verb form, including constructions involving infinitives, predicative adverbs or adjectives, and nouns. The properties of these constructions are compared, and a conclusion is made that verbless subjunctives share a common semantic component, namely a wish or necessity. A survey of the development of subjunctive verbless constructions with predicative adverbs and adjectives shows that the evolution of the optative meaning took place during the last two centuries.
Понятие «банкротство» в координатах правовой лингвистики: русско-англо-французские аппроксимации
Власенко С. В., Галимов А. Р. Вестник Тверского государственного университета. Серия: Филология. 2012. Т. 10. № 2. С. 21-28.

Pre-experiments on Annotation of Russian Coreference Corpus
Toldova S., Azerkovich I., Гришина Ю. et al. Linguistics. WP BRP. НИУ ВШЭ, 2015
Building benchmark corpora in the domain of coreference and anaphora resolution is an important task for developing and evaluating NLP systems and models. Our study is aimed at assessing the feasibility of enhancing corpora with information about coreference relations. The annotation procedure includes identification of text segments that are subjects to annotation (markables), marking their syntactic heads and identifying coreferential links. Markables are classified according to their morphological, syntactic and reference structure. The annotation is performed manually, providing gold standard data for high-level NLP tasks such as anaphora and coreference resolution. The paper reports on inconsistencies in selecting NPs of various types as markables and their borders, and in ways of constructing anaphoric pairs. We consider the types of NPs missed by one of annotators and discourse and semantic factors that may have affected annotator's judgements.
Subjunctive complement clauses in Russian
Dobrushina N. Russian linguistics. 2012. Vol. 36. No. 2. P. 121-156.