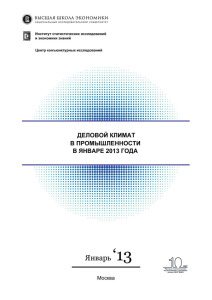 Индекс экономического настроения (Индекс ВШЭ) в IV квартале 2012 г.
Остапкович Г. В., Липкинд Т. М., Китрар Л. А. М.: Издательский дом НИУ ВШЭ, 2012.
Нестандартные трудовые договора: опыт использования предприятиями
Смирных Л. И. Научные труды Лаборатории исследований рынка труда. WP15. НИУ ВШЭ, 2010. № 03.
Наем или переобучение: опыт российских предприятий
Лазарева О. В., Денисова И. А., Цухло С. В. Проблемы рынка труда. WP3. Высшая школа экономики, 2006. № 11.
Results of an empirical research on the volume and forms of retraining at Russian enterprises are presented in the paper. The study is based on the survey of about a thousand of managers of industrial enterprises carried out by IET. The analysis demonstrates that the majority of industrial enterprises provide retraining to some groups of personnel. The scope of retraining is comparable with the scope of retraining taking place in the East European countries, while the share of retraining costs in the overall expenditure on workforce is comparable with the West European countries. The results of the study suggest that the state training programs fail to satisfy the demand for general training thus imposing additional costs on industrial enterprises.
Microelectronics education at MIEM: from materials to system on chip/board
Bykov D., Petrosyants K. O., Kharitonov I. A. In bk.: Proceedings of the 8th European Workshop on Microelectronics Education, Darmstadt, Germany, 10-12 May 2010. Darmstadt: 2010. P. 39-44.