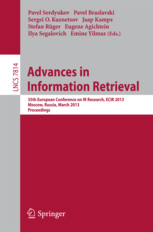 This book constitutes the refereed proceedings of the 20th International Symposium on String Processing and Information Retrieval, SPIRE 2013, held in Jerusalem, Israel, in October 2013. The 18 full papers, 10 short papers were carefully reviewed and selected from 60 submissions. The program also featured 4 keynote speeches. The following topics are covered: fundamentals algorithms in string processing and information retrieval; SP and IR techniques as applied to areas such as computational biology, DNA sequencing, and Web mining.

Technology Classification for the Purposes of Future Studies
Kuzminov I., Meissner D., Lavrynenko A. S. et al. Science, Technology and Innovation. WP BRP. Высшая школа экономики, 2018. No. 78/STI/2018.
The paper analyses problems associated with technologies classification for the purposes of futures studies, in order to ensure definitive inclusion of technologies in specific classes/types when conventional approaches to classification are applied. The evolution of classification approaches in the scope of science philosophy is shortly reviewed, together with the latest research on expert-based and computerised (algorithmic) classification and methodological dilemmas related to hierarchical aggregation of technological and production processes are analysed. Common problems with classifying technologies and industries frequently encountered in the age of converging technologies are examined, using the agricultural sector and related industries as an example. A case study of computerised classification of agricultural technologies based on clustering algorithms is presented, with a brief analysis of the potential and limitations of the methodology. For doing so a two-stage approach to classifying technologies is suggested, based on distinguishing between platform (multipurpose) and industry-specific technologies. An adaptive approach to analysing technological structures is proposed, based on many-to-many relationships and fuzzy logic principles.
Formal Concept Analysis Meets Information Retrieval 2013
Edited by: C. Carpineto, A. Napoli, S. Kuznetsov. Vol. 977. Aachen: CEUR Workshop Proceedings, 2013.

Formal Concept Analysis (FCA) is a mathematically well-founded theory aimed at data analysis and classication, introduced and detailed in the book of Bernhard Ganter and Rudolf Wille, \Formal Concept Analysis", Springer 1999. The area came into being in the early 1980s and has since then spawned over 10000 scientic publications and a variety of practically deployed tools. FCA allows one to build from a data table with objects in rows and attributes in columns a taxonomic data structure called concept lattice, which can be used for many purposes, especially for Knowledge Discovery and Information Retrieval. The \Formal Concept Analysis Meets Information Retrieval" (FCAIR) workshop collocated with the 35th European Conference on Information Retrieval (ECIR 2013) was intended, on the one hand, to attract researchers from FCA community to a broad discussion of FCA-based research on information retrieval, and, on the other hand, to promote ideas, models, and methods of FCA in the community of Information Retrieval. This volume contains 11 contributions to FCAIR workshop (including 3 abstracts for invited talks and tutorial) held in Moscow, on March 24, 2013. All submissions were assessed by at least two reviewers from the program committee of the workshop to which we express our gratitude. We would also like to thank the co-organizers and sponsors of the FCAIR workshop: Russian Foundation for Basic Research, National Research University Higher School of Economics, and Yandex.

Non-Gaussian Component Analysis: New Ideas, New Proofs, New Applications
Panov V. Economic risk. Discussion paper SFB 649. Humboldt-Universität zu Berlin , 2010. No. 2010-026.
In this article, we present new ideas concerning Non-Gaussian Component Analysis (NGCA). We use the structural assumption that a high-dimensional random vector $\vX$ can be represented as a sum of two components - a low-dimensional signal $\vS$ and a noise component $\vN$. We show that this assumption enables us for a special representation for the density function of $\vX$. Similar facts are proven in original papers about NGCA (\cite{Blan06}, \cite{Died07},  \cite{Kaw07}), but our representation differs from the previous versions. The new form helps us to provide a strong theoretical support for the algorithm; moreover, it gives some ideas about new approaches in multidimensional statistical analysis. In this paper, we establish important results for the NGCA procedure using the new representation, and show benefits of our method.
Automatic Detection Of Gender Identity: The Phenomenon Of Russian Women's Prose
Khazova A. Linguistics. WP BRP. НИУ ВШЭ, 2018. No. 71.
The article deals with the method of automatic detection of authors ' gender identity on the material of fiction prose of 1980-2000. During this period, there is a special construct, called "women's prose", which is characterized by a special genre and stylistic originality. We set ourselves the task to find out whether the concept of “women's prose” refers only to the non-text reality or is clearly reflected at the level of language. We have collected corpus of texts 1980-2000 and conducted that identified the most effective machine learning algorithms for the classification of male and female prose.
Text Mining Scientific Papers: A Survey on FCA-Based Information Retrieval Research
Poelmans J., Ignatov D. I., Viaene S. et al. In bk.: Advances in Data Mining. Applications and Theoretical Aspects. 12th Industrial Conference, ICDM 2012, Berlin, Germany, July 13-20, 2012. Proceedings. Vol. 7377. Berlin; Heidelberg: Springer, 2012. P. 273-287.

Formal Concept Analysis (FCA) is an unsupervised clustering technique and many scientific papers are devoted to applying FCA in Information Retrieval (IR) research. We collected 103 papers published between 2003-2009 which mention FCA and information retrieval in the abstract, title or keywords. Using a prototype of our FCA-based toolset CORDIET, we converted the pdf-files containing the papers to plain text, indexed them with Lucene using a thesaurus containing terms related to FCA research and then created the concept lattice shown in this paper. We visualized, analyzed and explored the literature with concept lattices and discovered multiple interesting research streams in IR of which we give an extensive overview. The core contributions of this paper are the innovative application of FCA to the text mining of scientific papers and the survey of the FCA-based IR research.

In this paper some of the task assignment methods and approaches are examined. The analysis of the algorithms considered is showing their strengths and weaknesses. Also, the ways of further research are presented, which aims to develop a methodology for task assignment in project management area.