This book is a selection of works by Emile Durkheim, including his “Rules of Sociological Method”, posthumously published collection of his essays “Sociology and Philosophy” (1924) and some other writings of this classic of sociology.

Introductory article on the life and work of the French sociologist Emile Durkheim (1858-1917). 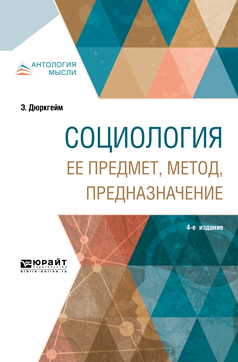 In his preface to the Conclusion of Durkheim’s The Elementary Forms of Religious Life, the editor of the Russian translation discusses a puzzling situation with the translations of Durkheim’s works. For one, at least until now, The Elementary Forms was the only major Durkheim work which had not been translated into Russian. This is especially strange considering the outstanding role this classic work plays in contemporary sociology. However, the author of this article suggests that there is a kind of logic behind this state of affairs. Not only is this book a major resource for sociological theory, but it is also a great mystery. The perception of this book has been substantially changing within the discipline for decades and the way sociologists read The Elementary Forms today is very different from the way they read it half-a-century or even a century ago. In this article, the author discusses the complicated and ever-changing influence this classic work has exerted on sociology. He addresses the complex issue of the perception of The Elementary Forms in sociology, and comments on several types of corresponding translation problems. In particular, he suggests that Durkheim introduced the “piacular rite”, an unorthodox type of ritual, out of the theoretic logic of his argument and in relation to his attempt to explain the feature of the ambiguity of the sacred. This publication also announces the printing of the unabridged Russian translation of the discussed book as scheduled for the autumn of 2018 from the Elementary Forms Press.

An analysis of the theory of social solidarity and social rules by French sociologist Emile Durkheim is carried out. Some new or revised interpretations of the ideas of social solidarity, social regulation, collective effervescence, anomie in Durkheim’s and Robert Merton’s theories are given.

Introductory article on the life and work of the French sociologist Emile Durkheim (1858-1917).

Some features of epistolary genre as a form of communication, its evolution and its role in history are analyzed in this article. A comparison with the other forms of communication is carried out. The author considers the significance of the personal correspondence for the study of the history of sociological thought. He illustrates these general statements by a comparative analysis of the correspondences of Marx, on the one hand, and of Durkheim, on the other hand, as well as of their respective role in the work of these classics.