The book is the collection of papers on history, archaeology and art critics of North-West Russia and Baltic area.

The article deals with the newly founded document – a letter from Ivan Saltykov to Polish king Sigismund III from Ladoga fortress shortly taken from the troops of Colonel Delaville. There comes also analysis of letter’s language and characteristic of the historical context of its appearance.

The article deals with so called Staraja Ladoga “Big Houses” – the specific dwellings of 9-10th cc. usually connected with the Scandinavian component in Staraja Ladoga settlement. The article include critical analysis of existing interpretations of the type and some qualifications of chronology and planigrahy of this group of dwellings. 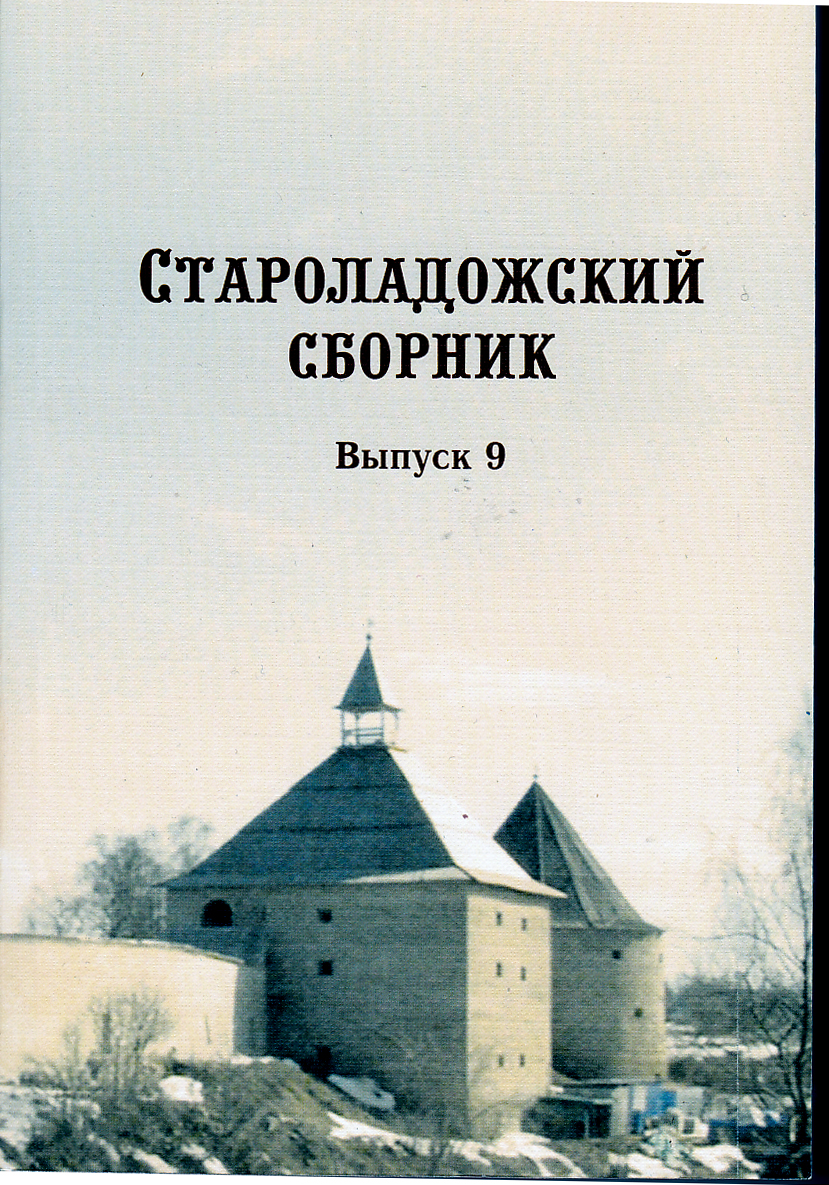 The paper outlines key concepts of Hanna Arendt’s political philosophy. The main purpose of the work is to analyze the political virtues — courage, pride and respect, as well as the fundamental abilities (powers) to forgive and to promise. Besides, it’s important to pay attention to Arendt’s understanding of political sphere (as the Web of Relationships) and the role of language in political life. Taking these into account, the main political virtues and abilities of ζῷον πολιτικόν bind together past, present and future of political body into one space of history (ἱστορία).

Two-Faced Status Of History: Between The Humanities And Social Sciences
Savelieva I. M. Humanities. HUM. Basic Research Programme, 2015. No. 83.
In modern academia, history is occasionally classified as a social science. My aim is to demonstrate why history has not become a ‘real’ social science, although historians who represent the most advanced trends within the discipline aspired to this. Two-faced status of history is problematized as a conflict between social theory and historical method when historians adopt the theories of the social sciences. I consider two topics to be central here: the uneasy relationship between social theories and methods, and the indispensability of the cognitive potential of the humanities. Although historians have sought theoretical renewal by turning to the theories of various social sciences, they rarely could use techniques that represent ways of cognition normally used by sociologists, psychologists, anthropologists, etc. – psychometric testing, sociometric monitoring, ethnographic description, in-depth interview, long-term observation. This situation has undeniable positive effects. The impossibility of using social science techniques ensures the autonomy of history and enables it to preserve its disciplinary core. At the same time, dealing with meanings and using the cognitive methods of the humanities, history can catch things more ephemeral than trends, patterns, mechanisms and statistical rules.
«Вехи» в контексте, или Интеллигенция как трагический элемент русской истории
Кантор В. К. Вопросы философии. 2010. № 4. С. 91-109.

Vague Idea of Studium: Petitions and Bulls of the Portuguese University at the Beginning of the Great Schism (1377–1380)
Rusanov A. V. Humanities. HUM. Basic Research Programme, 2017. No. WP BRP 153/HUM/2017.
The article analyzes argumentation that was used by the Papal curia and the University of Lisbon in the bulls and petitions during the short period when the kingdom of Portugal supported Anti-Pope Clement VII (1380–1381). Rhetoric of observed sources includes legal concepts and images borrowed from earlier theoretical texts and academic privileges. In the Curial practice the main legal conception of medieval university, the Studium generale, could be interpreted in the different ways, as it is demonstrated by the case of the Gregory XII’s bulls addressed to the Portuguese university in 1377. In 1380 the Portuguese academic corporation expected some grants and authorization of its status in exchange for support of the Avignon Pope. But controversial formulas and concepts of Clement VII’s bull In Superne dignitatis (that de jure founded a new Studium generale in Lisbon) rather strengthen his authority in Portugal than favoured realization of proclaimed university privileges.
Жандармы и модернизация местного управления в России (опыт и перспективы изучения).
Бикташева А. Н. Quaestio Rossica. 2015. № 2. С. 132-143.
Социология знания о прошлом
Савельева И. М., Полетаев А. В. М.: Издательский дом ГУ-ВШЭ, 2005.
Блистательный маргинал
Бойцов М. А. Новое литературное обозрение. 2017. Т. 145. № 3. С. 206-210.
Атлантида. Краткая история платоновского мифа
Видаль-Наке П. М.: Издательский дом НИУ ВШЭ, 2012.
СССР как фактор эволюции западных моделей социального государства
Кутепова Н. И. Научный эксперт. 2011. № 12. С. 62-71.
Математическая модель афинской демократии
Тангян А. Математические методы анализа решений в экономике, бизнесе и политике. WP7. Высшая школа экономики, 2006. No. 03.

Paleoconservatism of the Southern Agrarians
Belkovich R. Law. LAW. Высшая школа экономики, 2013
The emergence of the Tea Party movement in recent years has shown that under the surface of mainstream political life in the USA there exists a different layer of ideas, which cannot be satisfactorily described in terms of the Republican/Democrat dichotomy. These ideas have their origins in the foundation of the American Republic, which owes a lot to ancient and mediaeval political theory. In the twentieth century there was a revival of these ideas in the form of the so-called “paleoconservative” movements which rediscovered their ancient and mediaeval heritage. This paper focuses on one of them, the Southern Agrarian movement, as exemplary of this radical intellectual project.
"Russische Idee" im politischen Diskurs nach der Perestrojka.
Gusejnov G. Arbeitshefte der Forschungsstelle Osteuropa. Arbeitsheft. Forschungsstelle Osteuropa an der Universität Bremen, 1994. No. 7.
Историческая культура императорской России: формирование представлений о прошлом
Edited by: А. Н. Дмитриев М.: Издательский дом НИУ ВШЭ, 2012.
This book describes the multifaceted evolution of basic ideas concerning Russia and Europe’s past that were held by citizens of the Russian Empire from the second half of the 18th century to the early 20th century. Unlike a traditional, historiographical review focused only on the evolution of academic science, this one uses a more integrative approach based on a reconstruction of key concepts and mechanisms of historical culture (including education, the church and spiritual schools, museums, historical societies and archeographic institutions, regional communities, etc) The study of historical knowledge is complemented by extensive essays on the evolution of historical consciousness (including its receptive and creative components) and on the dynamics of historical imagination in Russian art and literature of the 18th and 19th centuries.
Ритуалы в медиатизированном обществе
Черных А. И. Политическая теория и политический анализ. WP14. Высшая школа экономики, 2012. № 03.
Социальный капитал и экономические представления российских и китайских студентов
Татарко А. Н. Психология образования в поликультурном пространстве. 2012. Т. 17. № 1. С. 47-55.
Культура русской диаспоры: эмиграция и мифы. Сборник статей
Таллинн: Таллинн, 2012.
Императорская Россия
Анисимов Е. В. СПб.: Питер, 2008.
In Search of the New "Turns": History and Theory in the 21 st century
Savelieva I. M. Humanities. HUM. Basic Research Programme, 2011. No. 02.
This study researches some of the most recent theories (elaborated by historians and social scientists) applied to the practice of historical research. The object of this research includes ideas, concepts, notions, methods of scholarly analysis of past social reality, as well as the emergence of new interdisciplinary fields, mutual borrowings and interventions. In this connection, the opposite process — the historization of some very disparate disciplinary discourses — is briefly addressed. It includes especially historical aspects of anthropology and sociology in the coming century. The research is based on information from journals specialized in history and theory, on leading history journals which demonstrate the state of art in various research areas, on sociological journals publishing material on historical sociology and on monographs from 1995—2010.
Proceedings of the Seventh conference on International Language Resources and Evaluation (LREC'10), Valletta, Malta, 17-23 May 2010
Valletta: ELRA, 2010.
Персонифицированная легитимность.
Скиперских А. В. Свободная мысль. 2005. № 8. С. 119-203.
Виртуальные расширения человека: новые основы культуры и бизнеса
Черных А. И. Политическая теория и политический анализ. WP14. Высшая школа экономики, 2012. № 04.
Экфрастический дискурс в романе Трейси Шевалье "Девушка с жемчужной сережкой
Тулякова И. И., Бочкарева Н. С. Мировая литература в контексте культуры. 2008. № 3(1). С. 150-154.