By the mid-eighteenth century, when the first university appeared in Russia, many European nations could boast of long and glorious university traditions. But Russia, with its poorly developed system of elementary and secondary education, lagged behind other European countries and seemed destined for a long spell of second-tier performance. Yet by the mid-twentieth century, the fully reformed system of Soviet higher education was perceived as an unexpected success, one that transformed the country into a major scientific power throughout the Cold War. Today, the international community is keeping close tabs on the fast development of world-class higher education in Russia, specifically its large-scale changes and reforms.

Higher Education in Russia is the first comprehensive, up-to-date overview and analysis of modern Russian higher education. Aimed at a large international audience, it describes the current realities of higher education in Russia, as well as the main principles, logic, and relevant historical and cultural factors. Outlining the evolution of the higher education system in tsarist Russia throughout the nineteenth century, Yaroslav Kuzminov and Maria Yudkevich describe the development of its mass-scale higher education system from the end of the Second World War to the collapse of the Soviet Union and beyond. They also discuss the principal elements of today's Russian higher education system while exploring the system's governance model and the logic of its resource allocation. They touch on university selection, the structure of the country's academic profession, the organization of research, and the major excellence programs of leading universities.

Research target: Economics and Management
Language: English
Text on another site
Keywords: higher education
Publication based on the results of:
Higher education market agents in the digitalization context: data as a basis for analyzing incentives and strategies (2022) 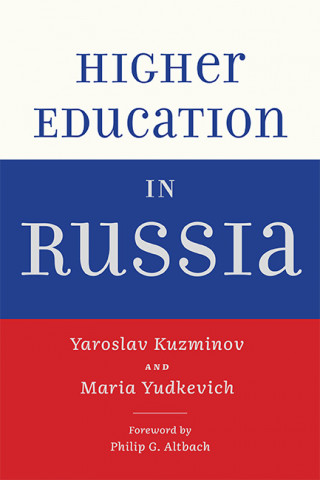