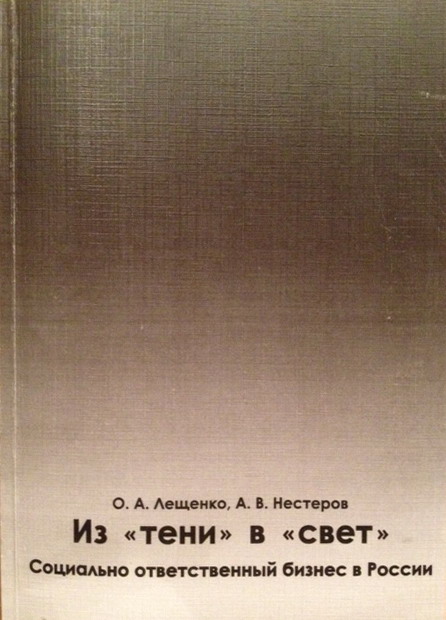 Similar publications
Эстетика как дисциплина профессиональной подготовки современного менеджера
Гриднева Е. А. В кн.: Двухуровневая система образования и ее учебно-методическое обеспечение: материалы межвузовской научно-методической конференции. Н. Новгород: Национальный исследовательский университет Высшая школа экономики в Нижнем Новгороде, 2010. С. 32-34.
Corporate Volunteering And Its Influence On Employee Civil Engagement In Russia
Krasnopolskaya I. Sociology. SOC. Высшая школа экономики, 2014
This paper is devoted to identifying and analyzing the role of corporate volunteering in functioning as the infrastructure of volunteer activity in Russia and the influence of employee civil engagement. Four main functions of third-sector infrastructure are used in this article: motivation and mobilization, organization and support of civil activity, education and socialization, representation and interests protection, as well as net construction and communications. The theoretical background of the research methods lie in the institutional treatment of corporate social responsibility. The role of corporate volunteering in employee civic engagement based on a comparison of the employees who participate in volunteering events and those who do not is examined in detail. Based on the results of binary logistic regression analysis, we conclude that employee participation in corporate volunteering positively influences their civil engagement outside the corporation and satisfaction with various aspects of one’s life. Corporate volunteers (n=399) are statistically more likely to report civil engagement and personal happiness and satisfaction than employees who do not take part in corporate volunteering events (n=402). Corporate volunteering is positively related with current and future civil engagement, including monetary donations.
Бизнес как система. Разговор по душам о ситуациях и понятиях
Городнов А. Г., Альтшулер И. Г. СПб.: Питер, 2012.
Российская корпорация и региональные власти: модели взаимоотношений и их эволюция
Yakovlev A. A. WP BRP 55/LNG/2017. Высшая школа экономики, 2007. No. 14.
Relations between enterprises and authorities in Russian regions have attracted the attention of many researchers since the mid-1990s. At present, the issues raised by these relations are just as urgent as before because of two current trends. On one hand, growing pressure from the global market is an objective reason for the business community in Russia to seek government support. However, after the Yukos affair Russian business in general found itself subjugated to the federal authorities. For this reason, Russian companies may be expected to more closely cooperate with regional and local administration in pursuit of more favorable conditions for business. On the other hand, the Russian fiscal system was reformed and authority between the federal center and the Russian regions were redistributed so that the budgets of regional governments were reduced and their liabilities remained almost unchanged. Thus, regional authorities may in turn have incentives to change their policy posture towards the business community. In this paper we will use the results of a new empirical study of Russian joint stock companies to assess the extent to which these two trends affected the real mechanisms of interaction between businesses and the state on the regional level.
Язык как система ориентиров в социальном пространстве
Никитина Е. Б. В кн.: Информационно-коммуникационное пространство и человек (Материалы II международной научно-практической конференции 15-16 апреля 2012 г.). Пенза; М.; Витебск: Научно-издательский центр "Социосфера", 2012. С. 32-36.
The following article is an account of the author’s opinion of the role of language within the framework of society. The paramount idea is that language should not be viewed simply as a means of communication. The author suggests a more profound understanding of language as a medium between society and the culture against the background of which it manifests itself. The aforementioned conception of language provides the author with the opportunity to assert that language constitutes a system of guidelines without which society would lose its identity.
Корпоративная социальная ответственность или государственное регулирование: институциональный анализ с приложением к России
Polishchuk L. Научные доклады Института институциональных исследований. WP10. Высшая школа экономики, 2009. No. 01.
The paper considers corporate social responsibility (CSR) as an institutional alternative to government regulation, which implements Coase-type bargains between corporations and their stakeholders. Comparative analysis of costs and benefits of these two institutions presented in the paper provides basis for explanation and assessment of various CSR models. Russian CSR is used as an illustration; our analysis reveals strong institutional complementarity between CSR, on the one hand, and protection of property rights and availability of social capital, on the other.
Business under crisis: to start or to discontinue? (The case of Russia)
Alimova T. A., Chenina A., Chepurenko A. In bk.: Theory of Entrepreneurship: new results and prospects (Research papers). M.: 2011. P. 6-42.
Анализ тенденций развития зарубежной корпоративной отчетности
Соловьева О. В., Сорокина К. В. Аудит и финансовый анализ. 2011. № 3. С. 232-239.