The Transformation of State Socialism. System Change, Capitalism or Something Else?

This book considers several aspects of the transformation of the former state socialist countries: social and economic outcomes; forces in the transformation process; problems of consolidation of the new regimes; and alternative scenarios. The book evaluates the course of transformation of state socialist societies. It focuses on economic change and its impact on inequality and health. Comparisons are made between the successful central European countries now members of the European Union with those of the former Soviet Union. There are detailed studies of the transformation of the (former) German Democratic Republic, Czech Republic, Russia, Belarus, Ukraine, as well as the impact on Poland. A feature of the book is the impact of the collapse of state socialism on countries of Asia and the Third World. Alternative scenarios are considered, with specific chapters on China, Cuba, and North Korea. The book contemplates the alternative types of society that might replace state socialism, particularly state capitalism and market socialism.

Chapters
The Russian Transformation: a New Form of Etacratism?
Shkaratan O. I., , in: The Transformation of State Socialism. System Change, Capitalism or Something Else?. .: Hampshire: Palgrave Macmillan, 2007.. P. 143-158.
Ovsey Shkaratan is Professor in ordinary in the State University - Higher School of Economics (Russia, Moscow). He has written extensively on the stratification and social structure of Russia, and on the transformation of postcommunist systems after 1989. ...
Priority areas: economics sociology humanitarian
Language: English
Keywords: социализмпостсоветская трансформацияpost-communist transitionpost-soviet transformationsocialismsociology of economic developmentvarieties of capitalismпосткоммунистическая трансформациясоциология социально-экономического развитиявиды капитализмаразнообразие капитализма 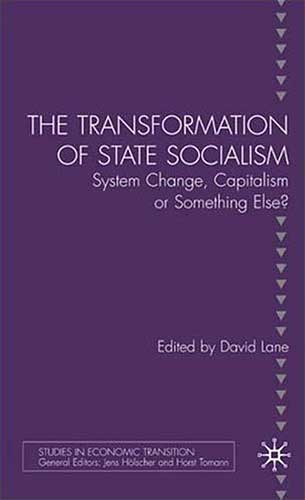