The monograph presents a scientific, sociological, bibliometric and semiotic analysis of the status of classics in the social sciences of the 20th century such as economics, sociology, psychology and history. The synthesis of these approaches allows the authors to explore a wide range of problems connected with the study and use of the classical heritage. The book examines in detail the changes of the classics and its substantive characteristics; transformation of its body in connection with the growth of scientific knowledge and the rapid increase in the number of separate sub-disciplines, research areas and fields, the role and functions of the classics in the research process and the higher education.

According to the authors’ concept, although “classics” lose their status of superiority over the modernity, it instead acquires the status of “foundation” of the present and in fact becomes part of “modernity” in the broadest sense, and remains in demand, just like late scientific ideas, concepts and theories.

This book is intended for a wide range of readers — economists, political scientists, historians,
and sociologists. 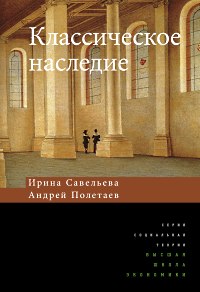