Featuring extensive revisions to the text as well as a new introduction and epilogue--bringing the book completely up to date on the tumultuous politics of the previous decade and the long-term implications of the Soviet collapse--this compact, original, and engaging book offers the definitive account of one of the great historical events of the last fifty years.

Combining historical and geopolitical analysis with an absorbing narrative, Kotkin draws upon extensive research, including memoirs by dozens of insiders and senior figures, to illuminate the factors that led to the demise of Communism and the USSR. The new edition puts the collapse in the context of the global economic and political changes from the 1970s to the present day. Kotkin creates a compelling profile of post Soviet Russia and he reminds us, with chilling immediacy, of what could not have been predicted--that the world's largest police state, with several million troops, a doomsday arsenal, and an appalling record of violence, would liquidate itself with barely a whimper. Throughout the book, Kotkin also paints vivid portraits of key personalities. Using recently released archive materials, for example, he offers a fascinating picture of Gorbachev, describing this virtuoso tactician and resolutely committed reformer as "flabbergasted by the fact that his socialist renewal was leading to the system's liquidation"--and more or less going along with it.

At once authoritative and provocative, Armageddon Averted illuminates the collapse of the Soviet Union, revealing how "principled restraint and scheming self-interest brought a deadly system to meek dissolution." 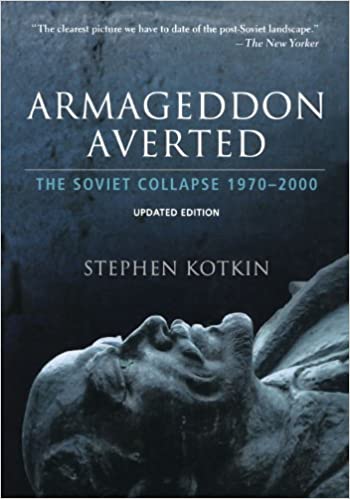