The book is the first research in the Russian scholarly tradition of accounts, notes and memoirs of Russian and Western travelers who visited Mongolia in 17th to early 20th century as a sources on traditional state and law of the Mongols. The authors of notes were diplomats and intelligence officers, scientists and merchants, missionaries and even “extreme tourists.” Using their notes gave an opportunity to form a view on different aspects of power and legal relations in Mongolia. Diverse goals of trips to Mongolia caused visits of foreign contemporaries to various regions of Mongolia at different stages of their political and legal development. The analysis of that sources allows to create the “legal map” of Mongolia during the period of independent khanates and under the power of the Manchu dynasty of Qing including specific features of the legal status of the Northern Mongolia (Khalkha), Southern (Inner) Mongolia and the Zunghar Khanate which was independent state till the mid of the 18th c. The research is based on the analysis of about 200 texts written by travelers as well as on additional materials on history of foreign travels to Mongolia, on persons of travelers themselves. This approach allowed to form an impartial position on the notes and to analyze them critically.
The book is designed for specialists in the field of history of state and law, comparative legal studies, legal and political anthropology, historians, mongolists, specialists in source study, political scientists and ethnographers. It also could be an additional material for students who study these specialties. 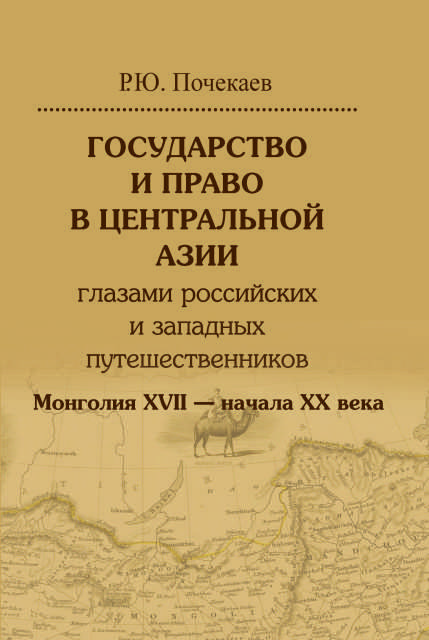