This is a companion book to Asymptotic Analysis of Random Walks: Heavy-Tailed Distributions by A.A. Borovkov and K.A. Borovkov. Its self-contained systematic exposition provides a highly useful resource for academic researchers and professionals interested in applications of probability in statistics, ruin theory, and queuing theory. The large deviation principle for random walks was first established by the author in 1967, under the restrictive condition that the distribution tails decay faster than exponentially. (A close assertion was proved by S.R.S. Varadhan in 1966, but only in a rather special case.) Since then, the principle has always been treated in the literature only under this condition. Recently, the author jointly with A.A. Mogul'skii removed this restriction, finding a natural metric for which the large deviation principle for random walks holds without any conditions. This new version is presented in the book, as well as a new approach to studying large deviations in boundary crossing problems. Many results presented in the book, obtained by the author himself or jointly with co-authors, are appearing in a monograph for the first time. 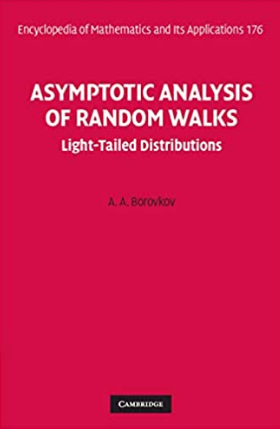