Logic, Language, and Security. Essays Dedicated to Andre Scedrov on the Occasion of His 65th Birthday

This Festschrift is in honor of Prof. Andre Scedrov at the University of Pennsylvania. Scedrov has laid the foundations for a number of now well-established domains in mathematics and computer science including Proof Theory, Logic in Computer Science, Foundations in Computer Security, and Linguistics.

This combination of breadth and penetrating originality is rare and impressive. This Festschrift only tries to reflect this combination with a number of contributions distributed among these different topics.

It contains 11 technical articles and 3 short papers organized among sections on Logic, Logic and Computing, Logic and Security, and Logic and Language. Those articles are authored by researchers around the world, including North America, Russia, Europe, and Japan, that have been directly or indirectly impacted by Andre Scedrov.

Chapters
A \(\Pi^0_1\)-bounded fragment of infinitary action logic with exponential
Kuznetsov S., , in: Logic, Language, and Security. Essays Dedicated to Andre Scedrov on the Occasion of His 65th Birthday. Issue 12300.: Cham: Springer, 2020.. P. 3-16.
Infinitary action logic is an extension of the multiplicative-additive Lambek calculus with Kleene iteration, axiomatized by an 𝜔-rule. Buszkowski and Palka (2007) show that this logic is \(\Pi^0_1\)-complete. As shown recently by Kuznetsov and Speranski, the extension of infinitary action logic with the exponential modality is much harder: \(\Pi^1_1\)-complete. The raise of complexity is of ...
Priority areas: IT and mathematics
Language: English
DOI
Text on another site
Keywords: computer securityformal languagesLogic 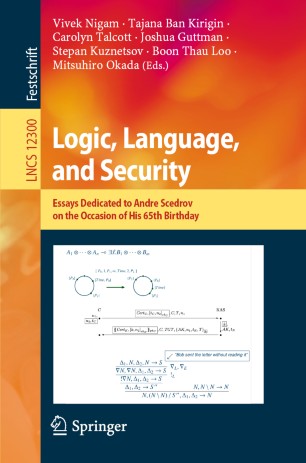