The problem of community detection in a network with features at its nodes takes into account both the graph structure and node features. The goal is to find relatively dense groups of interconnected entities sharing some features in common. We apply the so-called data recovery approach to the problem by combining the least-squares recovery criteria for both, the graph structure and node features. In this way, we obtain a new clustering criterion and a corresponding algorithm for finding clusters/communities one-by-one. We show that our proposed method is effective on real-world data, as well as on synthetic data involving either only quantitative features or only categorical attributes or both. Our algorithm appears competitive against state-of-the-art algorithms.

We define and find a most specific generalization of a fuzzy set of topics assigned to leaves of the rooted tree of a taxonomy. This generalization lifts the set to a “head subject” in the higher ranks of the taxonomy, that is supposed to “tightly” cover the query set, possibly bringing in some errors, both “gaps” and “offshoots”. Our hybrid method involves two more automated analysis techniques: a fuzzy clustering method, FADDIS, involving both additive and spectral properties, and a purely structural string-to-text relevance measure based on suffix trees annotated by frequencies. We apply this to extract research tendencies from two collections of research papers: (a) about 18000 research papers published in Springer journals on data science for 20 years, and (b) about 27000 research papers retrieved from Springer and Elsevier journals in response to data science related queries. We consider a taxonomy of Data Science based on the Association for Computing Machinery Classification of Computing System (ACM-CCS 2012). Our findings allow us to make some comments on the tendencies of research that cannot be derived by using more conventional techniques. 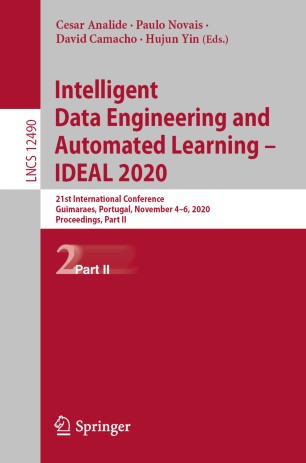 Graph-based approaches are empirically shown to be very successful for the nearest neighbor search (NNS). However, there has been very little research on their theoretical guarantees. We fill this gap and rigorously analyze the performance of graph-based NNS algorithms, specifically focusing on the low-dimensional (d << log n) regime. In addition to the basic greedy algorithm on nearest neighbor graphs, we also analyze the most successful heuristics commonly used in practice: speeding up via adding shortcut edges and improving accuracy via maintaining a dynamic list of candidates. We believe that our theoretical insights supported by experimental analysis are an important step towards understanding the limits and benefits of graph-based NNS algorithms.

A genetic algorithm for autonomous navigation in partially observable domain
Maxim Borisyak, Ustyuzhanin A. arxiv :: cs :: Cornell University. arxiv :: cs :: Cornell University. Cornell University, 2015
The problem of autonomous navigation is one of the basic problems for robotics. Although, in general, it may be challenging when an autonomous vehicle is placed into partially observable domain. In this paper we consider simplistic environment model and introduce a navigation algorithm based on Learning Classifier System.
Improving prediction of stock market indices by analyzing the psychological states of Twitter users.
Porshnev A., Redkin I. E., Shevchenko A. V. Economics/EC. WP BRP. Высшая школа экономики, 2013. No. 22.
In our paper, we analyze the possibility of improving the prediction of stock market indicators by conducting a sentiment analysis of Twitter posts. We use a dictionary-based approach for sentiment analysis, which allows us to distinguish eight basic emotions in the tweets of users. We compare the results of applying the Support Vector Machine algorithm trained on three sets of data: historical data, historical and “Worry”, “Fear”, “Hope” words count data, historical data and data on the present eight categories of emotions. Our results suggest that the Twitter sentiment analysis data provides additional information and improves prediction as compared to a model based solely on information on previous shifts in stock indicators.
Centrality Measures And Clustering Analysis in a Retail Food Network
Aleskerov F. T., Meshcheryakova N., Сергеева З. В. et al. In bk.: 2017 IEEE 11th International Conference on Application of Information and Communication Technologies. Vol. 1. M.: Institute of Electrical and Electoronics Engineers, 2017. P. 48-52.

Trading processes is a vital part of human life and any unstable situation results in the change of living conditions of individuals. We study the power of each country in terms of produce trade. Trade relations between countries are represented as a network, where vertices are territories and edges are export flows. As flows of products between participants are heterogeneous we consider various groups of substitute goods (cereals, fish, vegetables). We detect key participants affecting food retail with the use of classical centrality measures. We also perform clustering procedure in order to find communities in networks.

In an effort to make reading more accessible, an automated readability formula can help students to retrieve appropriate material for their language level. This study attempts to discover and analyze a set of possible features that can be used for single-sentence readability prediction in Russian. We test the influence of syntactic features on predictability of structural complexity. The readability of sentences from SynTagRus corpus was marked up manually and used for evaluation.

Regression Tree Model for Analysis of Demand with Heterogeneity and Censorship
Ozhegov E. M., Ozhegova A. Economics/EC. WP BRP. Высшая школа экономики, 2017. No. WP BRP 174/EC/2017.
In this research we analyze new approach for prediction of demand. In the studied market of  performing arts the observed demand is limited by capacity of the house. Then one needs to account for demand censorhip to obtain unbiased estimates of demand funnction parameters. The presence of consumer segments with dierent purposes of going to the theatre and willingness-to-pay for performance and ticket characteristics causes a heterogeneity in theatre demand. We propose an estimator for prediction of demand that accounts for both demand censorhip and preferences heterogeneity. The estimator is based on the idea of classiffication and regression trees and bagging prediction aggregation extended for prediction of censored data. Our algorithm predicts and combines predictions for both discrete and continuous parts of censored data.We show that our estimator performs better in terms of prediction accuracy compared with estimators which accounts either for censorship, or heterogeneity only. The proposed approach is helpful for finding product segments and optimal price setting.
Современные проблемы и тенденции компьютерной лингвистики
Толдова С. Ю., Ляшевская О. Н. Вопросы языкознания. 2014. № 1. С. 120-145.