In the liturgical literature of the Church of East (the so-called Nestorian), the Wardā collection, meant for the liturgical performance at night services on the festival days and Sundays of the whole liturgical year, holds a special place. Strophic hymns – ʿōnītā (pl. ʿōnyātā) – contained in the collection are still a part of the liturgy of the East Syrian Church. Altogether, the collection comprises more than 120 hymns, most of which are ascribed to Gīwargīs Wardā (13th century), who is the eponym of this book. According to their content, the hymns can be divided into five categories: exegetic, hagiographic, apocryphal narratives, describing historical events and calamities, dedicated to other subjects.
The first part of the book is a detailed study of the textual, poetical and historical peculiarities of the Wardā collection. Ist evolution stages and the main types have been reconstructed. A special chapter focuses on the position of this book in Syriac church literature and defines ist main sources. The second part represents a critical edition of 35 hymns from the Wardā collection according to the existing manuscripts, including English translations. Many of these hymns have been translated for the first time. 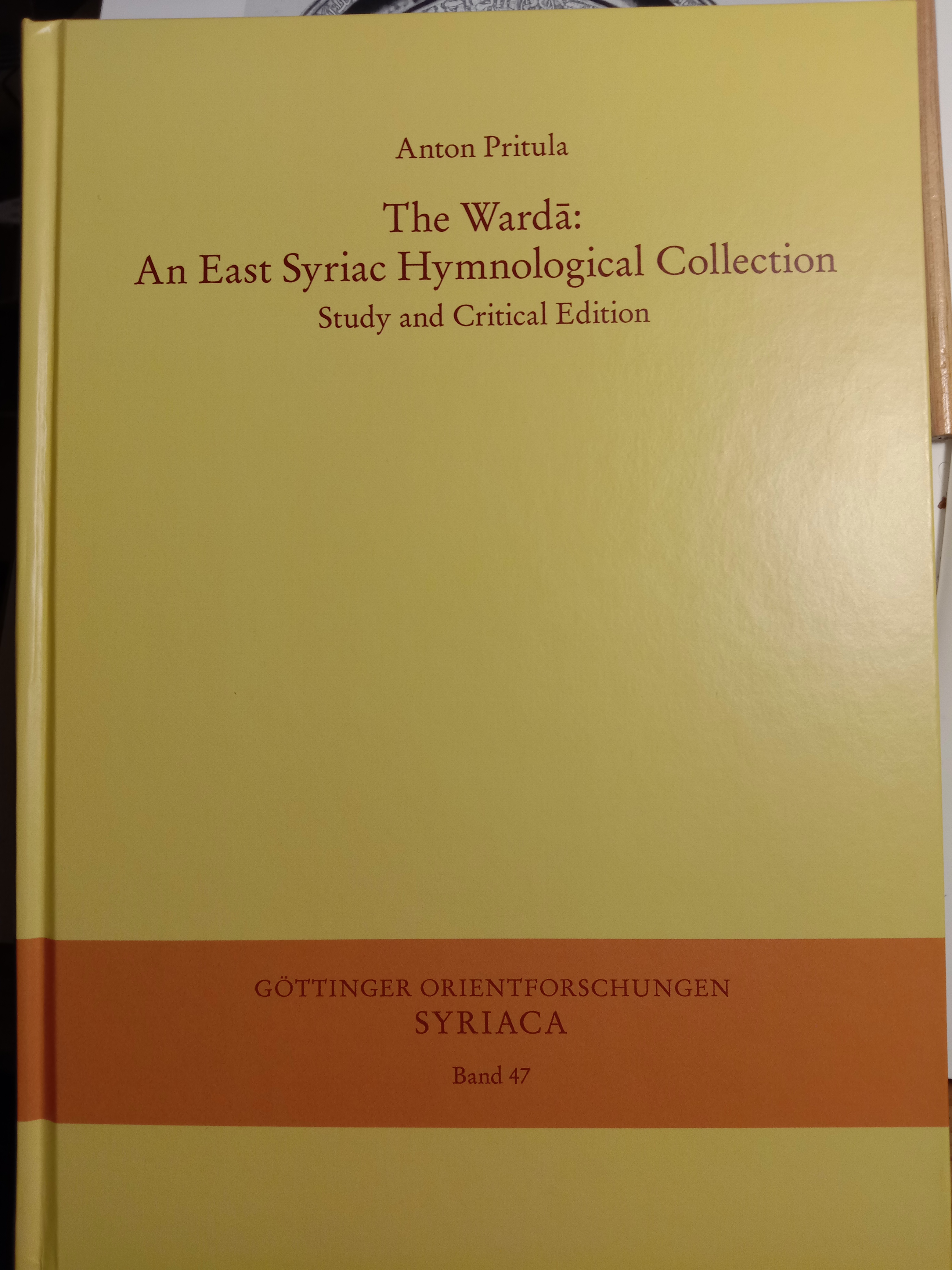 The" Library "of Patriarch Photius, Codex 52 contains evidence of the Acts of the Council of Side, which is used to be taken as one of the main elements of the "anti-messalian dossier" in the Byzantine Church tradition. Whether this Council took place in fact and in what form is not known. However, the available data suggest a great deal of confusion and possibly falsification of its entire story. The main characters (Lampetius, Sabba, Dadoes etc) from the Syriac side look like fictitious. From the comparison of the names with the Syriac documents (Philoxeni Ad Patricium) follows, that , the chief heretic – "Lampetius/ Malpatius"  is a fictitious figure. Behind him hides the Syrian Adelphius, a disciple of St. Julian Sabba. The history of "messalianism" in the light of a new perspective of the research on the Late Antique heresiology appears as a great misunderstanding, caused by the conflict of ascetic models. The Syriac model was based on the idea of apotage (disconnection from the world), which three hundred years later was fully adopted in the Greek asceticism. The dossier of the "messalian heresy" (connected with Ps.-Macarius writings) was further used against the new releigous movements of the Middle Ages (paulicianism, bogomilism). Historical inconsistencies in the middle-century anti-heretic literature ceased to confuse readers, because the whole history of "messianism" turned into a myth.

The article (being the 1st part of the cycle) is dedicated to the ascetic themes in Mār Aphrem the of Nisibis (St. Ephrem the Syrian) treated in different parts of his corpus. Asceticism is reflecxted in mār Aphrem under three main forms: city asceticism, wandering asceticism (xeniteia) and the sub-form of the latter, boskoi-asceticism. The wandering tradition got strog criticism in the Latin and Greek tradition as gyrovagi and ‘messalians’. In the Syriac tradition, the competition between wanderinf and coenobion lasted much longer. Aphrem’s mêmrā (metrical homily) On the hermits and solitaries belongs to the ascetical cycle and is interesting, first of all, by its description of the local forms of asceticism (īḥı̄ḏayūṯā) in Upper Mesopotamia and Syria. It describes the practices of desert hermitage and social self-isolation, which are associated with the initial stage of the ‘messalian’ movement which turns to be a form of the national Syrian asceticism. The translation of verses 1–100 of the memra accompanies the text.