The book is devoted to the problem of time. It examines both traditional and completely new concepts of time. The relevance of the topic is due to modern discoveries in the field of confirming the fundamental foundations of quantum mechanics, namely, experiments to check the Legetta-Garg inequalities, experiments with a "quantum eraser that confirm the effect of "interference in time ". These facts indicate the need to revise the concept of time and reality that has developed in modern physics and philosophy, to which this book is devoted. The authors consider the problem of time from the point of view of philosophy, logic and modern physics. For a wide range of readers interested in the problems of time.

To overcome the difficulties in studying the concept of time, the author proposes to analyze philosophical concepts and scientific theories from the point of view of two aspects of time that are not reducible to each other. These are: metric time and development time. It is shown that the division of time into two aspects is based on the philosophical tradition and helps to overcome the contradictions between the “frozen” time of the special theory of relativity and the observed “arrows of time” in cosmology, quantum mechanics and thermodynamics. A number of arguments in favor of the popular philosophical concept of the block universe based on the equations of the special theory of relativity are analyzed. These arguments are shown to be based solely on the metric aspect of time. Arguments in favor of the informational nature of development time are considered.

The article is devoted to the problem of interpreting the concept of time in the context of some concepts of modern physics. This fundamental concept inevitably arises in physical theories, but there is still no adequate description of it in the philosophy of science. In the theory of relativity, quantum field theory, the standard model of elementary particle physics, the theory of loop quantum gravity, superstring theory, and other recent theories, the idea of time is explicitly or implicitly present. Sometimes, as, for example, in the special theory of relativity, it plays a pronounced role, sometimes not, but somehow it is and is implied by the content of the theory and in some cases by its mathematical apparatus. Especially important for solving the problem is the fundamental difference between the space-time processes of the microcosm and the macrocosm. In this connection, there is a need to understand time as it appears in modern physics, its description in the language of philosophy (there is also no satisfactory mathematical apparatus for describing time). This will make it possible to get closer to the answer to the question about the properties of time and, if not answered, then formulate the correct question about what it is. To this end, this study analyzes the key concepts of modern physics, taking into account the historical-scientific and historical-philosophical perspectives, which in some cases allows us to detect the continuity of ideas related to the understanding of time, their development, as well as the emergence of fundamentally new ones. In the course of the analysis, the characteristics of time that are correct from the point of view of physical theory are formulated, and an attempt is made to raise the question of the nature of time. Based on the work done, conclusions are drawn about the current state of the problem and the prospects for its solution. 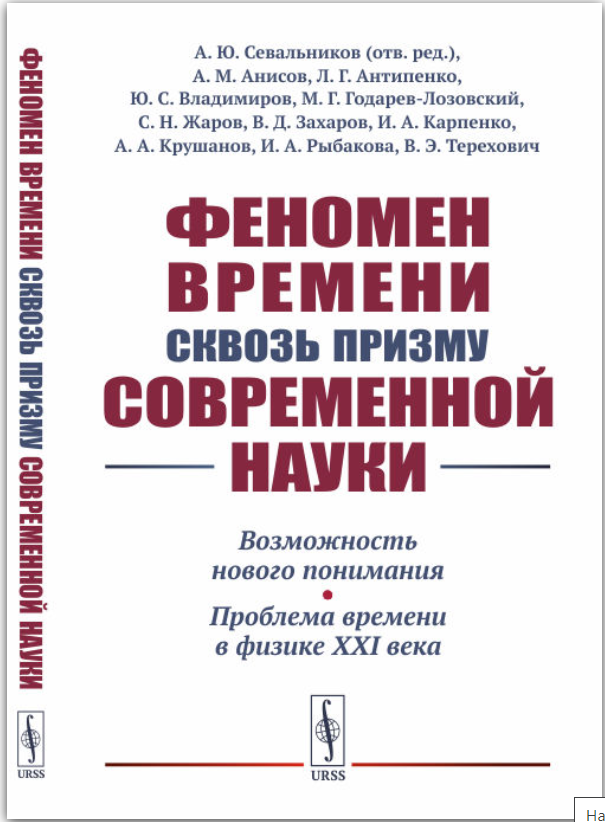 Similar publications
The concept of the space interpretation problem in some of the modern physics multiverse hypotheses
Ivan A. Karpenko. Humanities. HUM. Basic Research Programme, 2015. No. 98.
In order to determine the concept of space interpretation in several multiverse hypotheses, this article analyzes a number of them, which arises from some theories of modern physics. The interpretation of space in the history of philosophy and science and their interrelation with modern physical notions are presented. The research is based on the cognitive interpretation method of the contents of formalistic mathematics and physics theories, the method of comparative analysis (analysis of philosophical texts), the hermeneutical method, and the phenomenological method (analysis of representations). The author shows how the context of modern physics multiverse hypotheses contributes to new connotations in the perception of space. The research draws some conclusions about the present status of the philosophical perception of space.
Концепция когнитивных кадров
Алюшин А. Л. Философские науки. 2010. № 11. С. 104-115.
Question of Consciousness: to Quantum Mechanics for the Answers
Karpenko I. Studia Humana. 2014. Vol. 3. No. 3. P. 16-28.

The article presents the possible role of consciousness in quantum-mechanical description of physical reality. The widely spread interpretations of quantum phenomena are considered as indicating the apparent connection between conscious processes (such as observation) and the properties of the microcosm. The reasons for discrepancies between the results of observations of the microcosm and macrocosm and the potential association of consciousness with these reasons are closely investigated. The mentioned connection is meant to be interpreted in the sense that the probable requirement for a complete understanding of quantum theory is the adequate description of consciousness within it and that the correct theory of consciousness should include quantum-mechanical theoretical apparatus. In this context, the question about the methods of scientific cognition is discussed, in particular, the problem of the place and the importance of intellectual intuition in science and philosophy of science. The author draws the conclusiions about the current state of the “measuring” problem in its relationship with consciousness.

Question of Consciousness: to Quantum Mechanics for the Answers
Karpenko I. Working Papers of Humanities. WP. Издательский дом НИУ ВШЭ, 2014. No. 44.
The article looks at the possible role of measurement in a quantum-mechanical description of physical reality. The widely spread interpretations of quantum phenomena are considered as indicating an apparent connection between conscious processes (such as observation) and the properties of the microcosm. The reasons for discrepancies between the results of observations of the microcosm and macrocosm and the potential association of consciousness with these reasons are closely investigated. This connection can be interpreted in the sense that the probable requirement for a complete understanding of quantum theory is an adequate description of consciousness within this theory and that the correct theory of consciousness should include a quantum-mechanical theoretical apparatus. The author draws conclusions about the current state of the “measuring” problem and its relationship with consciousness.
Low-dimensional physics of ultracold gases with bound states and the sine-Gordon model
Burovski E., Jolicoeur T., Orso G. European Physical Journal: Special Topics. 2013. Vol. 217. P. 3.

One-dimensional systems of interacting atoms are an ideal laboratory to study the Kosterlitz-Thouless phase transition. In the renormalization group picture there is essentially a two-parameter phase diagram to explore. We first present how detailed experiments have shown direct evidence for the theoretical treatment of this transition. Then generalization to the case of two-component systems with bound state formation is discussed. Trimer formation in the asymmetric attractive Hubbard model involve in a crucial this kind of physics.

The paper will provide a non-classical view on the nature of time according to Kant's paradigm. Based on the criticism presented by Henri Bergson, the possibility of understanding the Kantian Time will be considered in two ways: as the Metaphysical and Projective Time contained in Kant's social philosophy, and the Epistemological Time, known from the "Critic" series.

The monograph "Philosophy of Physics: towards New Principles of New Knowledge" is intended both for those who are just discovering the world of philosophy of science in the most fundamental field – physics, and for specialists who are professionally engaged in the topic and are interested in the most relevant research. The author analyzes a number of key problems of modern physics and cosmology, offers original interpretations and solutions, and also discusses the prospects for the development of science in the context of attempts to create a "Theory of Everything". The book focuses on the physical theories of the multiverse, the new principles of scientific knowledge derived from these theories, and the connection between consciousness and concrete physical reality.

This book addresses the issue of cognitive semantics’ aspects that cannot be represented by traditional digital and logical means. The problem of creating cognitive semantics can be resolved in an indirect way. The electromagnetic waves, quantum fields, beam of light, chaos control, relativistic theory, cosmic string recognition, category theory, group theory, and so on can be used for this aim. Since the term artificial intelligence (AI) appeared, various versions of logic have been created; many heuristics for neural networks deep learning have been made; new nature-like algorithms have been suggested. At the same time, the initial digital, logical, and neural network principles of representation of knowledge in AI systems have not changed a lot. The researches of these aspects of cognitive semantics of AI are based on the author's convergent methodology, which provides the necessary conditions for purposeful and sustainable convergence of decision-making.