Methionine dependence of cancer and aging: methods and protocols

The anti-cancer efficacy of methionine γ-lyase (MGL) from Clostridium sporogenes (C. sporogenes) is described. MGL was active against cancer cells in vitro and in vivo. Doxorubicin (DOX) and MGL were more effective on A549 human lung cancer growth inhibition than either agent alone in vitro and in vivo. The growth inhibitory effect of DOX + MGL on A549 xenograft in vivo was reflective of the results obtained in vitro. 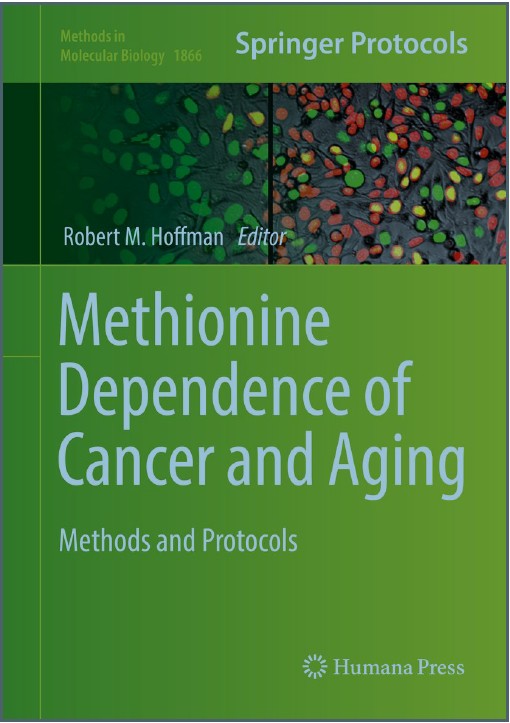 The anti-cancer efficacy of methionine γ-lyase (MGL) from Clostridium sporogenes (C. sporogenes) is described. MGL was active against cancer cells in vitro and in vivo. Doxorubicin (DOX) and MGL were more effective on A549 human lung cancer growth inhibition than either agent alone in vitro and in vivo. The growth inhibitory effect of DOX + MGL on A549 xenograft in vivo was reflective of the results obtained in vitro.

We studied the expression of peroxiredoxin genes (PRDX1, PRDX2, PRDX3, and PRDX6) in human erythroleukemia K652, human breast carcinoma MCF-7, and human ovarian carcinoma SKOV-3 cells during cisplatin resistance development. It was found that drug resistance formation was accompanied by a significant increase in the expression of PRDX1, PRDX2, PRDX3, PRDX6 genes in all cancer cell strains, which confirms the important contribution of redox-dependent mechanisms into the development of cisplatin resistance of cancer cells.