The book analyzes the legal aspects of the interaction between the Russian empire and the states of Central Asia since the early 18th century to 1917. The author describes the main stages of Russian influence on the legal development of the Central Asian khanates, outlining the main directions of this influence. He focuses on the ways and methods of the Russian legal policy employed in the Central Asian khanates placed under the Russian protectorate. He also explores the problem of the Russian legal policy implemented in the Central Asian regions with special legal status as well as under conditions of martial law, revolutionary situation, etc. The research undertaken by the author allows understanding of the historical experience of the integration within the Eurasian space of which the next stage is being actively realized today as well as evaluating the efficiency, strengths and weaknesses of the legal means of this integration in the 18th through the early 20th centuries.
The book is designed for specialists in the fields of history of state and law, Russian history, Eastern studies, political science, as well as for undergraduate students majoring in the aforementioned specialties. 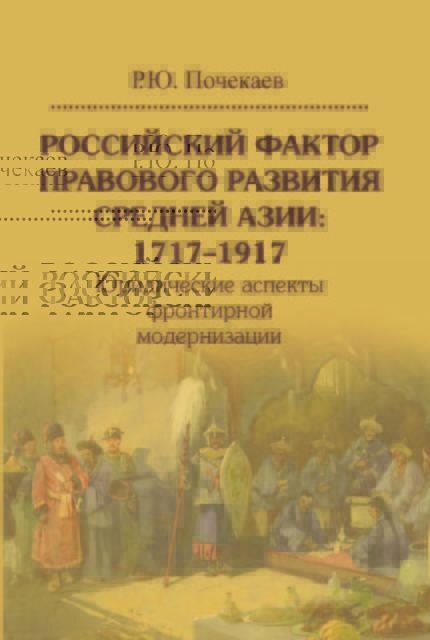 The Legitimacy of the Bolshevik Order, 1917-1918: Language Usage in Revolutionary Russian Law
Borisova T. Y. Law. LAW. Высшая школа экономики, 2012. No. 05.
The article describes and analyzes the legislative politics of revolutionary regimes in Russia in 1917-1918. The author aims to demonstrate the political meaning of the form of early Soviet legislation and its legitimizing effect. The revolutionary legislators often used specific language in the new laws as a vehicle of legitimacy, i.e. to make the people comply. The two main types of legal language used by the Bolsheviks can be interpreted from the perspective of different types of legitimacy. The revolutionary strategy used propagandistic legislation, written in the language of lay people, which urged them to act according to the new law. It can be seen as a request for acts of the people to legitimize the soviets. On the contrary, the traditional strategy employed old bureaucratic means of writing and distributing legislation to the local soviets. The language used by this strategy was closed to the understanding of a lay audience and implied traditions of obeying the law written in familiar legal language, which in turn implied rational/legal legitimacy. The second strategy had already become dominant after the first months of the Bolshevik revolution. This observation demonstrates that from the very beginning of their rule, Soviet leaders approached legislative policy from a technocratic point of view, which determined the further development of Soviet legal theory and practice.
«Фауст» Гёте и теоретики ГАХН
Доброхотов А. Л. Философия и исследования культуры. WP20. Высшая школа экономики, 2012. № 01.
Феномен унификации в истории
Edited by: Е. Н. Кириллова М.: ИВИ РАН, 2019.
«Грубейшая брань», или Отрицательные рецензии на истории Казанского университета в Российской империи
Морозов О. В. В кн.: Научное рецензирование в гуманитарных дисциплинах: жанр, исследования, тексты. М.: Издательский дом НИУ ВШЭ, 2020. С. 72-89.
Прошлое для настоящего: история-память и нарративы национальной идентичности
Васильев А. Г., Высокова В. В., Заиченко О. В. и др. М.: Аквилон, 2020.

Based on the authentic ego-documents, the monograph reconstructs the lifeworld of a Party journalist Michail Danilkin who belonged to the first Soviet generation. The book reconstructs his genealogy, the images of post-war reality, the notions of the Soviet and anti-Soviet, the inner threats for socialism. The backbone of his picture of the world was the figure of Stalin. The book lays particular emphasis on Danilkin’s politically oriented practices which resulted in his conviction in March 1953 under section 10 of article 58 of the RSFSR Penal Code (counter-revolutionary propaganda and agitation). The authors assume that Michail Danilkin’s opinions and actions, notwithstanding their particularity, were nevertheless aligned with the mentality of Party members who worked in the system of Agitprop.
The book is designed for students and professors of humanities, as well as for all interested in the life of people under Stalin.

Encyclopedic article about sociology as  a science, its object, history, subject matters, contemporary state and perspectives.

Russia, the Council of Europe, and “Ruxit,” or Why Non-Democratic Illiberal Regimes Join International Organizations
Busygina I., Kahn J. Problems of Post-Communism. 2019. Vol. 66. No. 2. P. 1-38.

Russian membership in the Council of Europe is a function of two threats: isolation internationally and too much democratization/liberalization domestically. These concerns conditioned Russia’s halcyon first decade of membership. Looking forward, however, the obligations of membership challenge Vladimir Putin’s limited interest in further domestic reforms at a time when international isolation bothers him less. The authors argue that understanding these varying domestic and international pressures is a good predictor of Russia’s membership interests. The authors explore general hypotheses from this case study about the conditions under which illiberal regimes willingly cede sovereignty in order to join more liberal and democratic international organizations.

Philosophy of the history of Nikolai Berdyaev – one of the main dimensions of his philosophy free spirit. Exactly in stories of the spirit for Berdyaev finds and unfolds its own true reality and creative power, that is freedom.