A course book in academic English for pre-service teachers 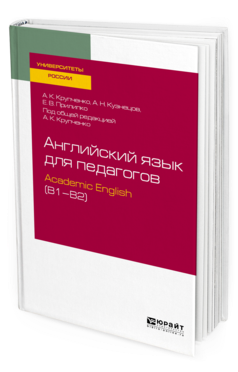 The present article looks at the professional and communicative competence of language teachers as integral part of their communicative competence which comprises the discourse both inside and outside of the classroom. The survey of 700 ESL-teachers in Russia and Great Britain shows that assessing L2 written works and commenting on them are amongst the most important  communicative tasks in their professional life. Therefore, a set of exercises has been designed to prepare pre-service language teachers to respond to their students’ writing, and use written corrective feedback as a tool to facilitate and enhance students’ learning.

An accreditation system and professional standards of pedagogical departments are considered, as well as some innovations in teacher training in the USA. The experience of American higher education institutions is analyzed with regard to main guidelines of the pedagogical education potential reform in Russia.

This is a case of trilateral partnership to establish a service-learning program for teacher education students.

The report gives a brief overview of the biggest challenges that teachers of English phonetics face nowadays and outlines some solutions that have been brought about by recent cutting-edge research in the field. The English language is a global phenomenon of the modern world, and this is why many such solutions are technology-driven, whereas the researchers hail from all over the world. The crucial task to deal with is raising awareness of the importance of phonetics as the cornerstone of all language learning and motivating people to study it, which could also increase the number of young researchers pushing the theory of phonetics forward and thus improving its practical teaching.

The book includes proceedings of the 11th LATEUM (the Linguistic Association of the Teachers of English at the University of Moscow) International Conference - ELT and Linguistics 2013: New Strategies for Better Solutions. The conference focused on the current issues of teaching English as a foreign language and a range of its linguistic aspects, including Cognitive and Corpus-Based Discourse Studies in ELT, Teaching and Researching Business English, Literature and Translation, Media Discourse, Phonetics in ELT in Global English Context, Culture-Specific Component in Language Teaching and Research, Technology-Assisted Linguistic Research and Instruction, Language Testing and Assessment.