The research rationale is justified by the current changes in the labor market, such as high labor mobility and implementation of new human resources strategies by the majority of companies. Non-standard employment contracts change the nature of the employment relationships between the employee and the employer. These tendencies are also embodied in the event industry, where the function of human resources management is particularly crucial due to the specifics of the industry. The organizational structure of the event company should have an ability to change rapidly in accordance with the short-term fluctuations in the labor demand. Temporary employment is of great interest for both practitioners and academics: experts believe that flexible labor relations can be associated with a number of management problems. The aim of the article is to study the flexible forms of employment in the event industry. Various theories, including Ch. Handy and D. Atkinson theoretical frameworks, are used in the article to describe principles of work of flexible organizational forms. Empirical data was collected in 2017 from 38 institutions that are involved in the organization of cultural events in St. Petersburg.

the paper is dedicated to estimation of what influence on the project development does contest victory have. The data collected from different ecosystems is being compared. It is shown that contest usefulness, estimated by the winner projects management is also different in different ecosystems. 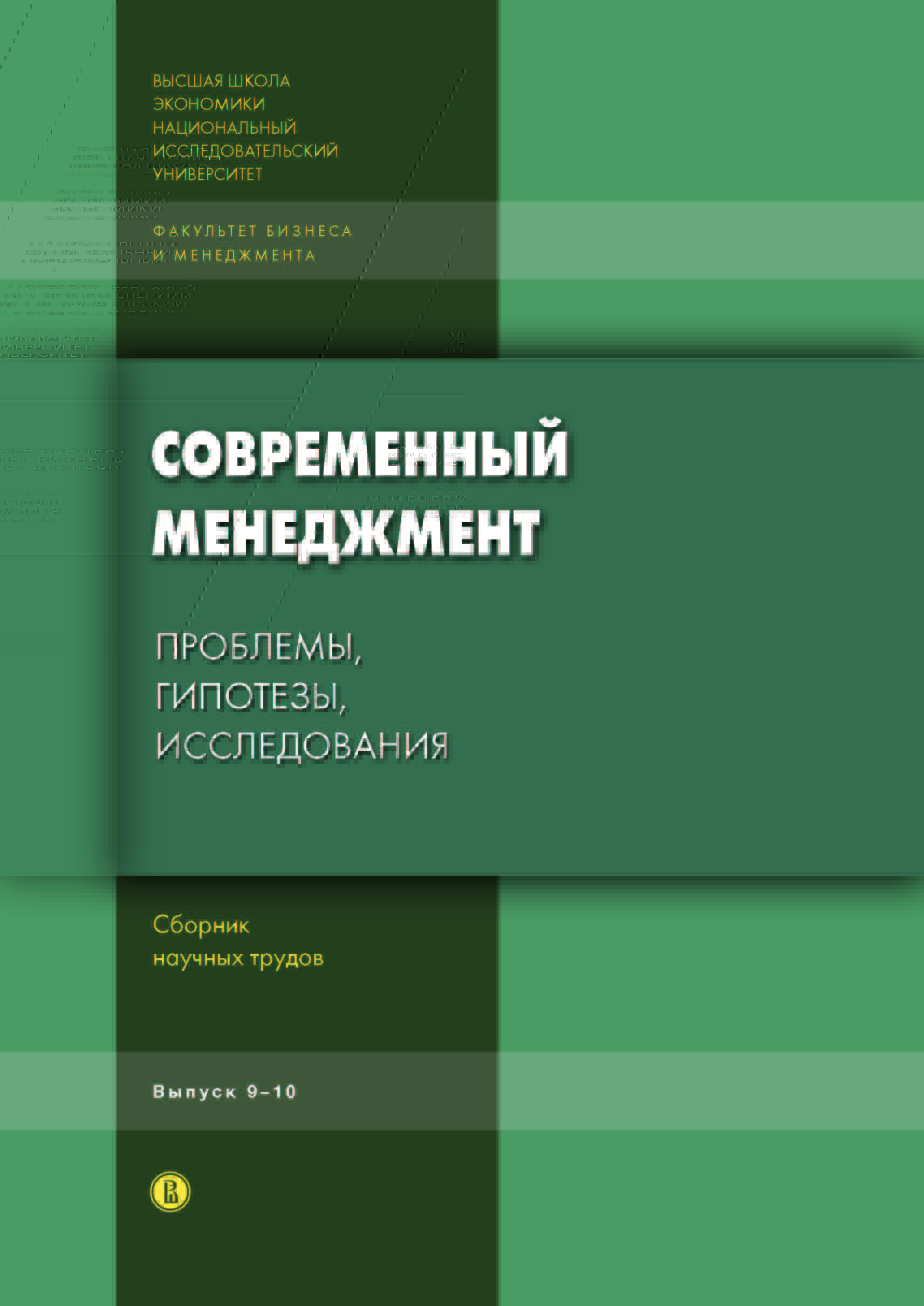 Подходы к определению стратегии
Назарова В. В. Дискуссия теоретиков и практиков. 2010. № 3. С. 33-38.
Современный менеджмент: проблемы, гипотезы, исследования : сборник научных трудов
Вып. 1. М.: Издательский дом ГУ-ВШЭ, 2009.
Is Education a Signal on the Russian Labour Market?
Aistov A. Education. EDU. Высшая школа экономики, 2012. No. 5.
This research focuses on estimating the signalling role of education on the Russian labour market. Two well-known screening hypotheses are initially considered. According to first of these, education is an ideal filter of persons with low productivity: education does not increase the productivity of a person, but it does give him the possibility to signal about his innate productivity via an educational certicate. The second of these hypotheses admits that productivity actually does increase during the period of study, but nevertheless the main objective of getting an education is to acquire a signal about one's productivity. Information theory suggests that employees use education signals during the hiring processes whereby employers screen potential employees. Employers and other categories of self-employed workers are usually not screened by the labour market via their educational attainments. Comparison of the returns to education of employees vs. self-employed workers could show the difference between the returns to signals and the returns to human capital. Yet another way to understand the signals is to consider the time dynamics of the returns to education for employees staying in the same firm. This helps us to answer the question about whether the signals are valuable only during the hiring process, or whether they remain valuable during the whole experience with the firm. This research is based on the Mincerian-type earnings functions, estimated on RLMS-HSE and NOBUS data. On the basis of the available information, we cannot say that the returns to signals and human capital differ significantly in Russia. Nevertheless we can say that, for the majority of men, the return to educational signals decreases with time spent in the same firm, while we observe the opposite for women.
Международные институты в глобальной архитектуре содействия развитию
Зайцев Ю. К., Перфильева О. В., Рахмангулов М. Р. и др. М.: Издательский дом НИУ ВШЭ, 2011.
Teacher Characteristics and Student Achievements in TIMSS. Findings gained from applying the "first-difference" method to TIMSS-2007 data
Khavenson T., Tyumeneva Y. A. Education. EDU. Высшая школа экономики, 2012. No. 06.
The advantage of Trends in International Mathematics and Science Study is that not only does it perform a direct cognitive assessment of students concerning these students' teachers, but also their education, work experience and the instructional strategies used in their classes. In order to estimate teachers’ characteristics effects on a student’s achievements and overcome the limits of the TIMSS' correlational design, we have employed the first-difference method. Teachers’ characteristics effects have also been measured with the usual regression method. The effects discovered varied from one subject field to another, and there has been a difference between the results gained by using the firstdifference method and OLS regression analysis model. The first-difference method has revealed a negative effect of reproductive tasks and group work in math class, whereas comprehension tasks and tasks for developing meta-cognitive skills have shown a positive effect. On the contrary, reproductive tasks for science classes have had a positive effect while comprehension tasks and tasks for developing meta-cognitive skills have had either none or negative effects. Apart from this, a teacher's experience has had a significant effect on natural science subjects as opposed to mathematics. The possible interpretations of these results are discussed in this paper
Political Geography and Foreign Direct Investment
Betschinger M. Исследования по экономике и финансам. WP9. Высшая школа экономики, 2012. No. 2,4.
.
Анализ показателей портовой деятельности
Федоренко А. И., Зеленов Н. Н. Логистика сегодня. 2010. № 5. С. 296-311.