The analysis presented of non-axisymmetrically deformed shells behaviour reveals
the variety of shell features affecting not only critical loads but also postbuckling
behaviour and structural workability as well. These features are profoundly con-nected, not with load and structural irregularities, but with properties of nonlinear
solutions inherent to thin shells.
Non-axisymmetric deformation of shells demonstrates significant subcritical
deflections and the possibility of smooth transformations (rearrangements) of
shapes (due to the existence of ‘‘energetically close’’ postcritical shapes) and
following rapid development up to a limit point.
Perturbations of load and structure manifest themselves diversely. If a pertur-bation induces shapes mismatching any of the postcritical ones (those produced by
primary, secondary, or tertiary bifurcation paths), a certain drop of critical load
may occur but the general branching pattern remains unchanged. If the defor-mation shape induced by a perturbation is similar to any postcritical one, reso-nance occurs, the bifurcation pattern of postcritical branches is disrupted, and the
critical load drops significantly. In that case the structure is maximally sensitive to
perturbation value.
Perturbations of initially nonhomogeneous stress–strain states are generally
insignificant due to already developed strong nonuniformity. An ideal bifurcation
pattern is disrupted in the case of a continuous spectrum of perturbation or in
presence of its harmonics resonant to postcritical shapes. If the subcritical and
postcritical shapes are similar, then the sensitivity to any perturbation is minimal.
Thus, the load-carrying capability of compressed shells developing non-axi-symmetric deformation is not directly determined by critical loads. Additional
criteria of stress, strain and displacement limitation may be considered. On the
other hand, local buckling may not affect the load-carrying capability in the case of
existence of an adjacent ascending branch of a solution.

For multilayer structures, such perturbations as shell wall delamination may
cause local buckling such as snap-off of a delaminated layer, i.e. a jump to an
isolated branch of the solution. The existence domain of such a buckling form is
determined by the size of the delaminated area only. This phenomenon illustrates
the existence of general, local and mixed buckling modes with essentially different
levels of critical loads; occurrence of some specific modes depends upon the type
and value of perturbation. 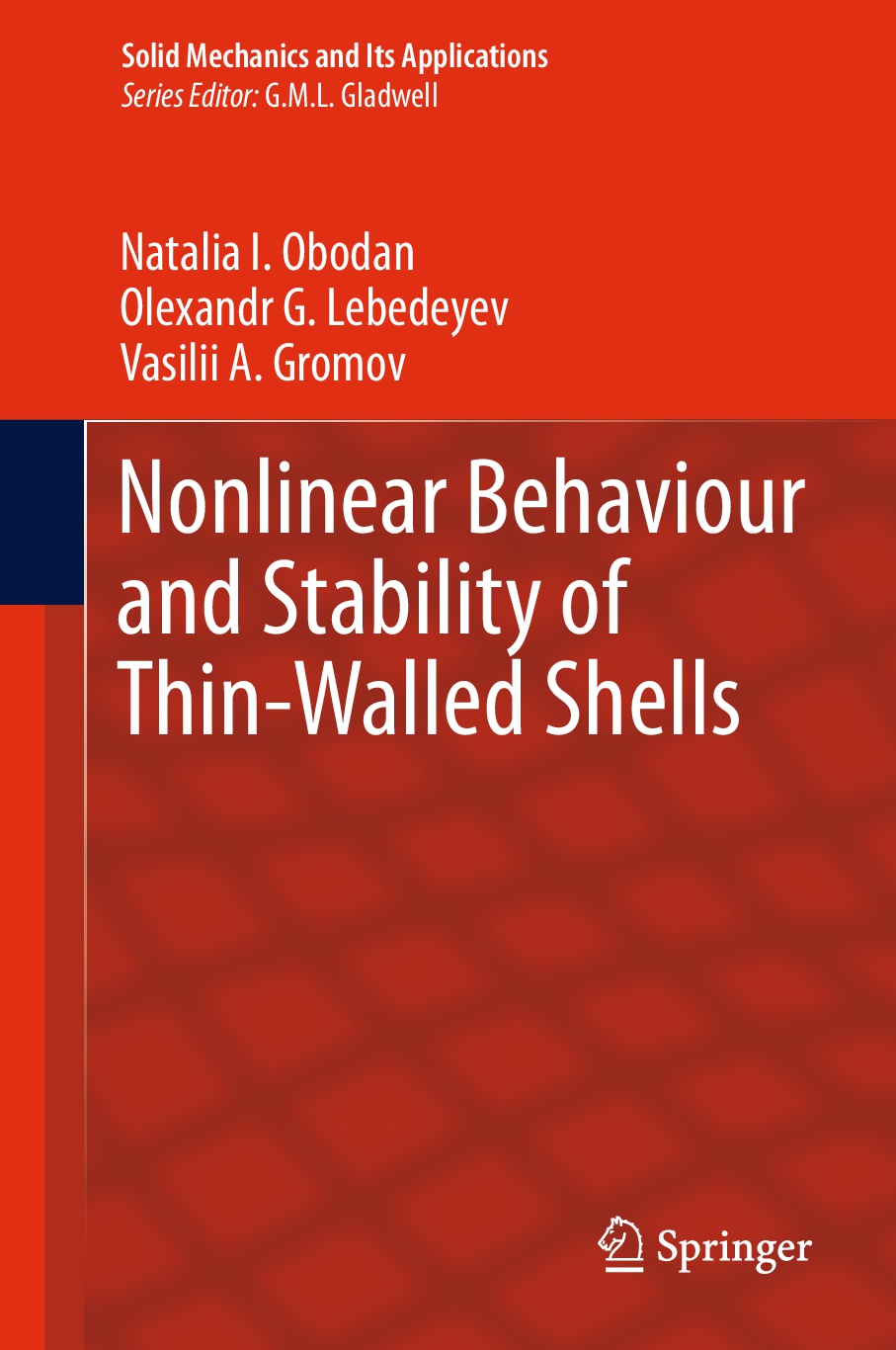 The complete bifurcation structure for cylindrical panel under uniform pressure.

That is a sound basis to determine the worst shape imperfection.

The extended Kantorovich method to construct the complete bifurcation structures.

The chapter presents novel approaches to predict and control buckling of thin-walled structures; mathematically, these approaches are formalized as the first and second inverse bifurcation problems for von Karman equations. Both approaches are based upon the method employed to solve the direct bifurcation problem for the equations in question. The approach considered was applied to several difficult problems of actual practice, viz., for the first inverse problem, to the problems of optimal thickness distribution and optimal external pressure distribution for a cylindrical shell, optimal curvature for a cylindrical panel as well; for the second inverse problem, to the problem to predict buckling of a cylindrical shell under an external pressure.

The problem to identify pre-buckling states for thin-walled shell corresponds to the problem to identify pre-bifurcation solutions (the inverse bifurcation problem) for von Karman equations that govern the structure. Typical solution sequences similar to those of post-bifurcation solutions observed along the bifurcation paths of the nonlinear boundary problem for von Karman equations are extracted to serve as precursors of bifurcation (tools to solve the problem). The method allows one to divide all operations required to solve the problem under study into two non-equal parts. The most time-consuming part (to trace bifurcation paths and cluster the respective solution) is performed off-line, while the part of the algorithm that is carried out on-line (the identification algorithm) requires a relatively small number of arithmetic operations. This allows development of the efficient system of rapid identification of pre-buckling states.