Logic deals with the fundamental notions of truth and falsity. Modal logic arose from the philosophical study of “modes of truth” with the two most common modes being “necessarily true” and “possibly true”. Research in modal logic now spans the spectrum from philosophy, computer science and mathematics using techniques from relational structures, universal algebra, topology, and proof theory.

These proceedings record the papers presented at the 2016 conference on Advances in Modal Logic, a biennial conference series with an aim to report on important new developments in pure and applied modal logic. As indicated above, there are new developments in using modal logic to reason about obligations, about programs, about time, about combinations of modal logics and even about negation itself. 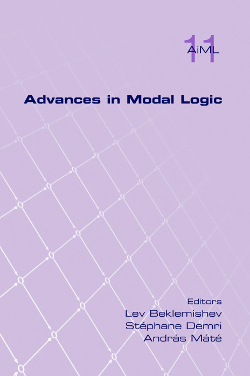 A grammar logic refers to an extension of the multi-modal logic K in which the modal axioms are generated from a formal grammar. We consider a proof theory, in nested sequent calculus, of grammar logics with converse, i.e., every modal operator [a] comes with a converse [¯a]. Extending previous works on nested sequent systems for tense logics, we show all grammar logics (with or without converse) can be formalised in nested sequent calculi, where the axioms are internalised in the calculi as structural rules. Syntactic cut-elimination for these calculi is proved using a procedure similar to that for display logics. If the grammar is context-free, then one can get rid of all structural rules, in favor of deep inference and additional propagation rules. We give a novel semi-decision procedure for context-free grammar logics, using nested sequent calculus with deep inference, and show that, in the case where the given context-free grammar is regular, this procedure terminates. Unlike all other existing decision procedures for regular grammar logics in the literature, our procedure does not assume that a finite state automaton encoding the axioms is given

Logic deals with the fundamental notions of truth and falsity. Modal logic arose from the philosophical study of “modes of truth” with the two most common modes being “necessarily true” and “possibly true”. Nowadays modal logic is used to reason about knowledge, about obligations, about programs and about time, among others. Actual research in modal logic spans philosophy, computer science and mathematics using techniques from relational structures, universal algebra, topology, and proof theory. These proceedings record the papers presented at the 2020 conference on Advances in Modal Logic, a biennial conference series with an aim to report on important new developments in pure and applied modal logic. The topics include decidability and complexity results, proof theory, model theory, interpolation, related problems in algebraic logic, as well as history of modal reasoning.

Charles Peirce’s notation in the gamma part of his graphical

calculi for normal modal logics are developed based on a refo

rmulation of the graphical calculus

i are of the nature of deep inference. The

i for modal logics is shown by translations

between graphs and modal formulas.

Logic deals with the fundamental notions of truth and falsity. Modal logic arose from the philosophical study of “modes of truth” with the two most common modes being “necessarily true” and “possibly true”. Research in modal logic now spans philosophy, computer science, and mathematics, using techniques from relational structures, universal algebra, topology, and proof theory.

These proceedings record the papers presented at the 2018 conference on Advances in Modal Logic, a biennial conference series with the aim of reporting important new developments in pure and applied modal logic. The topics include decidability and complexity results, proof theory, model theory, interpolation, as well as other related problems in algebraic logic.

We describe Peirce’s 1903 system of modal gamma graphs, its transformation rules of inference, and the interpretation of the broken-cut modal operator. We show that Peirce proposed the normality rule in his gamma system. We then show how various normal modal logics arise from Peirce’s assumptions concerning the broken-cut notation. By developing an algebraic semantics we establish the completeness of fifteen modal logics of gamma graphs. We show that, besides logical necessity and possibility, Peirce proposed an epistemic interpretation of the broken-cut modality, and that he was led to analyze constructions of knowledge in the style of epistemic logic.