The textbook has passed practical tests and written on the basis of the readable authors for many years. Presented in textbook materials give students orientation in the solution of many practical problems in a number of areas, constitute the initial level to obtain a broader and deeper education in the field of probability theory. The book provides an overview of the theory of stochastic processes, detailed material on the theory of Markov processes with discrete time (Markov chains) and continuous-time. In addition to the solved problems for each Chapter of the textbook suggested problems to solve and theoretical questions to test the quality of the learning material. 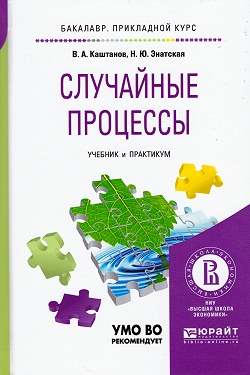 This book presents a systematic exposition of the modern theory of Gaussian measures. The basic properties of finite and infinite dimensional Gaussian distributions, including their linear and nonlinear transformations, are discussed. The book is intended for graduate students and researchers in probability theory, mathematical statistics, functional analysis, and mathematical physics. It contains a lot of examples and exercises. The bibliography contains 844 items; the detailed bibliographical comments and subject index are included.

The aim of this work is to analyze a circle of questions related to the notion of  recurrence in general general Markov chains. Being well known in two very different  subfields of random systems: lattice random walks and ergodic theory of continuous  selfmaps, the recurrence property is next to being neglected in general theory of  Markov chains (perhaps except for a few notable exceptions which we will discuss in detail).

Вычисление энтропии скрытой марковской цепи с одним "немарковским" состоянием
Бежаева З. И., Оселедец В. И. Обозрение прикладной и промышленной математики. 2011. Т. 18. № 4. С. 622-623.
Uniform integrability for strong ratio limit theorems
Shur M. G. Theory of Probability and Its Applications. 2013. Vol. 57. No. 4. P. 659-662.
On properties of the Wang-Landau algorithm
Shchur L. math. arxive. Cornell University, 2018. No. 1808.09251.
We review recent advances in the analysis of the Wang--Landau algorithm, which is designed for the direct Monte Carlo estimation of the density of states (DOS). In the case of a discrete energy spectrum, we present an approach based on introducing the transition matrix in the energy space (TMES). The TMES fully describes a random walk in the energy space biased with the Wang-Landau probability. Properties of the TMES can explain some features of the Wang-Landau algorithm, for example, the flatness of the histogram. We show that the Wang--Landau probability with the true DOS generates a Markov process in the energy space and the inverse spectral gap of the TMES can estimate the mixing time of this Markov process. We argue that an efficient implementation of the Wang-Landau algorithm consists of two simulation stages: the original Wang-Landau procedure for the first stage and a 1/t modification for the second stage. The mixing time determines the characteristic time for convergence to the true DOS in the second simulation stage. The parameter of the convergence of the estimated DOS to the true DOS is the difference of the largest TMES eigenvalue from unity. The characteristic time of the first stage is the tunneling time, i.e., the time needed for the system to visit all energy levels.
Local limit theorems for Markov chains with trend component of linear growth
Konakov V., Markova A. arxiv.org. math. Cornell University, 2014. No. 1412.1607v1.
We consider a sequence of Markov chains weakly convergent to a diffusion. We suppose that a drift term contains a linearly increasing component. The usual parametrix method fails because of this unbounded drift term. We show how to modify the parametrix method to obtain local theorems for this case.
Markov Chains in Modelling of the Russian Financial Market
Bautin G. A., Kalyagin V. A. In bk.: Financial Decision Making Using Computational Intelligence. Iss. 70. NY; Heidelberg; Dordrecht; L.: Springer, 2012. P. 233-251.
We use a Markov chains models for the analysis of Russian stock market. First problem studied in the paper is the multiperiod portfolio optimization. We show that known approaches applied for the Russian stock market produce the phenomena of non stability and propose a new methods in order to smooth it. The second problem addressed in the paper is a structural changes on the Russian stock market after the financial crisis of 2008.We propose a hidden Markov chains model to analyse a structural changes and apply it for the Russian stock market.
Non-ergodicity and non-Markovianity of some simple traffic flow models
Blank M. In bk.: . P. 269-272.

The celebrated Nagel–Schreckenberg model allows to study a reasonably  large class of one-dimensional traffic flow models with parallel updates. Unfortunately further generalizations of this construction turn out to be not especially fruitful. Namely, numerical simulations of such  generalizations did not demonstrate stable behavior qualitatively  different from the original model, and more to the point their  mathematical treatment is still not available even up to nowadays.  I'll discuss several features of these models which partially explain  the failure of both numerical and mathematical attempts to study  generalizations of the Nagel–Schreckenberg model.

Введение в математическую статистику
Ивченко Г. И., Медведев Ю. И. М.: ЛКИ, 2010.
Stability of densities for perturbed Diffusions and Markov Chains
Konakov V., Kozhina A., Menozzi S. math. arxive. Cornell University, 2016. No. 1506.08758v2.
We are interested in studying the sensitivity of diffusion processes or their approximations by Markov Chains with respect to a perturbation of the coefficients. As an important application, we give a first order expansion for the difference of the densities of a diffusion with H¨older coefficients and its approximation by the Euler scheme.
Model for organizing cargo transportation with an initial station of departure and a final station of cargo distribution
Khachatryan N., Akopov A. S. Business Informatics. 2017. No. 1(39). P. 25-35.