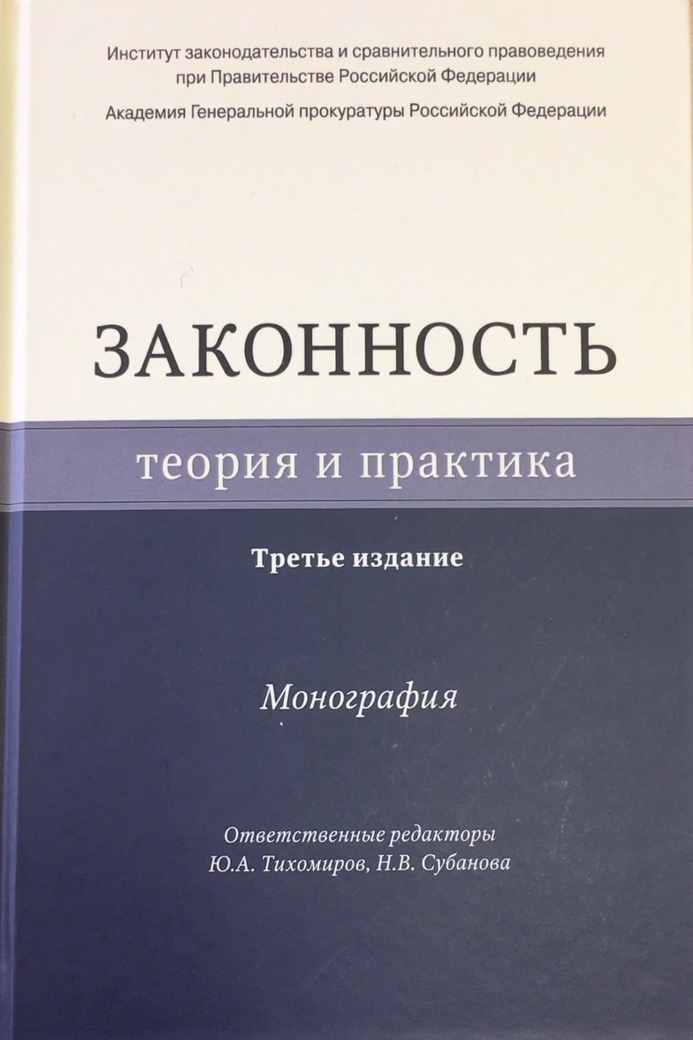 Similar publications
AML/CFT and Anti-Corruption Compliance Regulation: Two Parallel Roads?
Eduard Ivanov. IACA Research Paper Series. IACA Research Paper Series. International Anti-Corruption Academy (IACA), 2018. No. 02.
The paper presents a comparative legal study of compliance regulation in the areas of AML/CFT and anti-corruption. The main question is whether existing expirience of AML/CFT complaince regulation can/should be considered in the anti-corruption field. The author identifies distinctive features of two different approaches to regulation and the challenges arizing from these, and then analyzes the role of international soft law, national laws and regulations, and compliance programmes of multinational companies.
The Legitimacy of the Bolshevik Order, 1917-1918: Language Usage in Revolutionary Russian Law
Borisova T. Y. Law. LAW. Высшая школа экономики, 2012. No. 05.
The article describes and analyzes the legislative politics of revolutionary regimes in Russia in 1917-1918. The author aims to demonstrate the political meaning of the form of early Soviet legislation and its legitimizing effect. The revolutionary legislators often used specific language in the new laws as a vehicle of legitimacy, i.e. to make the people comply. The two main types of legal language used by the Bolsheviks can be interpreted from the perspective of different types of legitimacy. The revolutionary strategy used propagandistic legislation, written in the language of lay people, which urged them to act according to the new law. It can be seen as a request for acts of the people to legitimize the soviets. On the contrary, the traditional strategy employed old bureaucratic means of writing and distributing legislation to the local soviets. The language used by this strategy was closed to the understanding of a lay audience and implied traditions of obeying the law written in familiar legal language, which in turn implied rational/legal legitimacy. The second strategy had already become dominant after the first months of the Bolshevik revolution. This observation demonstrates that from the very beginning of their rule, Soviet leaders approached legislative policy from a technocratic point of view, which determined the further development of Soviet legal theory and practice.
State and Legal Practice in the Caucasus. Anthropological Perspectives on Law and Politics
Edited by: S. Voell, I. Kaliszewska. Ashgate, 2015.

The book contains articles written for the international conference  "Legal Aspects of the BRICS", held 6-8 May 2013 at the University of "Tor Vergata" (Rome). They are grouped into the following sections: Legal basis BRICS: International law and Roman law; environment and sustainable development; trade: international contracts and contemporary  legal systems; energy and legal instruments.  Articles are devoted to actual problems of the functioning of the BRICS and cooperation of BRICS countries.

The author analize implementation of the OECD Convention on Combating Bribery of Foreign Public Officials in International Business Transactions of 1977 in the United Kingdom and in the United States. Special attention paid to the influence of the Convention on the  development of anti-corruption compliance control in companies, to the liability for corruption offenses and application of the UK and the US anti-corruption law to foreign companies.

States may stipulate laws and rules, specifying conditions for foreigners to be admitted to another state's territory. Tightening requirements and making new restrictions for people who are going to visit a foreign country are one of efficient tools of foreign policy. International law has no norms obliging states to motivate the denial for a foreigner's admission into a foreign territory. The state cannot deny the admission for a foreigner if it contradicts obligations of the state implied in agreements concluded between the state of residence and an international intergovernmental organisation or in the treaties on privileges and immunities of international organisations.

The article covers principal provisions of the UN Convention on Contracts for the International Carriage of Goods Wholly or Partly by Sea. The study focuses on the specifics of acting legal regimes of liability for failing to preserve goods under carriage by sea and shows the necessity to make a uniform legal regulation. The article also shows wide boundaries for applying the new Convention compared to the apllicable one and the liability kept by the carrier for failing to preserve goods and for delaying its delivery. The difference has been given between negotiable and non-negotiable transport documents, and an electronic transport record has been described as an alternative to a «hard copy» document. The article is also supplied with considering issues of period of time for suit, jurisdiction, and arbitration.