The Politics of Commercial Treaties in the Eighteenth Century. Balance of Power, Balance of Trade. Ed. A. Alimento, K. Stapelbroek. Palgrave Macmillan. 2017.

This book is the first study that analyses bilateral commercial treaties as instruments of peace and trade comparatively and over time. The work focuses on commercial treaties as an index of the challenges of eighteenth-century European politics, shaping a new understanding of these challenges and of how they were confronted at the time in theory and diplomatic practice. From the middle of the seventeenth century to the time of the Napoleonic wars bilateral commercial treaties were concluded not only at the end of large-scale wars accompanying peace settlements, but also independently with the aim to prevent or contain war through controlling the balance of trade between states. Commercial treaties were also understood by major political writers across Europe as practical manifestations of the wider intellectual problem of devising a system of interstate trade in which the principles of reciprocity and equality were combined to produce sustainable peaceful economic development. 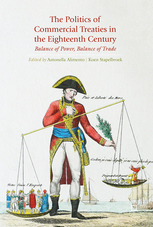 Similar publications
Paleoconservatism of the Southern Agrarians
Belkovich R. Law. LAW. Высшая школа экономики, 2013
The emergence of the Tea Party movement in recent years has shown that under the surface of mainstream political life in the USA there exists a different layer of ideas, which cannot be satisfactorily described in terms of the Republican/Democrat dichotomy. These ideas have their origins in the foundation of the American Republic, which owes a lot to ancient and mediaeval political theory. In the twentieth century there was a revival of these ideas in the form of the so-called “paleoconservative” movements which rediscovered their ancient and mediaeval heritage. This paper focuses on one of them, the Southern Agrarian movement, as exemplary of this radical intellectual project.
Fear and Uncertainty in Europe: The Return to Realism?
Edited by: R. Belloni, V. Della Sala, P. Viotti. Palgrave Macmillan, 2019.

The book undertakes to assess whether political realism as an International Relations theory still helps us to understand the foreign policies of key European actors. The contributors ask whether foreign policy actors in Europe understand the international system and behave as realists. They ask what drives their behaviour, how they construct material capabilities and to what extent they see material power as the means to ensure survival in a post-Cold War context apparently marked by growing instability. The contributors use or contest realism in its different forms in order identify continuity or change in the foreign policy of key European actors.

‘The relations of the Republic of Venice and the Marquises d’Este in the mid-fourteenth to mid-fifteenth century based on the lettere ducali from the Western European section of the Historical Archive of the Saint Petersburg Institute of History of the Russian Academy of Sciences.’
Khvalkov E., Чиркова А. В., Агеева Д. А. Humanities. HUM. Basic Research Programme, 2018
The present study is devoted to the research into a set of the Venetian lettere ducali to the Marquises d’Este of the fourteenth and fifteenth centuries collected by N.P. Likhachev (1862-1936), Member of the Academy of Sciences of the USSR, stored in the Western European section of the Saint Petersburg Institute of History of the Russian Academy of Sciences and the preparation of their full-text critical publication. The lettere ducali are an excellent source to study the Serenissima and its continental and overseas domains. The source material of the Venetian lettere ducali have long and not without reason been considered and actively investigated by researchers as one of the most important sources on the economic, social, political, legal, environmental, cultural, and ethnic history of Venice. In addition, Venetian sources often provide researchers with important material on the history of other states of the Italian Peninsula, including, in our case, the domains of d’Este. This explains the exceptional importance of studying lettere ducali as the most important source on the history of the Western European Middle Ages and early modern times. This study revealed historical material on the specific cities and regions of Italy (Venice, Treviso, Ferrara, Verona, Padua, the Po Delta), as well as the Venetian colonies in the Mediterranean (Crete, Cyprus) and the Adriatic (Shkodra, Dalmatian Coast), history of international relations, history of economic relations, history of everyday life, history of state institutions and international law, history of a medieval document, history of Latin writing.
Catherine II de Russie – Friedrich Melchior Grimm. Une correspondance privée, artistique et politique au siècle des Lumières.
Sergueï Karp. Vol. I: 1764-1778. Ferney-Voltaire: Centre international d'étude du XVIIIe siècle, 2016.

The report “Russia and the World: 2021. Annual Forecast: Economy and Foreign Policy” continues the series of yearly publications of the Primakov National Research Institute of World Economy and International Relations (IMEMO) and Foundation for Prospective Studies and Initiatives. It consists of two parts: “Economy” and “Foreign Policy”. Part I focuses upon Russian foreign trade-economic relations and analysis and forecast of the world (Russia, Europe, the USA, Japan, India) economic trends in 2020- 2021, including international financial markets and main Russian export markets. The report is based on the decades long IMEMO experience in forecast research. Part II presents the forecast of international relations for 2021, it analyzes main challenges for Russia and options to respond them.

According to the current concept of foreign policy of the Russian Federation, soft power should take an important place in the foreign policy strategy of the Russian Federation. Meanwhile, at the present stage, thinking, both Russian political circles that adopt foreign policy decisions, and the Russian expert-scientific community's views on the soft influence in international relations, contain a number of conceptual flaws. These flaws do not allow an objective and relevant analysis of the possibility and prospects for the soft influence of the Russian Federation on the international arena. Proceeding from this, the article offers a genealogical analysis of the two most successful forms of soft influence - "soft power", which is a significant tool for pursuing US foreign policy and the "normative force of Europe," in which most of the foreign policy directions of the European Union are implemented. The analysis proposed in the article allows, firstly, identify the conceptual structure of both studied forms of soft power, and secondly, to compare these structures, which allows us to affirm the fundamental, quality genealogical uniqueness of each of the two forms of soft power in contemporary international relations. In addition, the analysis allows for a more conceptual approach to the problem of the possibility of Russia's soft influence, as well as to abandon the popular research focus on financing the soft influence of one or another participant in international relations.

Rising Powers in the Contemporary World: Sources of Sustainability
Busygina I. In bk.: Vocabularies of International Relations after the Crisis in Ukraine. L.: Routledge, 2016. Ch. 6. P. 90-110.

The conflict in Ukraine and Russia's annexation of Crimea has undoubtedly been a pivotal moment for policy makers and military planners in Europe and beyond. Many analysts see an unexpected character in the conflict and expect negative reverberations and a long-lasting period of turbulence and uncertainty, the de-legitimation of international institutions and a declining role for global norms and rules. Did these events bring substantial correctives and modifications to the extant conceptualization of International Relations? Does the conflict significantly alter previous assumptions and foster a new academic vocabulary, or, does it confirm the validity of well-established schools of thought in international relations? Has the crisis in Ukraine confirmed the vitality and academic vigour of conventional concepts?

relations of Russia, China and the Pacific states of Latin America. Author focuses

the reform of the economic and institutional order in the Asia-Pacific. The relevance

emerged in the Asia-Pacific region. This crisis manifests itself in two aspects. First,

and ideas for their further development. Such a complex agenda is shaped by Russia

and China in relation to Eurasia (the concept of “Greater Eurasia”), but the promotion

of a similar agenda in the APEC faces many contradictions. Second, the Asia-Pacific

region is becoming an area of confrontation between the United States and China,

order in the region. The Pacific countries of Latin America were

not affected by either the Russian or Chinese mega-initiatives of recent years, which

are aimed precisely at creating a new international order. Meanwhile, these countries

are APEC members and participants in many regional initiatives, as well as potentially

significant economic partners for both Russia and China. Moreover, the author believes

in America to the development of multilateral institutions of the regional order. However,

the historically established institutional and political linkage of these countries to

the United States currently determines their support for American initiatives. This provision,

however, is not a given, and some irregularity of the American regional policy under

even more in demand. The author considers the proposed analysis