Sociology in Austria since 1945

Sociology in Austria has been frequently affected by political developments in the country. This first history of sociology in Austria examines the impact of the break-up of the Habsburg Empire and of two consecutive dictatorships, which destroyed academic freedom by means of forced migration and imprisonment. Even after 1945 the re-established Second Republic did not dismiss professors promoted during the Nazi period, and failed to invite exiled academics to return home. The author argues that the result has been a continuation of favouritism and conformism, with compliance to political regimes sanctioned at the expense of meritocracy and that in the light of this chequered past we should celebrate instances of de-institutionalization. 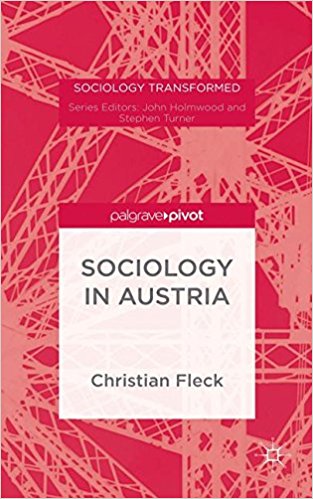 Similar publications
Исследования Новосибирской социологической школы: от истоков до наших дней
Бессонова О. Э., Калугина З., Богомолова Т. Ю. и др. Регион: Экономика и Социология. 1997. № 4. С. 3-17.
The History of Sociological Research on Occupations and Professions in the USSR 1960-80s: Ideological Frameworks and Analytical Resources
Abramov R. Social Science Research Network. Social Science Research Network. SSRN, 2014. No. 40.
The article analyzes of the content and context of research on occupations and professions in Soviet sociology from 1960 to the 1980s. It describes the key topics of observations of professional groups, gives definitions of occupations and professions in Soviet social sciences, and analyzes ideological and censorship restrictions for research and publishing. Sociology of occupations and professions as a separate disciplinary field appeared in Russia only in the late 1990s. Before this time, these topics were integrated into social structure and social stratification observations, research of the working class, intelligentsia, industrial sociology and sociology of organizations. From the 1960s Soviet sociologists searched for new explanatory models and they decided that socio-professional groups were the best criterion for a Soviet social structure description. During 1970-80s researchers of Soviet social structures debated about the place of professional groups. This article analyzes these and other features of sociology of occupations and professions in the USSR. The analysis is based on the bibliographical observations and interviews with Soviet sociologists. This project was supported by Science Foundation of NRU HSE.
Расширяющееся пространство борьбы: стратегии создания учебных планов по социологии в российских региональных университетах
Шпаковская Л. Л., Чернова Ж. В. В кн.: Социология вчера, сегодня, завтра. V Социологические чтения памяти Валерия Борисовича Голофаста. СПб.: Эйдос, 2012. С. 556-574.
The history of the Austrian commercial colleges from their foundation as independent educational institutes to full integration into public administration (1850s-1950s)
Thurner T. Entreprises et histoire. 2012. Vol. 65. No. 4. P. 986-1011.
After the revolutionary years of 1848-1849, the bourgeoisie was ready to become the leading economic power in the Habsburg Empire. The newly granted economic liberty requested young people well trained to manage the new ventures. To meet these requirements, private initiatives founded and financed the first commercial colleges, based upon liberal ideas and driven by excellence in teaching. At the end of World War I, when times got difficult and the schools suffered heavy losses in their economic base, the schools requested to become fully integrated into public administration. This step proved fatal when the national socialists gained power in 1938 and the schools became a tool in the abolishment of liberalism – the very idea on which the schools were founded.
Новосибирская Экономико-социологическая Школа
Бессонова О. Э., Шабанова М. А. Социологические исследования. 2000. № 8. С. 79-88.
Социологический ежегодник, 2012: Сб. науч. тр.
Edited by: Н. Е. Покровский М.: ИНИОН РАН, 2013.

The revelation that the U.S. Department of Defense had hired anthropologists for its Human Terrain System project—assisting its operations in Afghanistan and Iraq—caused an uproar that has obscured the participation of sociologists in similar Pentagon-funded projects. As the contributors to Sociology and Empire show, such affiliations are not new. Sociologists have been active as advisers, theorists, and analysts of Western imperialism for more than a century.

The collection has a threefold agenda: to trace an intellectual history of sociology as it pertains to empire; to offer empirical studies based around colonies and empires, both past and present; and to provide a theoretical basis for future sociological analyses that may take empire more fully into account. In the 1940s, the British Colonial Office began employing sociologists in its African colonies. In Nazi Germany, sociologists played a leading role in organizing the occupation of Eastern Europe. In the United States, sociology contributed to modernization theory, which served as an informal blueprint for the postwar American empire. This comprehensive anthology critiques sociology's disciplinary engagement with colonialism in varied settings while also highlighting the lasting contributions that sociologists have made to the theory and history of imperialism.

Russian Liberalism and the Problem of Imperial Diversity
Semyonov A. In bk.: Liberal Imperialism in Europe. Basingstoke: Palgrave Macmillan, 2012. P. 67-89.