The chapter is about benefits in the social security system.

The chapter is devoted to the compensation for harm caused to the employee by injury or other damage to health associated with the job duties.

Rehabilitation services for people with disabilities are analyzed.

The chapter is about state social assistance.

The significance of medical care and treatment in social security law is analysed. 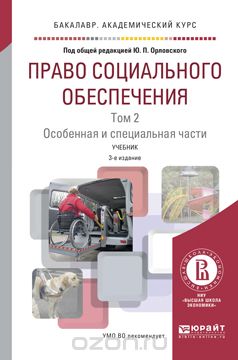 Free education, public heath care and social benefits that had been a fact of life for decades in the Soviet Union have now become an object of deep nostalgia for many people, especially the elderly. Social services enveloped Soviet society, controlling the activity and thoughts of people for more than 70 years. The state and its various agents carried out this double-faced task of care and control at all levels of social life, moving gradually from tough and selective schemes of social security and insurance to the “bright future” of a communist welfare state. The development of Soviet social policy followed the ideological formulae common in many industrial countries during the modernisation period. Our aim in this study was to use the forms taken by everyday life and the modern subject in the Soviet Union as a way to call into question our own certainty about how these phenomena work. Social care and social control practices were carried out by different professional and quasi-professional assistants—educators in youth and children’s cultural centres and clubs, activists in women’s organisations and trade unions, teachers at schools and educators in kindergartens and orphanages, nurses and visiting nurses at polyclinics, and officials of domestic affairs departments. The population viewed the government and its agents as the source of both well-being and trouble. This article focuses on social policy during the first decades of the “Republic of Labour” when the ideology of care and control was established in accordance with the demands of industrial growth, formulating particular definitions of normality and deviance. In this quest for normality, classifications of worthy and unworthy behaviour and activities were established, and the rhetoric distinguishing “us” and “them” intensified. We show how egalitarian social and democratic principles existed alongside conservative stratification guidelines without contradiction, and how the rhetoric of social care varied dramatically from its practical implementation.

The book is prepared by a group of leading russian and finnish experts on the field of labor law and social security law, and includes research of the most important  problems and issues of the protection of social and labor rights in Russia and Finland. The book is also published in Finnish. The book will be usefull for academics, lecterures, magisters, post-graduate students, students of law faculties, trade union activists, stuff of the personnel daepartments and all interested in comparative labor law.