by year
Subject
News
Surviving on Zoom: How Teachers Have Adapted to Online Education
Teaching is a stressful job, and with schools and universities operating remotely over the last eighteen months, teachers’ worries have increased dramatically. In the latest in a series of articles on distance learning, IQ.HSE reports on research conducted by the HSE University Institute of Education on how teachers have been coping with stress.
Life in Russia According to Surveys
Free education and social security appear to be more important for Russians than the freedom of expression or the freedom of movement. The majority of Russians, especially younger people, look to the state for assistance and choose responsible consumption merely as a way to save money. IQ.HSE selected nine facts about various aspects of people's lives based on findings from a nationwide representative survey conducted by the HSE Centre for Studies of Civil Society and Nonprofit Sector as part of the Monitoring of the Status of Civil Society project.
Meditation Has Greater Benefits for Intrinsically Motivated People with High Self-Control
HSE University researchers Evgeny Osin and Irina Turilina conducted an intervention study looking into the effectiveness of a short-term online mindfulness meditation course. They discovered that even after a three-week course of daily 10 to 15-minute meditation sessions, novice participants benefitted from improved emotional wellbeing, concentration, motivation and self-reflection. The practitioners were also less likely to fixate on negative thoughts. However, these effects only applied to people who already had sufficiently high levels of self-control and motivation to meditate and were thus less likely to give up on the practice. The research is presented in an article published in Applied Psychology: Health and Well-Being
Publications 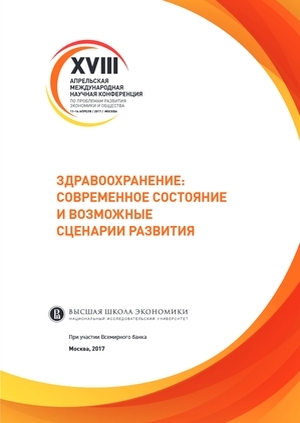 Медицина и право в ХХI веке: Материалы научно-практической конференции
Вып. 2. СПб.: Издательский дом СПбГУ, 2011.
Расширение потребительского выбора в здравоохранении: насколько оправданны ожидания?
Шейман И. М. Экономическая политика. 2011. № 4. С. 107-127.
Имитационное моделирование социальной сферы: информационно-аналитическая система социально-экономического развития территорий (модельный комплекс "Социальная сфера")
Лычкина Н. Н., Морозова Ю. А. Берлин: LAP LAMBERT Academic Publishing, 2011.
Improving Child Nutrition Outcomes in India: Can the Integrated Child Development Service Be More Effective?
Das Gupta M., Gragnolati M., Lokshin M. et al. Policy Research Working Paper. WPS. World Bank Group, 2005. No. 3647.
Levels of child malnutrition in India fell only slowly during the 1990s, despite significant economic growth and large public spending on the Integrated Child Development Services (ICDS) program, of which the major component is supplementary feeding for malnourished children. To unravel this puzzle, the authors assess the program's placement and its outcomes using National Family Health Survey data from 1992 and 1998. They find that program placement is clearly regressive across states. The states with the greatest need for the program - the poor northern states with high levels of child malnutrition and nearly half of India's population - have the lowest program coverage and the lowest budgetary allocations from the central government. Program placement within a state is more progressive: poorer and larger villages have a higher probability of having an ICDS center, as do those with other development programs or community associations. The authors also find little evidence of program impact on child nutrition status in villages with ICDS centers.
Реализация нового закона об обязательном медицинском страховании на региональном и муниципальном уровнях
Тукаева А. Р. В кн.: Государственное управление в XXI веке: традиции и инновации. 9-я Международная конференция (25-27 мая 2011 г.). Ч. 2. М.: Издательство Московского университета, 2011. С. 66-72.
Patient Mobility, Health Care Quality, Welfare And Regulation
Karpov A. V. Economics/EC. WP BRP. Высшая школа экономики, 2014. No. 64.
This paper justifies unequal health care quality in a model with two regions and patients differentiated by location and quality perception. Efficient distribution with unequal healthcare quality arises when there are low travel and/or quality provision costs. If costs are sufficiently low, then both regions win from inequality. Lump-sum transfers and price regulatory policies restore an efficient solution.
Соплатежи в здравоохранении — перспективы введения
Гурова А. А., Зарочинцева И. В., Чагаева Т. В. В кн.: Россия 2030 глазами молодых ученых. Сборник материалов III Всероссийской научно-практической конференции. М.: Научный эксперт, 2011. С. 204-209.
Бесплатное здравоохранение: реальность и перспективы
Шишкин С. В. Журнал исследований социальной политики. 2003. Т. 1. № 1. С. 107-127.
Тенденции и факторы занятости в российском здравоохранении
Колосницына М. Г., Мущинкин А. В. В кн.: Модернизация экономики и глобализация: В 3 кн. Кн. 2. Кн. 2. М.: Издательский дом ГУ-ВШЭ, 2009. С. 189-197.
Мониторинг хода реализации Федерального закона от 08.05.2010 № 83-ФЗ в части формирования перечней услуг (работ), оказываемых (выполняемых) государственными учреждениями субъектов Российской Федерации
Алашкевич М. Ю., Зеленский В. А., Богданов Л. Н. и др. М.: Издательский дом НИУ ВШЭ, 2012.
Poverty and Economic Growth in Egypt, 1995–2000
El laithy H., Lokshin M., Benerji A. Policy Research Working Paper. WPS. World Bank Group, 2003. No. 3068.
After a decade of slow economic growth Egypt's rate of growth recovered in the late 1990s, averaging more than five percent a year. But the effect of this growth on poverty patterns has not been systematically examined using consistent, comparable household datasets. In this paper, the authors use the rich set of unit-level data from the most recent Egyptian household surveys (1995-96 and 1999-2000) to assess changes in poverty and inequality between 1995 and 2000. Their analysis is based on household-specific poverty lines that account for the differences in regional prices, as well as differences in the consumption preferences and size and age composition of poor households. The results show that average household expenditures rose in the second half of the 1990s and the poverty rate fell from 20 percent to less than 17 percent. But, in addition to the ongoing divide in the urban-rural standard of living, a new geographical/regional divide emerged in the late 1990s. Poverty was found predominantly among less-educated individuals, particularly those working in agriculture and construction, and among seasonal and occasional workers. These groups could suffer the most from the slowing economic growth evident after 1999-2000.
From salary to the performance-based remuneration of russian physicians: how motivation at work is changing.2018. - 25 с.
Shishkin S., Temnitsky A. Public and Social Policy. WP BRP Series. НИУ ВШЭ, 2017
The paper examines the changes in the physician’s motivation at work during the period of reforms the salary system started since 2008. These reforms have included a shift from fixed salary system to pay for performance remuneration as well as sufficient increase of salary. The data of six surveys of health workers implemented in 2007-2016 were used to reveal the hierarchy of physician’s motives at work and to track their changes during the period of time under consideration. The changes were minor, and the directions of these changes were rather opposite to the expected strengthening of financial motivation at work: the importance of the motive of earning money has moved from the first place. The share of doctors willing to work more and better on the condition of linking salary with labor contribution did not increase. In contrast, almost two-thirds of physicians believe that they are working on a high level of quality and performance. The majority of physicians desire to increase not a stimulating part of the salary but a base, fixed one. Doctors who receive bonuses for the intensity, quality and performance, and who have a higher amount of salary wish to see the share of fixed part of salary higher than it is now available. This is a clear indication of orientation of this professional to strengthening the protective function of the salary rather than to use increased opportunities for earning money.
Studies in Big Data
Vol. 65: Data Management and Analysis. Switzerland: Springer, 2019.