The book discusses a little-studied aspect of the history of the Russian émigré Eurasianist movement of the 1920s and 1930s: namely, an attempt to develop holistic “Eurasianist” jurisprudence and political theory. The task proved to be much
more complex than merely applying Eurasianist ideology to the field of law, as the latter was not a single phenomenon, and had different institutional and especially conceptual dimensions. Eurasianists themselves differed in
their approaches to law and state. These distinctions were based on metalegal grounds, whether in phenomenological sources of the works of Nikolai Alekseev, who argued for legal individualism, or alleinheit theory in the writings of Leo
Karsavin, or positivist theory informing the approach by Nikolai Dunaev. Based on Eurasianists’ published works and unpublished archival materials, this book argues for the fundamentally contradictory legal and political views by
members of the Eurasianist movement. These contradictions suggest that it was impossible to create a particular “Eurasianist” legal and political theory on the basis of their writings. 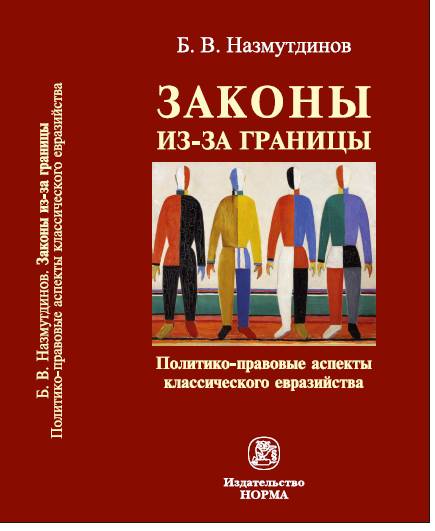 Similar publications
The Concept of Law: a brief introduction to jural aspects of Classical Eurasianism
Nazmutdinov B. Law. LAW. Высшая школа экономики, 2015. No.  61.
Jurists and historians have rarely highlightened jural aspects of classical Russian Eurasianism. There have been several attempts to describe Eurasianist jural philosophy as a coherent system, but they were not fully relevant to the source material. The paper focuses on problems in the background of the creation of holistic Eurasianist jurisprudence during 1920s and 1930s. It emphasizes that the complexity of this process depended on different institutional and especially conceptual terms. The Eurasianists displayed several different approaches to Law whose distinctions were based on metajuridical grounds – phenomenological ideas in the work of Nickolai Alekseev, who argued for legal individualism; the “Alleinheit” theory found in the writings of Lev Karsavin; and a positivist theory in paper by Nickolai Dunaev. Based on published works of Eurasianists and unpublished archival materials, this research concludes that these juridical views were contradictory. These contradictions meant it was impossible to create a coherent Eurasianist jural theory using the terms derived from the authors mentioned, despite the fact that Eurasianist views have some specific characteristics.
Два величайших русских философа права: Борис Чичерин и Владимир Соловьев
Гурвич Г. Д. Известия высших учебных заведений. Правоведение. 2005. № 4. С. 138-164.

If a power wishes to subdue a region, what can it do? Order its armies to annex it? Carve up the region into parts that are subsequently ruled by different great powers, or create new principalities as a tool for indirect power influence? Why not use ideology and economic strength to rule that same region instead?  The volume demonstrates how the European powers of the 16 th - 19 th centuries oscillate between these different stances in their attitude towards the Balkans, at the same time leaving enough space for the smaller regional players - states and individuals alike - to exercise their local power and influence.

The concept of legal structure is important for the commucative legal theories, because it helps to find out basic elements in Law, which cannot be reformed intentionally by governmental activity. The paper focuses on the model of legal structure in the writings of Russian legal scholar Nicholas Alexeyev (1879–1964), which affected the communicative theory of Andrei Polyakov. The article analyses structural method in the Eurasianist writings, “legal structure” in the legacy of Alexeyev and the development of this concept in the context of Russian Eurasianism during 1920s and 1930s. The transpositive “legal structure” reveals new sides in prism of views on the Eurasia’s uniqueness.

Alexeyev, who turned to the Eurasianism in 1926th is not Eurasianist sensu stricto. However, the “spaceness” of this “structure” is similar to Eurasinist views on Russia-Eurasia as a specific place. Eurasianists also favoured Alexeyev’s rejection of reduction of Law to other basis. They denied the attempts to reduce Eurasia to Europe or Asia; Alexeyev did the similar things according to Law; he refused the reduction of Law to “sovereign’s command”, “form of freedom” or “social experience”. These similarities could be explained by the closeness between Eurasianist protostructuralism and phenomenological method of Alexeyev. This closeness influenced the development of Alexeyev’s legal views in frames of the Eurasian movement.

This paper is divided into three parts: it first gives an historical analysis of the legal concept of 'no man's land' (in Latin: terra nullius) and its role in legal and theological controversies surrounding the colonisation of the Americas. It then goes on to show how these Hispanic debates form the basis for Locke's views in the matter. Finally, it addresses the question to which extent Locke's erroneous presumptions still shape contemporary legal discourse. To this end, the 1992 landmark decision of the Australian High Court in Mabo v Queensland is analysed in depth. Even though the court was right in rescinding the concept of terra nullius, the judges were insufficiently aware of its colonial roots.

The collection of papers presents an overview of the study of the analytic legal philosophy in Russia.