L. : Routledge, 2017.
Editor-in-chief: A. Mustajoki, K. Lehtisaari
Compiler: A. Mustajoki, K. Lehtisaari
Chapters
Universities for Modernising Russia
Zaretsky Y., , in : Philosophical and Cultural Interpretations of Russian Modernisation. : L. : Routledge, 2017. Ch. 7. P. 89-101.
The chapter aims at giving historical perspective for the current university reforms in Russia by tracing the policies of the Russian State towards universities on different stages of Russian modernisation. It approaches ‘Russian modernisation’ as a series of multidimensional transformations of the Russian society through the last three centuries. Despite of being dissimilar in their ...
Soviet modernisation and its legacies from the perspective of civilisational analysis
Maslovskiy M., , in : Philosophical and Cultural Interpretations of Russian Modernisation. : L. : Routledge, 2017. P. 32-43.
In the chapter the multiple modernities perspective is considered in the context of civilisational analysis in historical sociology. Johann Arnason's study of the Soviet modernisation is discussed. It is argued that Arnason's approach can also be applied to post-Soviet Russian transfromations. The legacies of Soviet modernity are considered on the basis of studies of political culture ...
Cultural barriers of the Russian modernisation
Lebedeva N., , in : Philosophical and Cultural Interpretations of Russian Modernisation. : L. : Routledge, 2017. Ch. 10. P. 136-148.
In this chapter the cultural barriers of Russian modernisation and their consequences for the national development are analyzed. It starts from the necessity of consideration of cultural specifics when planning the social and cultural change in non-Western countries. The human-centered criteria for evaluation of culture and the concept of the cultural verticality-horizontality, based on the ...
Research target: Philosophy, Ethics, and Religious Studies Sociology (including Demography and Anthropology History and Archeology Political Science, International Relations, and Public Administration Education
Priority areas: sociology humanitarian
Language: English
Full text
Text on another site
Keywords: modernisationtypology of philosophical and political conceptsThe history of Russian state building
Publication based on the results of:
Забытые историки, забытая история: Био-библиографическое исследование (2015) 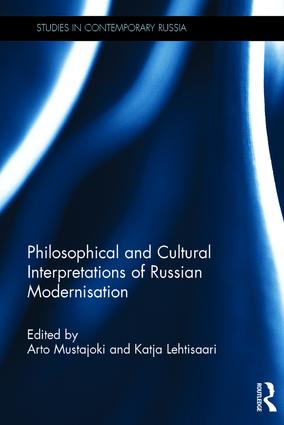