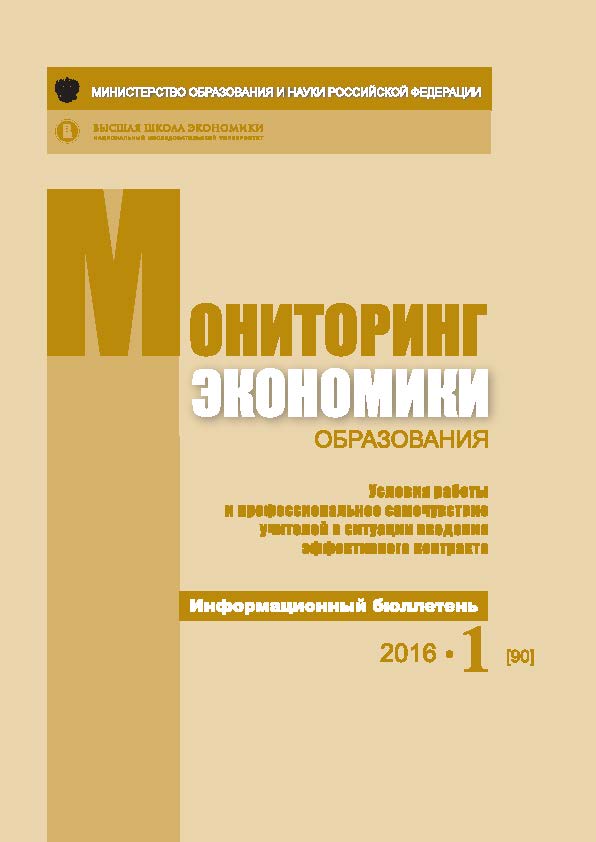 Similar publications
Where is a Teacher Happy in Russia? Indicators of Teachers’ Salaries
Derkachev P. Public Administration. PA. Высшая школа экономики, 2015. No. WP BRP 28/PA/2015.
This article considers the uneven positions of school teachers in different regions of the Russian Federation. There exist numerous research works on the relation of school teachers’ salaries to the characteristics of regional educational systems and regional economies. A range of indicators is used to calculate school teachers’ salaries. It is necessary to consider the ratio of the teachers’ salary to the average salary in the region, the latter serving as a target indicator in government programs, in combination with other indicators, such as the ratio of the salary to the price of a fixed set of goods and services and the ratio of the teachers’ salary fund to total regional government expenditures. Research based on cluster data analysis statistical methods allowed the author to distinguish four types of regions. We used official data provided by Russian Federal State Statistics Service and the Russian Federal Treasury. The recommendations developed for each cluster of regions seek to improve the efficiency of the steps aimed at the implementation of the educational policy tasks through differentiating the support measures by the federal government
Спрос на высшее образование
Савицкая Е. В. В кн.: Становление информационной экономики: теория и практика. Сб. научн. трудов. СПб.: Издательство Нестор-История, 2006. С. 76-80.
The Implementation of Performance-Related Pay in Collaboration with Employers: The Cases of Two Russian Vocational Schools
Karmaeva N., Rodina N. V. Education. EDU. Высшая школа экономики, 2019. No. 55.
Vocational schools are involved in partnerships with employers to generate extra resources and in the implementation of high-stake accountability reforms in Russia. We examine school capacity in the top-down implementation of performance-related pay (PRP) in Russia. We consider two cases of collaboration between schools and local employers that are either highly or loosely integrated with different companies. We elaborate the understanding of the resource and productivity dimensions of school capacity embedded within the broader context of schools’ formal and informal ties. The findings indicate tensions that emerge in the implementation of a system of rewards with regard to the within schools’ trust and the trust developed with their partners and funders, educational goals, work arrangements, and the distribution of school finances generated in partnerships. These issues can be negotiated with local industrial partners at multiple levels.
Эффективный контракт - основа результативного обучения
Гурьянова С. Ю. Качество. Инновации. Образование. 2013. Т. 99. № 8. С. 10-16.