In this textbook the materials directed on theoretical and practical development of the course "Rhetoric" are collected. Problems of a course: to give an idea of a subject, the main categories and concepts rhetoricians, its cultural and historical genesis and a place in system of forms of the verbal cultures and also to consider factors on which the success of speech interaction with audience depends (in situations of business communication). Conforms to actual requirements of the Federal state educational standard of the higher education. For the students who are trained on the specialties "Marketing", "Management" "Journalism", "Public relations", "Political science", "Sociology", and also a wide range of the readers who are interested in regularities of the effective business communications. 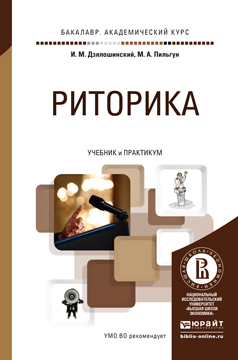 Being a representative of the integrationist approach to the problem of discrimination in the USA, Martin Luther King, Jr. made a number of powerful speeches in front of the African American audience. In them he often alluded to the Bible and Christianity in general as there he found numerous examples of humility and atonement. So this was what M.L.King urged Americans to.

Free Speech in Plato’s Gorgias
Gloukhov A. Humanities. HUM. Basic Research Programme, 2016. No. WP BRP 121/HUM/2016.
As this new reading of Plato’s Gorgias shows, four distinct positions with regard to freedom of speech are introduced in this classical text on the relations between philosophy and rhetoric: two realistic and two logical. The realism of rhetoric poses the key political problem of incommensurability between freedom and justice. The realism of philosophy is able to solve this problem, but only through a mediatory differentiation of two purely logical stands, which might have found direct counterparts in the two dominant forms of political philosophy in the 20th century. One of them is political liberalism, which corresponds to the ‘geometric’ way of argumentation in ‘Gorgias’ and inevitably passes into a theory of normative justice. Another is the mainstream ‘continental’ philosophy, which corresponds to the ‘erotic’ way of argumentation in Gorgias and explores the possibilities of the positive freedom.
Некромантия Сократа? Ψυχαγωγία в «Федре» Платона
Прокопов К. Е. Платоновские исследования. 2017. Т. 7. № 2. С. 33-54.

Rhetoric is one of the key themes of Plato’s Phaedrus. In the second part of the dialogue Socrates refers to rhetoric as psychagogy (soul-leading). The notion of psychagogia initially designated the process of conjuring souls from the Underworld to the world of the living. Outside the magical context psychagogy could refer to a set of poetical and rhetorical devices necessary for persuading an audience. This paper deals with a number of texts exemplifying various aspects of psychagogy in antiquity: psychagogy as a necromantic ritual in tragedy; the description of the power of logos in ritual terms by Gorgias in the Encomium of Helen; rhetorical psychagogy in Isocrates and Aristotle; psychagogy in the Timaeus and the Laws; the image of Socrates as psychagogos (soul-leader) in Aristophanes’ Birds. This analysis yields a nuanced understanding of the term in Plato’s Phaedrus, and enables us to provide an interpretion of the whole dialogue as an example of psychagogy. By transposing the notion of psychagogy from the ritual realm to the philosophical, Plato reestablishes its meaning as the practice of soul-leading in the soul’s ascent to truth.

The article investigates the textualization of the categories “Us” and “Them” in American presidential rhetoric in two interrelated ways: as an inventory of lexicogrammatical resources specific to this genre and their contextualized use as a tool for legitimizing political decisions. To this purpose, several speeches by Donald Trump and George W. Bush have been analyzed. Methodologically the study draws on the discourse analytical toolkit which involves exploring evaluative labels for category members, as well as metaphors, leitmotifs (or topoi), and syllogisms. These various language resources are not treated separately but rather as making up two distinct discourse strategies.

The analysis shows that one pervasive discourse strategy in the sample is the strategy of out-casting the “evil other”. The primary means of out-casting and populating this category is negative evaluative lexis, which is extensively used for naming and identifying the members of the “evil” out-group. Another persistent exponent of this strategy is a set of leitmotifs, which are used to attribute certain qualities and features to out-group members and characterize their actions. The most salient leitmotifs in rhetoric of both presidents are threat and killing the innocent, which are very frequent in any references to terrorists, who are the core members of the out-group. It is worth noting that the usage of these linguistic resources is very consistent within this genre of presidential rhetoric irrespective of who the rhetor is and the specific historical context.

Further analysis of the sample shows that out-casting is inextricably linked to another pervasive discourse strategy: legitimation of going to or continuing the war in a given country. For Trump, it is primarily the military campaign in Afghanistan, while for Bush the target country was primarily Iraq. In both cases the legitimation of the contradictory move seems to hinge largely on whether the country in question can be convincingly placed into the “Them” category. Linguistically, the most popular way to do so is through the leitmotif of “safe haven”, which is used to indicate that a certain country houses, supports, and is, indeed, a safe haven for terrorists. Interestingly, the category seems to be structured as a fuzzy set, with the inclusion into the outgroup being, as it were, a matter of degree. Thus, in Trump’s speech Pakistan is construed as a member of the outgroup only to some extent, which translates into less strict measures directed against it. At the core of legitimation strategy is argumentation that relies on syllogisms. The assumed major premises of syllogisms used by both presidents are very similar, which makes them a type of leitmotifs. These leitmotifs are arguably also part of the genre’s inventory of rhetorical resources albeit the ones that are never expressed in the surface structure and have no language associated with them.

This overview of social constructionism begins with a consideration of the influential work of Malcolm Spector and John I. Kitsuse, whose book, “Constructing Social Problems”, inspired a wide variety of studies addressing how social problems are “constructed”. Ensuing epistemological and methodological controversies are discussed, and three key scholarly works are reviewed for the insights they offer into exemplary analytic practice in a constructionist vein. The exemplars pivot around the notion that “understanding understandings” is essential to executing constructionist analysis and does not entail subscribing to reified conceptions of objective conditions. The chapter concludes by discussing three promising directions for extending the constructionist purview, namely, through the study of (1) cyberspace (including social media) as an emerging but essential venue for the construction of social problems; (2) claims-making in national contexts beyond the Anglo Global North, especially in countries that challenge the liberal democratic assumptions upon which constructionist scholarship usually rests; and (3) a broadened, more quotidian conception of the social spaces and forms through which social problems-related expression is advanced.

This book brings together academics and practitioners from a range of disciplines from more than twenty countries to reflect on the growing importance of transparency, power and control in our international community and how these concerns and ideas have been examined, used and interpreted in a range of national and international contexts. Contributors explore these issues from a range of overlapping concerns and perspectives, such as semiotic, sociolinguistic, psychological, philosophical, and visual in diverse socio-political, administrative, institutional, as well as legal contexts.

The collection examines the ways in which 'actors' in our society - legislators, politicians, activists, and artists - have provoked public discourses to confront these issues.

The paper considers testimonies of academic curriculum of Joseph Jamnicki, one of the most known teachers of Novgorod seminary in 1740s. The paper makes documents, which were found in libraries, museums and archives of Saint-Petersburg, Ryazan, Pskov, Yaroslavl, Kyiv, Minsk accessible for a wide circle of scholars. These documents, which are partly autographs of Jamnicki, have to do with his studies in Kyiv-Mohyla academy and with his teaching in Novgorod seminary. Two kinds of sources are considered in the paper. First are manuscripts of courses of rhetoric, philosophy and theology, which were taken/taught by Jamnicki. Second are office documents: lists of students, correspondence with the Novgorod bishop. These documents give evidence both of work of Jamnicki as an academic manager (prefect and rector), and of his pedagogical occupations: control of records of students, choice of manuals and sources for courses of lectures. Integrated study of sources, which we could find, permits to reconstruct curriculum of Jamnicki from 1738 to 1748.

The article deals with articulations of philosophical and literary dimensions in Plato. He was very early defined as the paragon of both philosopher and writer, and praised and criticized by both philosophers and philologists. A long philosophical tradition blamed him for excessive artistry and beauty. But it is obvious that we owe the perfect state of manuscripts of dialogues, as well as their vitality and viability, to their literary qualities.

The book is a study of the academic public presentation and its prosodic aspect.