The future landscape of the micro-nano-electronics will essentially contain extremely
miniaturized fully depleted devices such as planar SOI or narrow FinFETs and nanowires.
These aspects were covered in both ULIS and EuroSOI conferences, leading to significant
overlap. In order to further increase audience and scientific impact, the two sister
conferences have decided to merge in 2015.

Universal SPICE model for submicron SOI/SOS MOSFETs based on BSIMSOI and EKV-SOI platforms with account for total ionizing dose-induced effects (TID), pulsed radiation effects, single events is presented. A special subcircuit consisting of parasitic transistors for sidewall and backgate leakage currents and other elements is connected to the standard SPICE model. In addition, the radiation-dependent parameters are described by physically based mathematical equations. Model parameter extraction methodology is described. Examples of radhard SOI/SOS CMOS circuits simulation are presented. 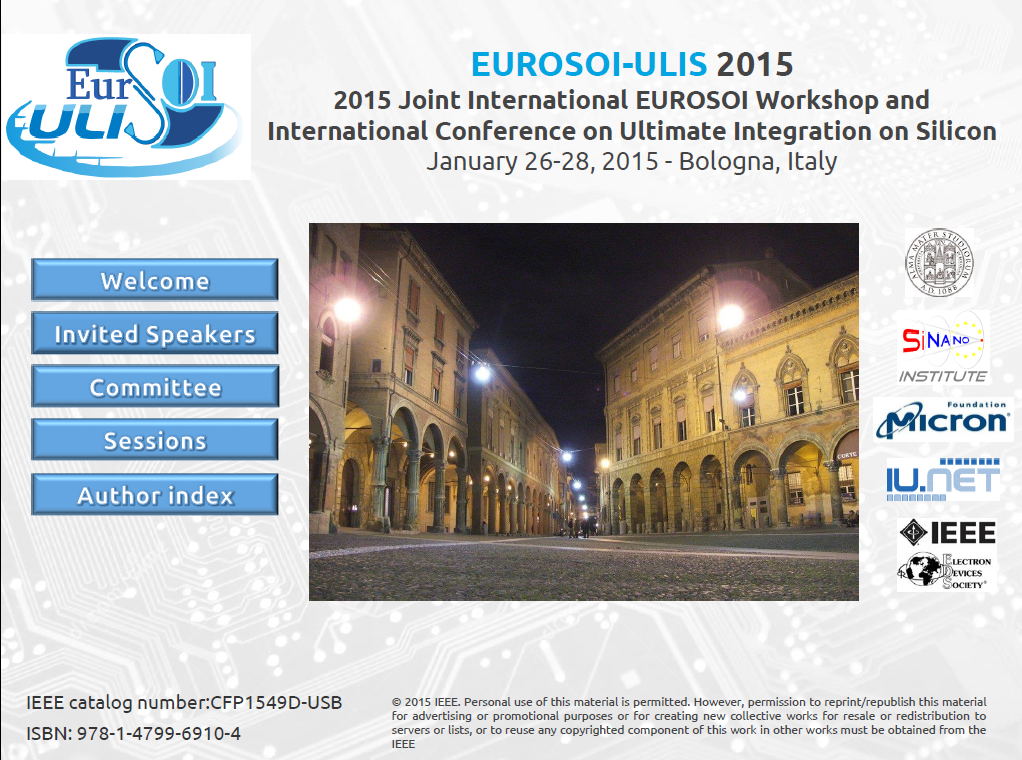 We have employed noise thermometry for investigations of thermal relaxation between the electrons and the substrate in nanowires patterned from 40-nm-thick titanium film on top of silicon wafers covered by a native oxide. By controlling the electronic temperature Te by Joule heating at the base temperature of a dilution refrigerator, we probe the electron–phonon coupling and the thermal boundary resistance at temperatures Te = 0.5–3 K. Using a regular T 5-dependent electron–phonon coupling of clean metals and a T 4-dependent interfacial heat flow, we deduce a small contribution for the direct energy transfer from the titanium electrons to the substrate phonons due to inelastic electron-boundary scattering.

The Book of Abstracts contains the abstracts of the papers presented at the biannual International Conference “Micro- and Nanoelectronics – 2016” (ICMNE-2016) including the extended Session “Quantum Informatics” (QI-2016). The Conference topics cover the most of the areas dedicated to the physics of integrated micro- and nanoelectronic devices and related micro- and nanotechnologies. The Conference is focused on recent progress in those areas. It continues the series of the AllRussian Conferences (since 1994) and the International Conferences (since 2003).

In this paper, we do an early study of circuit parameter variation for temperature-resistant SOI CMOS production technology on the examples of several standard circuit fragments. Circuits electrical characteristics are simulated at several values of temperature (in the range +27…+300 °C) and with account for MOSFET parameter mismatch figures derived from measurement data. The method involving a library of corner models provides a reasonable estimate of circuits behavior scatter due to the simultaneous influence of very high temperature and production process variability.

International Conference on Micro- and Nano-Electronics 2016

At ultralow temperatures (T< 100 mK) rather small external disturbance might lead to a noticeable overheating. While electron transport measurements the inevitable external EM noise, picked-up and transmitted through electric wires, results in a mismatch between the electron Te and the phonon Tphtemperatures P~W(Te^5-Tph^5), where P is the power dissipated at the sample with volume W. Hence, for sufficiently small nanoelectronic systems the effect might be clearly pronounced. Multiple methods have been suggested to reduce the undesired electron heating. Typically various RF filters are used to cut the impact of noisy EM environment. Often the supporting amplitude vs. frequency data are obtained only at room temperatures analyzing the impact of 'isolated' elements without taking into consideration the wires. Here we describe the custom made multistage RLC filtering system for ultralow temperature nanoelectronic experiments. The amplitude vs. frequency characteristics were measured down to very low temperatures. Distributed elements theory analysis supports experimental data.

Using a universal approach, SPICE models were developed for sub-100 nm MOSFET structures taking into account radiation and low-temperature effects, as well as a procedure for identifying model parameters based on the results of a full-scale/machine experiment. The approach consists of a combination of macromodeling based on the standard model from the SPICE simulator and the introduction of additional analytical functions for radiation- / temperature-dependent parameters. The capabilities of the developed SPICE models and the procedure for identifying parameters are illustrated by examples of simulation of the IV‑curves of sub-100 nm MOSFETs.

The current–voltage characteristics of superconductor–insulator–semiconductor (S1–I–S2) tunnel junctions, where superconducting electrode S2 is a thin nanowire, are studied experimentally. The observed blurring of the gap singularities is interpreted as a manifestation of the order parameter quantum fluctuations. We propose a model taking into account the broadening of the density of states due to the interaction of electrons with the Mooij–Schön plasmon mode emerging in a quasi-one-dimensional superconducting channel in the regime of quantum fluctuations of the order parameter. The model gives results that are in a reasonable qualitative agreement with the experimental data.