The Evolution of Statehood. From Early State to Global Society

The present book is entitled ‘The Evolution of Statehood. From Early States to Global Society’. Such a combination is not accidental. Without analysis of the statehood development, it is almost impossible to understand the course of human history. That is why it is so important to deduce the correlation of the state development and social evolution (historical process).

The transition to statehood appears to be one of the most crucial changes in the mankind historical development. The state has been the core of the society’s life and, no matter to what extent we amplify our knowledge of the past, history is first of all the history of states and rulers, wars and politics. Most of historians and social scientists deal with state in this or that aspect. It seems that with such an approach everything should be paradigmatically clear. But unfortunately it is just the other way round. Numerous and most serious problems, including the following: How did the state appear and what alternatives did it have? What is the state proper? Which necessary features and attributes it has? Which main evolutionary stages has it passed as a structure? Were Athens and Rome states? What is the direction of the modern state development? – not only remain open to question but in many senses are unsolved. So it is always interesting and useful to consider these subjects. 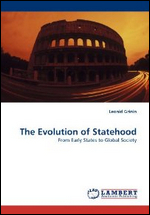 Императорская Россия
Анисимов Е. В. СПб.: Питер, 2008.
Origins of Globalization
Grinin L. E., Korotayev A. In bk.: Globalistics and Globalization Studies: Theories, Research & Teaching. Volgograd: Uchitel, 2013. P. 8-35.
In this article we analyze processes and scales of global integration in historical perspective, starting with the Agrarian Revolution. We connect the main phases of historical globalization with the processes of the development of the Afroeurasian world-system. In the framework of the Afroeurasian worldsystem the integration began several millennia BCE. In it the continental and supracontinental links became so developed long before the Great Geographic Discoveries and thus they could well be denoted as global (albeit in a somehow limited sense). Among some researchers there is still a tendency to underestimate the scale of those links in the pre-Industrial era; thus, it appeared necessary to provide additional empirical support for our statement. It also turned necessary to apply a special methodology (which necessitated the use of the world-system approach). We analyze some versions of periodization of globalization history. We also propose our own periodization of the globalization history basing on the growth of the scale of intersocietal links as an indicator of the level of globalization development.
Educational tourism as technology of university education: experience of one project in Russia and the USA (philosophic notes)
Shalaeva A. In bk.: World universities congress proceedings. Ankara: Pozitif Printing, 2010. P. 296-299.