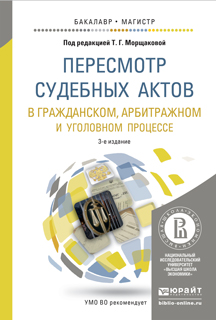 The article analyzes legal regulations of the criminal proceeding resumption due to new or newly discovered facts in terms of advantages and disadvantages of this procedure. It explores the nature and content of this kind of judicial proceedings intended to correct miscarriages of justice. According to the author, this mechanism can and should be used for the elimination of judicial errors, not only when there is no more opportunities to correct such errors in cassation or in the court supervision. In this sense, it should not be viewed as a reserve in relation to such proceedings. Despite the widespread opinion, the author tries to prove that there is nothing special or extraordinary about this mechanisms, since it is not used instead of or after other opportunities of judicial revision have been exhausted, but quite independently, i.e. in case of new facts that either appeared after the process or existed before, but were not known to the court. The author sees the opportunities to improve the human rights capacity of the institution in the continuous improvement judicial procedures, elimination of judicial miscarriages as well as in giving the interested parties the right of appeal to the appropriate court with a petition for the revision of the sentence or any other decision, if there are grounds for this.